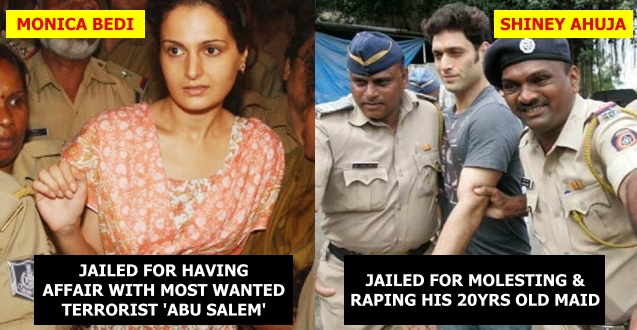 Bollywood celebrities may play the role of the positive characters on screen but do not able to pull off the image off-screen and end up violating the law, breaking the rule of various criminal acts.
Some cases fade away with time while some resurface from time to time. A number of celebrities have managed to put themselves in the wrongful situation.

Let’s go through 10 such Bollywood celebrities and their criminal records.

This versatile actor was accused in 2018 by his estranged wife who claimed that Siddiqui was spying on her and acquired the call details and records of her number. However, he denied all allegations.

Actor Fardeen Khan’s drug addiction almost cost him a visit to jail after he was busted while attempting to buy cocaine in May 2001. Since the actor plead guilty and denied any intentions of further sale of the drugs, he was let off after a de-addiction treatment.

After the Biopic of Sanjay Dutt everyone knows the story of how Sanjay Dutt led to the controversial life. After the Mumbai serial blast, the actor was arrested under the Arms Act and was convicted for possessing weapons illegally in a case linked to the 1993 serial blasts that killed 257 people in Mumbai. Since then he was in and out a relationship with prison for 23 long years.

Shiney Ahuja case literally shocked entire Bollywood. Shiney in 2009 was accused of raping his maid. She was 20 years old and he had even molested her before. Shiney had denied the charges at first, but eventually gave in and confessed.

It is believed that he was somehow involved in the death of Jiah Khan though nothing has been proven yet.

Rahul Bhatt who is the son of filmmaker Mahesh Bhatt was in close proximity of David Jeadley who conspired the 26/11 attacks. He was scanned by the anti terror agencies for involvement.

The actor got in trouble for rash driving which causes an accident injuring two people He was asked to spend 15 days in jail. Instead, John Abraham just paid a bail of Rs. 1,500.

The heartthrob of India was accused in 2012 for misbehaving with Mumbai Cricket Association officials and Manhandling security personnel at the Wankhede Stadium in 2012 and was banned for 5 years, although after five years Shahrukh Khan bought Wankhede stadium.

The yesteryear actress Monica Bedi served two years in jail in Portugal for forging her travel documents. She also had an affair with one of the most wanted terrorists in the world, Abu Salem. The two were caught and jailed. While Monica has now got out, her boyfriend continues to rot in prison.

Salman khan is another bad boy of the film industry. He had many criminal cases linked with his name. From the killing of two black bucks to the hit and run case, Salman Khan visited the police station and courts many times. Recently he got a big relief from the court, but his experiences with criminal cases are not that good.