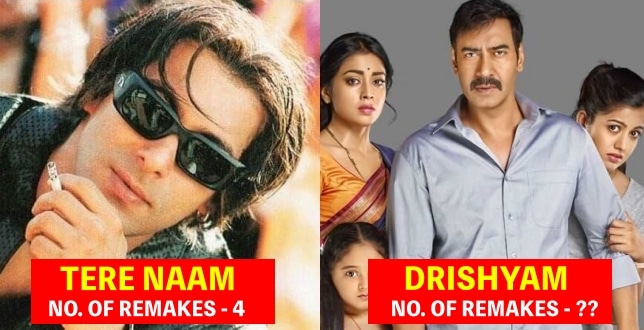 With the diverse nation like India , many cultures and religions are related and so is the way to show this diversity . One such method of showing this is the film industry . Audience keep on waiting for the blockbusters and in this context film makers work hard to keep upto the expectations of the public .

When a film is hit in the industry , it has a remake in many other languages .

Our today’s story is related to the same .

Let’s see some of the movies which have remakes in other languages too.

The Malayalam movie Manichitrathazhu (1993) was the highest grossing of the year 1993. Critics acclaimed it to be one of the best film . It was remade in four times in different languages ie . Tamil, Kannada, Bengali, and Hindi.

The action packed film Okkadu was a hit and audience loved it . The film has been remade four different times in various languages.The names were Gilli in Tamil, Ajay in Kannada, Jor in Bengali, and Tevar in Hindi.

The real police stunt based film Sammy which was again a hit has been remade as Lakshmi Narasimha in Telugu, as Barood (2004) in Bengali, as Ayya (2005) in Kannada, and as Policegiri in Hindi.

The blockbuster film Sethu which was released in the year 1999 , is a true incident based film . It bagged a lot of appreciation by the audience. Later it’s remake ,Tere Naam, was a block-buster film of Salman Khan . Sethu has been remade as Huchcha in Kannada, Seshu in Telugu.

One of the biggest comic block-buster Gol Maal , directed by Hrishikesh Mukherjee starring Amol Palekar was released in the year 1979 . The film was remade as Thillu Mullu in Tamil, as Aasegobba Meesegobba in Kannada, as Simhavalan Menon in Malayalam.Also director Rohit Shetty made film Bol Bachchan which was inspired by this epic movie.

How can we forget 2nd October .. (wink) .Original Drishyam starred Mohanlal in the lead roles. Drishyam was then remade five times, as Drushyam in Telugu, as Drishya in Kannada, as Papanasam in Tamil, as Drishyam in Hindi, and as Dharamyudhya in Sinhalese.

Telegu film Pokiri which starred Mahesh Babu as lead and
Ileana D’Cruz opposite to him. After the success of the film , it had other remakes as well which were in Tamil , Hindi, and Kannada.

Nuvvostanante Nenoddantana which was released in the year 2005 was a great hit . It was so much loved by the audience that directors remade it in 7 languages . That’s a big one , I must say…

The original film Charlie Chaplin (2002) which had Prabhu Deva and Prabhu Ganesan in the lead roles was a successful one . It’s the first Indian movie to be officially remade in six different Indian languages.