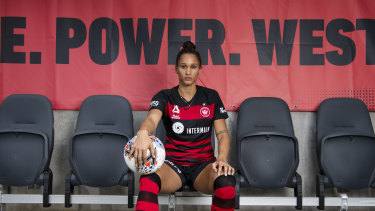 Sydney FC striker Lindsay Agnew had to travel half a world away to get another chance at a result which evaded her throughout her career in North America: a win over Western Sydney Wanderers’ Lynn Williams.

Canadian striker Agnew has come against the US international plenty of times while playing in the National Women’s Soccer League in the USA but has never been on the winning side. Whether it was at Washington Spirit or Houston Dash, Agnew could never beat Williams’ North Carolina Courage side but Saturday afternoon’s W-League derby at Cromer Park gives Agnew another chance to gain that elusive victory.

“They are always a good battle but she plays for NC Courage and they have always had a strong team. I haven’t won a lot of the games against her team but I am looking for that first win against her this weekend,” Agnew said. “I am excited for the challenge; she is an unbelievable player, she has a lot of speed, talent and unbelievable finishing.”

Agnew only arrived at the Sky Blues two weeks ago, moving to Sydney as a replacement for Matildas star Caitlin Foord, who has joined Arsenal. The Canadian international already has a personal motivation to win a derby she knew little about before moving to Australia. For her Sydney FC teammates, it’s an opportunity to atone for their 5-0 derby defeat to the Wanderers in December. That humiliating defeat has lingered in the minds of the players who have enjoyed the lion’s share of past triumphs and Agnew says that has been the common theme among the players.

“It’s been a point of discussion about how we can go in this game, that game came early in the season and the team has come a long way. It will be a completely different look come this game,” she said. “They have been talking about the formation they play, the style they like to play and the things that went wrong in that last game. Everyone is really excited, especially after a long break going into this game.”

Western Sydney will be without midfielder Vesna Milivojevic after she sealed a move overseas. The club granted her a release on Friday afternoon to move to a Balkan club.

“Midfielder Vesna Milivojevic has today parted ways with the club by mutual consent to pursue an overseas opportunity,” the club said in a statement. “The Western Sydney local featured in five matches for the club this Westfield W-League season after joining from National Premier League side Bankstown City.”

The Wanderers will elevate scholarship player Tiana Jaber to the senior squad, handing her a professional contract in the W-League. After Milivojevic’s departure, the Wanderers elevated a handful of youngsters to the W-League team on Friday with Rosie Galea, Chloe Middleton, Sophie Magus and Danika Matos handed scholarship deals for the remainder of the season.