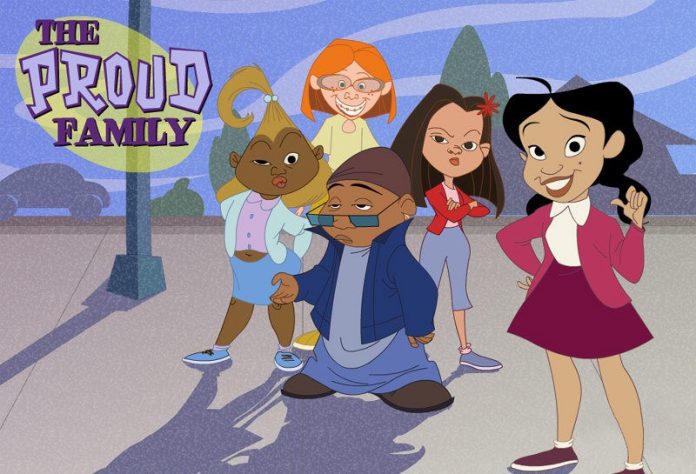 The Proud Family was one of the coolest and funniest shows on Disney. The animation was hip, the characters were hilarious, and it was just pure joy. That’s why when the show returned on Disney+ fans around the world rejoiced. Those passionate fans were heard loud and clear by Disney, who’s now making Proud Family: Louder and Prouder.

The series premiered on the Disney Channel 18 years ago. All these years later, it’s still beloved and talked about. Now, Disney+ has greenlighted The Proud Family: Louder and Proud with the original cast and creative team returning. Creators and executive Bruce W. Smith and Ralph Farquhar are back at the helm along with story editor Calvin Brown.

A Lot More Stories to Tell

The show will jump right back into the adventures of Penny Proud and her family, including her parents Oscar and Trudy, siblings BeBe and CeCe, Uncle Bobby, and grandmother, Suga Mama. Penny’s original friends are all back, too. The whole gang is returning and I, for one, cannot wait to hear the great Tony Davidson voicing Oscar Proud again.

In a statement, Smith and Farquhar said they have a whole lot more stories to tell about the Proud Family:

“In our minds, the show never really went away, as we still had tons of stories left to tell. It’s the perfect time to bring back this show, and we can’t wait to take fans, old and new alike, on this journey with us.”

As of right now, there’s no premiere date or any suggestion of when the show might return. Expect a new upgrade in the animation at the very least, although the original show still looks beautiful.

With Proud Family available on Disney+, it’s available to a whole new generation of kids to experience. Every old episode is currently available. The show, which ran from 2001 to 2005, has only increased its cult following over the years and continues to do so. There’s no better time for the show to return. It was hilarious and poignant, but it was also inclusive had something to say. It’ll be fascinating to watch the family in 2020 and beyond.

In a statement, Agnes Chu, SVP Content at Disney+, shared the same feeling of excitement fans are feeling today over the announcement:

“The show’s humor and relatable stories are as relevant with audiences today as ever. Our audiences have loved rediscovering their favorite episodes of The Proud Family, and we’re excited Bruce, Ralph, Calvin and the returning cast are creating new stories for their new home on Disney+.”

Hopefully, Proud Family: Louder and Prouder has an easier road to reaching Disney+ than a few of their other shows. Recently, Disney+ has struggled with two major programs, their Lizzie McGuire reboot, and spinoff of Love, Simon. Disney+ just moved the spinoff, titled Love, Victor, to Hulu citing the adult content.

The story goes Disney+ believed the alcoholic consumption and sexual exploration on the show weren’t right for the streaming service. Others interpreted the move as Disney — a company that almost exclusively portrays heterosexuals — don’t view the LGBTG themes as “family-friendly.” Considering Disney’s past in terms of representation, that sounds right.

“Sounds familiar,” Hillary Duff responded to the story. Disney halted production on the Lizzie McGuire reboot after only two episodes were filmed. Again, Disney+ felt the show was too adult for their platform, despite greenlighting the vision for the reboot in the first place. That show, coincidentally, featured an openly gay character and, again, there was a problem for Disney+. Very disappointing, Disney+, but not surprising. At least they got something right by bringing back the Proud Family.