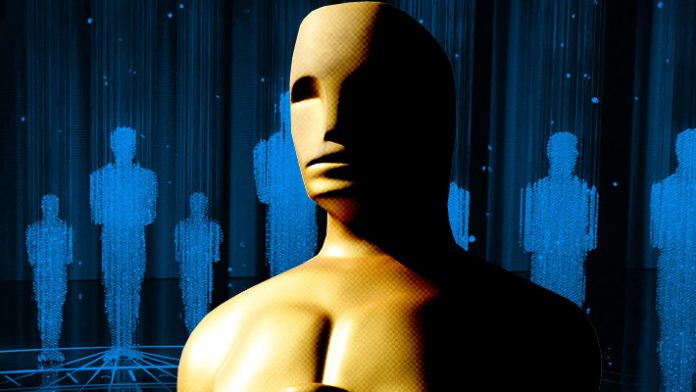 Three years into the Trump presidency, the entertainment industry still hasn’t come to terms with the end of the Obama era. The collective Hollywood braintrust is so rudderless that, for the second year in a row, the Oscars won’t have a host. If the Oscars are the showbiz Super Bowl, we’re in year two of the Academy deciding a halftime show wasn’t worth the effort (not exactly a radical notion, given how many people whined about Shakira and J.Lo).

Partly this dates back to last year’s announcement that Kevin Hart would host, followed by the controversy over some of his past homophobic jokes and tweets. People demanded that Hart apologize, Hart said he wouldn’t because he already had, then stepped down as host, then apologized anyway but still didn’t want to host… honestly, just trying to keep up is a little bit exhausting, isn’t it? Who could blame the Academy for just saying fuck it and going host-less? If Kevin Hart is too controversial, what does a safe choice look like? (Please don’t say Billy Crystal)

But this is also bigger than Kevin Hart and it’s bigger than the Oscars hosting gig being a thankless job. We’ve entered into a prolonged period of general ambivalence towards, and confusion about, the comedic gesture in general. What is the use of comedy in 2020?

To understand where we are, it helps to know where we were. In the early aughts, when the George W. Bush administration was off starting the Iraq War while maintaining sky-high approval ratings and lying to the public as a matter of course, being left/progressive/anti-war felt like a very lonely proposition. It was something you didn’t want to say too loudly in front of mixed company. This was a time when the Dixie Chicks essentially got blacklisted from the radio for saying they were ashamed that George W. Bush was from Texas. As bleak and tragicomic as the Trump era can be for anyone who isn’t a diaper-wearing shitposter, there’s no counterpart for the Bush era’s punishment of people who simply expressed shame about the president. By contrast, Donald Trump is essentially a cartoon of our most negative national stereotypes made flesh; being performatively ashamed of him is the national sport.

In the context of the Bush era, things like Jon Stewart’s The Daily Show — which dedicated a half-hour of every night to calling out the hypocrisy of Bush officials and Fox News anchors — really did feel like a beacon in the darkness. Somewhere in my house I still have a “Jon Stewart ’08” t-shirt I had made in the darkest days of mainstream media warmongering. Which is a little embarrassing to admit now, but felt entirely understandable in the context of the times. When Steven Colbert was the featured speaker at the 2006 White House Correspondents Dinner and brutally roasted George W. Bush straight to his face, it was one of the most ballsy things many of us had ever seen. It was also incredibly funny. “I stand by this man. I stand by this man because he stands for things. Not only for things, he stands on things. Things like aircraft carriers, and rubble, and recently flooded city squares.”

When Obama won the election in 2008 (perhaps not the furthest left candidate, but the furthest left of any mainstream candidate at the time, and unthinkable even a year earlier that a black guy with “Hussein” in his name could one day be president) it felt like maybe all that shit-talking we’d done to make ourselves feel better for the previous seven or eight years had actually accomplished something. Comedy felt not only fun but maybe even important. It wasn’t, of course — it was just a dumb thing we did to entertain ourselves. Still, the timing made it easy to confuse.

The idea of “comedian as bold truth-teller” gained steam even as the Obama disappointments mounted. At some point in the early 20-teens (I’m sorry we don’t have better names for these eras yet) we tacitly acknowledged Louis CK as the president of comedy, and by extension that he was the nation’s unvarnished conscience. It was something CK himself probably never asked for and anyone who understood comedy could see was a terrible idea, but to make a long story short, it backfired spectacularly. Now CK is, like everything else, another front in the ever-exhausting culture war.

What is the point of comedy in the Trump era? There was a time when pointing out hypocrisy seemed like effective political action, and comedy is great at identifying hypocrisy. But is the use of that with a president who makes sport of being a hypocrite, at a time when the refrain, “there really is a tweet for everything” identifying Trump saying the opposite of what he’s now doing has become a meme unto itself?

Trump presents several challenges to comedy. By being proudly, openly hypocritical he makes identifying his hypocrisy seem pointless. By being widely despised and not even that popular (he was elected with barely 27% of eligible voters in an election where the other candidate received three million more votes), he even makes hating him seem kind of hack. And then there are his rallies and public statements, which feel almost specifically designed to render parody obsolete. How could you even parody a world leader who recently spent 10 minutes riffing on dishwashers, and how you have to keep pressing the button nowadays?

Donald Trump makes satire all but impossible. It simply cannot keep up. Back to the Future 2 already imagined this future (Biff Tannen was famously based on Trump) and even that never dreamed of rubes chanting Biff’s name while he did call-and-response bits about clogging the toilet.

Comedy relies so much on story twists and surprise, and reality these days is constantly blowing out our internal surprise circuitry. Being surprised is all but impossible.

Ahh, but the Oscars, surely an epic self-suck gathering the nation’s foremost limousine liberals and the dynastically famous for a night of what was designed as a union-busting scheme would be fertile ground for comedy, right? One would think, but then, the Oscar audience has always been notoriously touchy. Whether it be Sean Penn publicly disavowing Chris Rock’s joke about Jude Law being in lots of movies in 2005, or David Letterman bombing with his “Oprah-Uma” joke from 10 years earlier, this is clearly a group of people who aren’t great at taking a joke.

So in some ways, the Oscars being a crappy, thankless gig for a comedian is nothing new, and yet it also comes with an added degree of scrutiny and grief these days. Ah, but there’s more! The Golden Globes this year brought back Ricky Gervais to host. Who, no matter how annoying you find him lately (and I’m right there with you), landed some solid zingers in between grating smirks. My personal favorite: “Once Upon a Time in Hollywood is nearly three hours long. Leonardo DiCaprio attended the premiere and by the end his date was too old for him.” That’s a good joke! But it was barely out of his mouth before every right-wing chud with an anime avatar was praising Gervais for “eviscerating” and “destroying” “woke Hollywood.” Who wants to risk accidentally making friends with Ben Shapiro? So most mainstream comedians retreat back into safe territory, making easy Trump jokes that can bring ex-Sanders and ex-Clinton voters together in mild applause. The idea of doing jokes for applause and edification instead of laughs has so infected mainstream comedy as to almost subsume it (see SNL’s infamous singing of “Hallelujah” after the 2016 election).

The one idea conservative shit-posters and nostalgic Obama libs seem to agree on is the comedian as bold truth-teller. It’s a mistaken idea that’s killing comedy, and it’s the reason we don’t have an Oscars host for two years running. At some point, we need to admit that jokes alone can’t bring down the powerful. That they don’t express some higher truth. They can, but really they’re just miniature stories with surprise endings, or odd construction. Sometimes jokes express incredibly small truths. As a lapsed stand-up comedian who once devoured every book of terrible jokes I could get my hands on, I’ve often used my ability to retain hacky zingers precisely to avoid truth-telling — as the kind of campfire stories you trade with acquaintances and distant relatives with whom you otherwise wouldn’t have much to agree on.

Jokes are like folk songs or oral traditions or family recipes in that way, stories that have been told for who even knows how long that each generation puts their own little spin on. Isn’t that more fun than hearing someone say something you agree with?

Above all, jokes are not that important. We desperately need to take comedy off its pedestal so that we can enjoy it again.