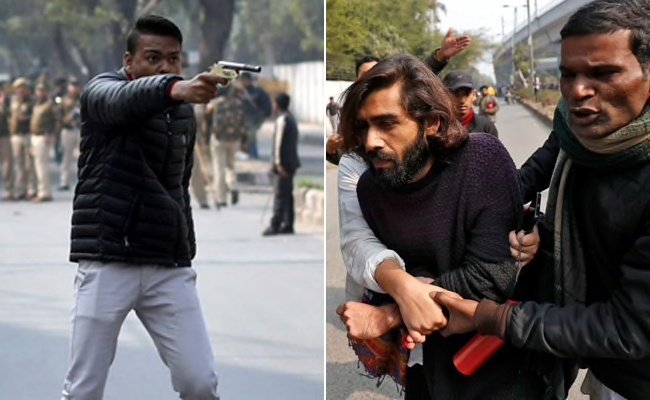 A man who has identified himself as Gulshan (name changed) started shooting near the Jamia Milia Islamia University in Delhi, injuring one student, during ongoing protests against the Citizenship Amendment Act. In a video that has now gone viral, the man can be seen brandishing his gun while journalists gather around him trying to capture his antics. The Police has taken him into custody and the injured student is receiving due treatment.

Even as investigations are underway to ascertain his identity and discover his motivations, usual suspects have already jumped in to blame the BJP over the incident. Anurag Thakur is being targeted particularly for the slogan that he raised where he said anti-national elements ought to be shot.

It’s pertinent to mention here that investigation into the matter hasn’t been completed and it could very well be that the entire thing was staged. That possibility can certainly not be ruled out. People on social media have also raised suspicions. Given past record where attempts have been made to invent the ‘Hindu Terror’ bogey, due caution is advised before one comes to any conclusion without any thorough investigation into the whole thing. Posts from his Facebook profile have also gone viral on social media, however, one ought to wait for the investigation to be completed as the Facebook posts could very well be part of the staged event.

Having said that, the manner in which the Leftists have jumped in to blame the BJP for the matter is indeed nauseating. If the Left was capable of any decency, then they would have taken the moment to reflect on their conduct ever since the Citizenship Amendment Act has been passed. From their conduct, it has been clear that they seek to unleash chaos and anarchy across the streets of the country. And what we witnessed at Jamia today in Delhi was their chicken coming home to roost.

From the beginning of the protests against the Citizenship Amendment Act, there has been ceaseless provocation of Hindus. The sacred Swastika was insulted, the holy Aum was twisted into a Nazi symbol, slogans of ‘Hinduon se Azadi‘ and ‘Jinnah Wali Azadi‘ were raised at these protests, and all this while, the Left has continued to defend these protests and claimed that the anti-Hindu protesters were actually protesting to save the constitution when it was definitely not the case.

Even more worryingly, attempts have also been made to defend Sharjeel Imam, the mastermind of the Shaheen Bagh protests, who wanted to cut off North East India from the rest of the country by blocking the Chicken’s Neck. It is also being reported that he has confessed that he wants to convert India into an Islamic State. If all this weren’t enough, it has been clear from his adulation of Jinnah that he wishes to unleash civil war in the country in an effort to achieve his Radical Islamic objectives. In spite of it, or maybe because of it, the Left has continued to defend him and has even demanded his release.

The Shaheen Bagh protests have also caused immense trouble for the ordinary citizen of Delhi. They were getting increasingly frustrated with the manner in which the national capital was being held hostage by radical Islamic fundamentalists. An ambulance was prevented from moving forward by the protesters at Shaheen Bagh and as a consequence, the condition of a woman has turned critical. One female shopkeeper was forced to use red chilli powder in order to fend off anti-CAA rioters who threatened her shop.

It was only a matter of time before the continuous provocation led to some sort of response from a wayward citizen who decided that he had enough of it. This is precisely what the Left and the opposition political parties wanted. They want to burn the country to the ground so that they get to rule over it. And now, due to the actions of one Gulshan, they might have just got their wish.

It also needs to be mentioned here that the anti-CAA protests have never been peaceful. They have been violent, reckless and against the territorial integrity of the Indian nation from the onset. Only yesterday, Neeraj Prajapati, a Hindu died after a pro-CAA rally was attacked viciously by a Muslim mob in Jharkhand. Only yesterday, a bunch of anti-CAA and anti-NRC protesters were attacked by goons allegedly associated with the Trinamool Congress. Two people died as a consequence and yet, the Liberal shall not weep for them as the deaths do not fit their narrative.

The Left and opposition political parties always preach that we, as a society, need to understand why a Muslim is motivated to take up arms against the nation and country. However, not a single liberal will dare to ask themselves why was one Gulshan driven to take a gun at Jamia and open fire. No liberal will dare ask why Gulshan did what he did. It’s always WE, THE PEOPLE who must continuously introspect and grovel before Radical Islam and ask ourselves why Muslims are drawn towards terrorism. Never would a liberal introspect why Gulshan, who is claimed to be a Hindu, was driven towards violence even as the anti-CAA protesters continuously engage in provoking Hindus and outraging the sentiments of the Hindu community.

Actions have consequences. There is a reaction to every action. None of us would endorse the conduct of Gulshan but it needs to be understood that his actions were not borne in a vacuum. His actions are a consequence of a chain of events set in motion by the proponents of Radical Islam in collaboration with liberals and opposition political parties. It also doesn’t need special mention that the people most happy with the actions of Gulshan aren’t the pro-CAA crowd, the BJP or even the ordinary Hindu. The people who are most happy with the recent developments are those who want a civil war in the country, the same people who seek to undermine India’s territorial integrity.

Chaos is a ladder, yes, but it’s one that no one can control. The proponents of Radical Islam, liberals and opposition political parties wanted to unleash chaos in the country but there are fundamental truths they do not understand. Humans unleash chaos fully convinced that they are the ones who could possibly benefit from it. However, Chaos is a cruel Mother and once she is unleashed, there’s no way anyone could possibly know where the outcome of it would be. The assorted cabal of anti-India elements may like to believe that only they stand to gain from the Chaos they have unleashed but the indomitable spirit of the Hindu Civilization might very well surprise them.

Update: It has been revealed that the suspect of Jamia shooting may be a minor. In accordance with relevant laws, his name has been changed after this revelation came to light.