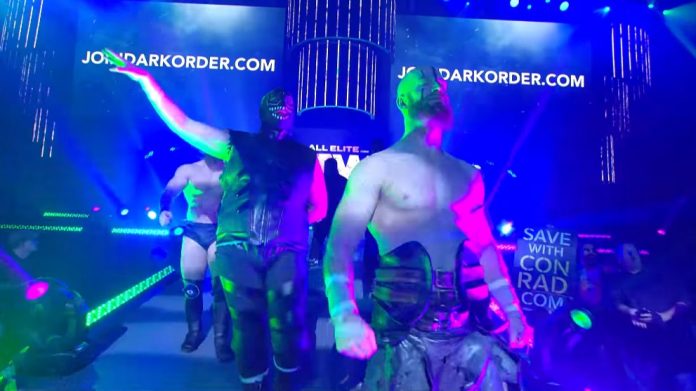 Previously on the Ins and Outs of AEW Dark: The Nightmare Collective fell apart, Orange Cassidy faced off against Tully Blanchard, and Kenny Omega and Riho faced Kip Sabian and Penelope Ford in a Found Footage match.

If you’d like to keep up with our ongoing coverage of AEW’s YouTube series that showcases the dark matches from the previous week’s Dynamite, you can follow the tag here. You should also be keeping up Brandon Stroud’s Ins and Outs of AEW Dynamite for recaps of AEW’s flagship show.

First of all, you can watch AEW Dark here:

All In: Going Full Joshi

This is a non-title match, which I guess it has to be because a recurring guest star like Shoko Nakajima is never going to have the “wins and losses matter” record for a shot at the title, even if she beat the champion in a tag match, which Shoko did with Bea Priestley at Fight For The Fallen, when Riho was paired with Britt Baker, who got concussed and tried to tag the wrong person.

Putting all that aside, Nakajima is super-fun and has great in-ring chemistry with Riho. I’m not one of those people who thinks Riho can’t work as a champion because of her size, but I do think there’s something especially magical about watching her in the ring with another quick and tiny person. When AEW started, there were a lot of conversations about them bringing Joshi wrestling to mainstream American audiences, and then it turned out that they can barely spare the time and booking attention for one women’s division, let alone two, so it’s been a lot more mixed together. This match is a purely Joshi experience, and I always enjoy that.

It’s interesting to have Riho on Dark when they’ve made a storyline element out of her not being around on Dynamite. Does this match count as being around? I mean Britt Baker is the main person making these criticisms, and she’s officially unhinged now, so they can go however they want with it. I for one will be a bit sad if Riho loses the title this week. She’s a lot of fun to watch in the ring, and this match was a great reminder in that regard.

All In: Kiss Havoc And Let Slip The Dogs Of The Midcard

Jimmy Havoc and Sonny Kiss are two wrestlers I really like, and this has kind of been an AEW midcard dream match for me, so I was excited it finally happened, and they actually gave it enough time to be a real match. Havoc has a reputation for viciousness, and it’s interesting to see Kiss respond to that kind of aggression.

Sonny Kiss, as Taz on commentary never stopped pointing, has a background in the performing arts that’s different from most wrestlers, so I like seeing him in those moments when the fight becomes a bit more like a fight, and how well he can respond in kind without letting go of his — let’s say — effervescent flamboyance.

And yeah, it would have been cool to actually see Sonny win a match, but at least he got some offense in against Havoc. Nothing that happened here makes it seem like Sonny Kiss is in line for a push anytime soon, but it does seem like he might get some more singles matches going forward, and that’s a step in the right direction.

After the match Doctor Luther appears from elsewhere to challenge Jimmy Havoc. I guess with the Nightmare Collective over and done, Luther doesn’t have anything left to do except go after the other “death match” guy. So fine, do that. I don’t have much invested in Luther (I’ll fully admit I was one of the many people who reacted to his AEW debut with a “who?”), but if he and Jimmy want to staple things to each other for ten or fifteen minutes, I’ll give it a watch.

AEW women’s booking isn’t parallel to WWE booking right at this moment (and it’s a weird moment), but it certainly reminds me of frustrations I’ve hard with WWE’s women’s divisions at moments in the past. Mainly that the only women with stuff to do are usually whichever women are in the title picture. So somebody like Hikaru Shida who’s had her turn against the current champion and isn’t do a new one yet has nothing to do except fight meaningless matches with the sole goal of reminding us she’s good.

And don’t get me wrong– Hikaru Shida is great! I think she could be one of AEW’s top stars, even without full English promos. But what’s she doing fighting local talent (no offense to Cassandra Golden) over nothing instead of having a feud with somebody? Now obviously the big non-title women’s storyline was meant to be the Nightmare Collective and that didn’t work out, but let’s see the next thing!

Maybe since Britt Baker just knocked out another Joshi girl’s teeth, that can lead to Shida attempting to standing up to the sadistic dentist, like a Japanese Seymour Krelborn with only a kendo stick instead of a man-eating plant. Something like that. Kris Statlander is also left with nothing to do by the Nightmare Collapse, and Big Swole and at least two blonde European girls are around too. Build some stories!

All Out: Monsters And Dinosaurs

This was a fine match between Jurassic Express and the Dark Order, but the whole Dark Order thing is starting to get tedious for me. I feel like they’re just kind of biding time until Matt Hardy’s WWE contract is up and they can finally reveal the Broken Exalted Leader. So right now, even when the matches are pretty fun, it seems like they’re kind of going around in circles.

I do feel like they’ve done enough work in getting Marko Stunt over as a real wrestler (at least among those of us who won’t hate him forever for being small) that while it’s not surprising when he gets pinned by guys like Stu Grayson and Evil Uno, it actually feels like a loss instead of just the only thing that could actually happen.

But at the same time, it’s been months since the Dark Order tried to recruit Stunt and Jungle Boy, and now they’re just fighting them (and beating them down post match) all over again.

And what about Christopher Daniels? There have been hints about him and the Dark Order for a while, but here he is running out with the rest of SCU to save Jurassic Express from them.

I guess what it comes down to is that if you’re going to make the Dark Order about recruiting people to their ranks, we need somebody who matters more than the Beaver Boys to actually get successfully recruited. I don’t know that Christopher Daniels would be the right choice, but somebody. And if you do that right, when Matt Hardy gets here (I’m still just assuming it’s him, I could be wrong), there will be that much more prestige attached to the role he’s stepping into.

That’s all for this week. Join me next time, for more matches too elite for TV.