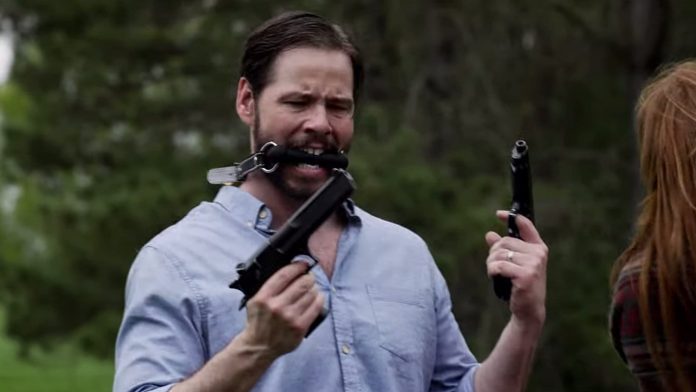 It’s been a crazy ride for The Hunt. Rarely does a movie generate as much outrage before its release, but enough people, including the president, cried foul about it that Universal canned its release. The Blumhouse horror movie, which is co-written by Damon Lindelof (Watchmen), is a horror movie reflective of the political climate and divide today, taking shots at both sides. Still, the right were very upset about a movie, so The Hunt has gone through hell to get to theaters.

Finally, in March, audiences can see the movie for themselves and make up their own minds based on the actual content, not headlines.

Universal cancelled the release of the horror-thriller shortly after the mass shootings in El Paso and Dayton. Not long after those shootings, President Trump felt the reasonable reaction was to point fingers at a movie coming out. At the time, he tweeted:

“Liberal Hollywood is Racist at the highest level, and with great Anger and Hate! They like to call themselves ‘Elite,’ but they are not Elite. In fact, it is often the people that they so strongly oppose that are actually the Elite. The movie coming out is made in order…. to inflame and cause chaos. They create their own violence, and then try to blame others. They are the true Racists, and are very bad for our Country!”

Trump’s reaction caused a wildfire. Fox News and mouthbreathers everywhere were up in arms. They were loud enough to silence a movie. For a moment, it felt like a terrible win for censorship. Now, though, it looks like it was for best that Universal shelved the movie for a while to let the outrage quiet down and have the movie speak for itself.

The Hunt is scheduled to open in theaters on March 13th. The marketing campaign is now taking on a much different tone, too. The previous trailer was more grounded and maybe too real for some, but the new trailer plays up the absurdist elements of the film. Directed by Craig Zobel (Compliance) and starring Hillary Swank, Betty Giplin, and Ike Barinholtz, The Hunt looks like it could still ruffle some feathers when it comes out, even if the new trailer plays up the silliness:

Statements from the Filmmakers

The filmmakers and producers of The Hunt have stood by their movie. Thankfully, they didn’t buckle under pressure, go away quietly, and dump it on VOD. It’s going to be seen and talked about, as it should. Producer Jason Blum even hopes the president sees the movie for himself before commenting again:

“[W]e feel the timing is absolutely right to have a conversation about a movie that is reflecting through a very absurdist lens a divided country where we believe the worst in each other. This movie is a cautionary tale for what happens when this gets carried out to its extreme. This movie does not celebrate violence. It does not celebrate stereotyping or finger-wagging or making assumptions about, in air quotes, the other side. It excoriates that behavior and, more importantly, it has fun in the process.”

What’s becoming increasingly frustrating over the last few years, especially in this political climate, is how rarely context is considered. People often see what they want to see, even in movies.

Trump and others thought The Hunt was a celebration of violence, but take one look at the filmmakers behind it, Zobel and Lindelof, and you know they’re storytellers who condemn violence, bigotry, and everything else wrong in the world. Context matters, and so does releasing a movie that sparks conversation and reflects the world today like The Hunt.