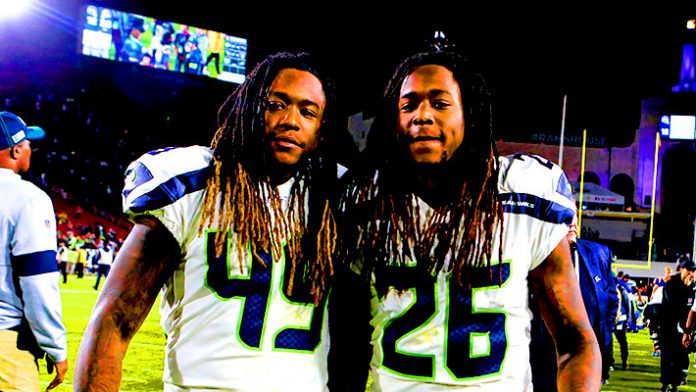 Super Bowl LIV will pit the Chiefs against the 49ers in what is expected to be one of the most competitive and exciting Super Bowls in recent memory, with the Chiefs as narrow 1.5-point favorites in Las Vegas and a robust 54.5 point total.

The Chiefs offense in particular is the headliner, with Patrick Mahomes, Travis Kelce, Tyreek Hill, and various other explosive players that have made them the most difficult offense to contain in the playoffs thus far. San Francisco is led by its defense and a dominant rushing attack on offense, and the contrast in styles between the two teams figures to make for a fascinating matchup.

To discuss these two offenses, we spoke with Shaquill and Shaquem Griffin, the Seattle Seahawks twins who have faced both of these teams in the past two years. The Griffin twins spoke with Uproxx Sports by phone on behalf of Mtn Dew Zero Sugar about the brand’s upcoming Super Bowl commercial, as well as offering thoughts on how to approach the Chiefs and Niners offenses and why this playoffs was the first time it really hit them that they’re actually NFL teammates after growing up with that dream.

Shaquill, you got to play in your first Pro Bowl last week. What was that experience like, especially with it in Orlando where you played your college ball?

Shaquill: That experience was crazy. Something I’ll definitely remember for the rest of my life. It just felt great being back home, getting a chance to come back to where I played [at UCF] and where most of it started at. Just to have my friends and family there supporting me the whole week and have my brother right beside me, that was the best part. I felt like when I made it, he made it as well and we shared the Pro Bowl together.

You mention getting to play with family around. You get to do that every week. What is that experience like in making being in the NFL that much more special?

Shaquill: That part has been crazy, and what’s funny is, I didn’t feel like it really hit me until me and my brother made that play in the playoff game against Green Bay. I was like, “Man I’m really out here playing football with my twin brother.” I think that was the first time it really hit me, and it’s been two years, so it’s funny to say, but I feel like after that sack versus Aaron Rodgers that was when I was like, “I can’t believe I’m in the NFL with my brother.”

Shaquem, what was it like for you coming in, where you’re entering the NFL and you have your brother there to provide that guidance on the team and help you with getting integrated into the system and everything in Seattle?

Shaquem: It made it an easier process for me, knowing my brother was there first. He had the gist of everything and he had a system. He knew exactly what he wanted to do, and me, it was just following the steps. Like, I’m a rookie, be seen not heard, and I understood that right away, just being a good rookie and be able to do my due diligence. I think the main part with having my brother there was watching film and preparing myself when it comes to recovery, which I knew nothing about, he made sure I got in and he taught me about it. Also when it comes to eating and having your body right. I mean, I’ll eat anything and everything and it didn’t matter what it was, and he stopped that really quick. So it was just having that guidance from someone who had a year under his belt that made my transition very easy.

Y’all have faced both of these Super Bowl teams the last two years, playing the Chiefs last year. What are the challenges preparing for a team where you know part of what they want to do is improvise once Mahomes breaks the pocket and looks for big plays, not check downs, once the original play is defended well?

Shaquill: I feel like with a team like that, the main thing you have to do is learn how to beat the guys around Patrick Mahomes. You know, Tyreek Hill and all the weapons that they have around this quarterback, you have to learn how to beat those 10 guys and let Mahomes try to figure out how on his own. That’s the main thing people forget. Mahomes is going to make his plays because he’s good at what he does, but if you can take away his best players like Tyreek Hill and take away his options and make him have to win the game on his own, that’s where the game can change.

I feel like that’s what we did once my second year. We took away his options and kept the pressure on him to where you’re either going to have to run and try to make plays on his own or you’re going to lose this game. I feel like that’s what we did well at taking away his main pieces around his offense that helps him. At the end of the day, you don’t beat Patrick Mahomes, you beat the guys around him.

When you face a guy like Mahomes, or in a different way Lamar Jackson, do you have to have a conversation as a team like, they’re going to get those plays, but we can’t let that discourage us? Because those plays can be mentally deflating when you do everything right for five seconds in the back end but they break contain and make a big play with their arm or their legs.

Shaquill: Of course, and I feel like what we do is, it’s about doing right and wrong. If my job is to cover this receiver no matter where he goes, I’m only going to focus on covering my receiver. Now if Lamar or Patrick Mahomes, whoever I’m playing, tends to break, now we gotta figure out what we can do to contain them. But saying that, it doesn’t change what I have to do, which is covering the guy in front of you no matter where he goes or for how long. I gotta make sure I do my job.

You guys are obviously very familiar with this Niners team. They’re not as explosive an offense as the Chiefs, but they seem to wear on you over the course of 60 minutes. What’s the biggest challenge they present to you as a defense?

Shaquem: I think for the most part, just speaking from the defensive side of the ball, you can’t allow Garoppolo to sit and have his feet set and throw the ball. One thing about him, and just knowing the front the Chiefs have, Frank Clark’s definitely going to get a lot of pressure on Garoppolo, and once you get his feet moving it messes up his targets and he’s not really accurate on the move as opposed to being in the pocket. I think the 49ers stick to one thing they’re not really great at, which is passing the ball. The Chiefs have shown a great job stopping the run going up against Derrick Henry from the Tennessee Titans. You show that against Henry, you should be able to show it against the 49ers, and if you make them pass, get Garoppolo off the spot, man, you’re going to have yourself a ball game.

I won’t ask for a pick unless you just want to give me one, but what do you think is going to be a big key in the Super Bowl?

Shaquem: I have too many friends on both sides, so I’m just hoping for a good game.

Shaquill: Either team that stops the run game.

Y’all are partnered with Mtn Dew Zero Sugar with their Super Bowl ad reimagining The Shining. What did y’all think of the spot when you saw it and what are you guys doing with them?

Shaquem: I feel like us being a part of this, we’re just grateful to be in partnership with Mtn Dew Zero Sugar. And just for us, to see the commercial and how everything played out is hilarious. So for us to be in partnership with them, is a tremendous blessing, cause we’ve been a fan every since growing up. Even going back to the Mountain Dew Voltage, we used to drink that as kids. We have some crazy stories.

I remember my brother took the Mountain Dew Volt and drank it all the way down — honestly, he drank that soda down too fast before a football game. It was really hot, and he literally told me, “I’m about to score. I’m about to score on this play.” And he took off and scored and then he threw up on me [laughs]. It was the red kind too. It all came out. I seen Mountain Dew Voltage twice that day.

Shaquill: In my defense, to summarize a bit, I think it’s a perfect fit to be with Mtn Dew Zero Sugar. Out of everything he said, that’s what he meant to say to summarize it up.

EDITOR’S NOTE: Mtn Dew is not and does not promote itself as an energy or performance drink and shouldn’t be consumed heavily before playing in a football game.