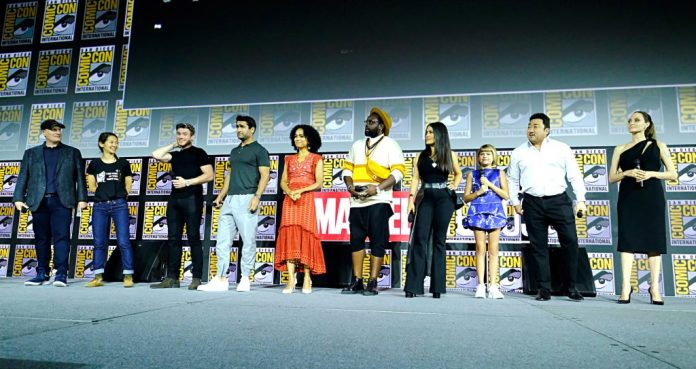 For all the Marvel Cinematic Universe has done right (like cast Taika Waititi as a rock-monster who’s best friends with a bug), there’s at least one thing it has gotten wrong: the lack of LGBTQ superheroes. As Out pointed out, “Black Panther, Wonder Woman, and Thor: Ragnarok all feature characters who are queer in their respective comics: Black Panther‘s Ayo, Thor Ragnarok‘s Valkyrie, and Wonder Woman,” but they’re not presented as such in the movies. That’s beginning to change, however. Before Thor: Love and Thunder reportedly shows Valkyrie in an an LGBTQ storyline, actor Haaz Sleiman revealed that The Eternals will have the MCU’s “first openly gay superhero.”

In an interview with Logo, the Little America star said that he plays a character who’s “married to the gay superhero Phastos [Atlanta’s Brian Tyree Henry] and we represent a gay family and have a child.” When asked if The Eternals will have a same-sex kiss, he replied, “Oh, yeah, absolutely, and it’s a beautiful, very moving kiss.” He continued:

“For me, it’s very important to show how loving and beautiful a queer family can be. Brian Tyree Henry is such a tremendous actor and brought so much beauty into this part, and at one point I saw a child in his eyes, and I think it’s important for the world to be reminded that we in the queer community were all children at one point. We forget that because we’re always depicted as sexual or rebellious. We forget to connect on that human part.”

Phastos (who, it’s worth mentioning again, is played by the great Brian Tyree Henry) is one of the Eternals, alongside Ikaris (Richard Madden), Sersi (Gemma Chan), Kingo (Kumail Nanjiani), Ajak (Salma Hayek), and Thena (Angelina Jolie), among others. Directed by Chloé Zhao, The Eternals comes out on November 6.