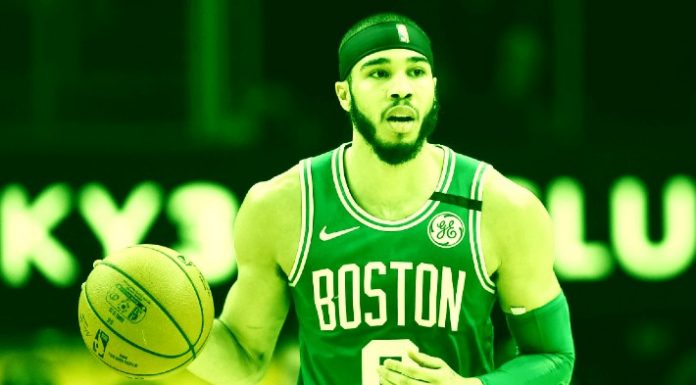 With the exception of an eight-game window in early-to-mid January, the Boston Celtics have been lights-out this season. Brad Stevens’ team did lose six of eight games between Jan. 6 and Jan. 18, including home defeats to the Spurs, Pistons and Suns. Aside from perhaps the juggernaut Milwaukee Bucks, though, each NBA team goes through something of a swoon and, with the backdrop of a 25-8 start, the Celtics are getting back to business with a scalding hot baseline of recent play.

Boston enters Tuesday’s nationally televised match-up with the Houston Rockets on an active, seven-game winning streak, climbing into sole possession of the No. 3 seed in the Eastern Conference. If not for the unbelievable run of the Toronto Raptors, the Celtics would likely be receiving more attention (and/or credit) for this binge and, even beyond the seven-game explosion, Boston is 10-1 in its last 11 games.

The Celtics have a +11.7 net rating during that 11-game period, posting top-three marks in the NBA on offense (117.2 points per 100 possessions) and defense (105.5 points allowed per 100). Making things even more impressive, Boston has been without key pieces during various stages of their eruption, with Jayson Tatum, Jaylen Brown, Gordon Hayward, Kemba Walker, Marcus Smart and Enes Kanter all sidelined in small pockets.

There are many heroes for the Celtics which, quite honestly, allows for the type of balance that can withstand the injury issues they’ve faced. Tatum has been stellar in recent days, scoring 20 points or more in nine straight appearances and averaging 26.7 points per game on 49 percent three-point shooting in that time. Brown has been excellent this season, Hayward has recaptured some of his old form, Kanter and Smart fill roles beautifully, and Walker is playing like the All-Star he was in Charlotte. Throw in a cavalcade of young players that can step up into bigger roles to fill the gaps and a big-time coach in Stevens… and the results are off the charts.

In addition to the simple acknowledgement of what has been a ridiculously impressive stretch of basketball, the Celtics should also inspire questions about whether Boston can seriously challenge Milwaukee for Eastern Conference supremacy. The Raptors have been so hot that the discussion has (kind of) happened, the Sixers have been in the vocal mix for months and even the Heat have garnered attention with their actions at the trade deadline. Meanwhile, Boston is just hanging around and, at 37-15 with a net rating that would rival any non-Bucks team in the entire league, it is time to start paying even closer attention.

Where do the Celtics land in this week’s DIME power rankings? Let’s check in.

The Bucks have been the best team in the NBA for months and they aren’t slowing down. Milwaukee is 16-2 since the calendar flipped to 2020 and, within the last week, Mike Budenholzer’s team went 4-0 with every win by double figures.

It is a testament to the Bucks that the Raptors somehow aren’t No. 1 this week. Toronto hasn’t lost a basketball game since Jan. 12 and they are riding a franchise-best winning streak of 15 games. Even if you want to make an argument about a relatively easy schedule during the stretch, it is really, really hard to win 15 NBA games in a row.

There isn’t much to flat-out concern you about the Lakers, but Los Angeles is a modest 7-5 in the last 12 games. The perfect buyout candidate hasn’t emerged yet either, leaving some uncertainty with roster balance as the playoffs loom. In taking a step back, though, the Lakers are still pretty good.

Denver ended last week with a pretty bad loss in Detroit, slipping to No. 8 in this space. The Nuggets then righted the ship with haste, winning all four games this week, including a back-to-back sweep over Portland and Utah. In an encouraging twist, it was Jamal Murray leading the way in the last three victories, and the Nuggets need him to be good.

The Clippers still inspire plenty of confidence and no one should worry. There just had to be some kind of penalty for losing to the Wolves (a team that was on a 13-games losing streak) by 27 points.

Quin Snyder’s team won 19 of 21 games. Then, the Jazz lost four games in a row. Now, Utah has won three straight and the wins came against Portland, Houston and Dallas. At some point, you just throw up your hands.

Trouble in Miami? The Heat are 8-8 in the last 16 games. There aren’t too many bad losses in the bunch, but nobody would be thrilled by that run. Miami could probably use the All-Star break and, poof, it’s here.

Furkan Korkmaz just scored 65 points in a two-game span to lead Philly to a pair of wins. That’s amazing and, bizarrely, the Sixers needed it in a big way.

The Thunder are just good at basketball. OKC is 21-7 in the last 28 games and they nearly upset Boston on a big Sunday afternoon stage. No one should be surprised by anything that this team does in a positive direction. It’s not a fluke or a hot streak.

If nothing else, it’s going to be wildly interesting to watch everything play out in Houston. They won four in a row recently before dropping the last two games but, in the big picture, it’s all about whether their extreme small-ball experiment can work.

A 5-7 record in the last 12 games isn’t fantastic by any means, though the Mavericks do have the excuse of Luka Doncic’s injury. We’ll learn a lot about Dallas after the break when they are at closer to full strength.

Projection systems still don’t love Memphis as a playoff team but, with less than 30 games remaining, they have a 2.5-game cushion on the field in the West. The Grizzlies are 14-4 in the last 18 games and, while they aren’t as “new” anymore, this remains a fantastic story.

The Blazers haven’t lost to a non-playoff team since Jan. 9. They are simply taking care of business and, well, Damian Lillard is not of this planet. He has led Portland in scoring in 16 consecutive games.

Given where they are the standings, the smart bet is to assume that the Pelicans won’t make the playoffs. That won’t be for lack of trying, though, with New Orleans boasting a 16-9 record in the last 25 games. This is a good basketball team that simply got off to a disastrous start.

Brooklyn is still six games back of the No. 6 team (Indiana) but the Nets are waking up from their slumber. They are 6-3 in the last nine games and, after a journey in the wilderness, the Nets feel like a playoff team again.

The Pacers are better than this ranking, but Indiana has lost six in a row. Teams that are supposed to be as good as the Pacers aren’t supposed to lose six games in a row. To make things worse, five of the six defeats came at home. Yikes.

Sacramento found rock-bottom in late January but, since then, the Kings are seemingly keeping the train on the tracks. The team is 6-3 in the last nine games and the losses came to the Thunder, Lakers and Bucks.

The Spurs are in the middle of their annual rodeo road trip, with eight games in a row (sandwiched around All-Star Weekend) away from San Antonio. In short, things didn’t start well, with the Spurs losing the first five contests. There are no bad losses in the bunch but, when trying to compete for the playoffs, that kind of skid isn’t great.

On the bright side, the Magic won their last game, needing to come from behind to topple the Hawks at home. More pessimistically, Orlando is 3-10 in the last 13 and, if not for the barren Eastern Conference, they’d be in real trouble in a playoff pursuit.

They’re getting to moderate effectiveness in a bizarre way, but the Wizards aren’t terrible. They are 8-9 in the last 17 and, in general, it’s fun to watch a team that can explode offensively on any given night.

After something of a promising stretch, the Suns are 1-6 in the last seven games. To be fair, that one victory was a throttling of the Rockets (by 36 points) but Phoenix hasn’t exactly been the picture of consistency this season.

The Hawks were never supposed to be as bad as they were through 40 games, with Atlanta compiling an 8-32 record due to various issues. Since then, the Hawks are 7-8 and they just added a pair of quality big men in Clint Capela and Dewayne Dedmon. They aren’t going to make the playoffs or anything, but the Hawks are suddenly looking like the team they were supposed to be.

It feels like the Knicks should be higher after winning four games in a row and, in truth, New York is playing much better basketball. Still, they were pushed to the brink against the struggling Pistons and then blew a major opportunity against the Hawks on Sunday in double-overtime. This feels like the right spot.

In the last 15 games, the Hornets are 2-13. That’s obviously quite bad. Charlotte’s only wins in that stretch were against the Knicks at home and the dreadful Pistons on the road in a game where the winning team scored 87 points. I don’t know.

As soon as it felt like the Bulls had at least a fringe chance at a playoff run, they lost five in a row. Granted, four of those games on the road and Chicago was the underdog in all five, so it was explainable… but they still lost five in a row.

It’s a mess in Detroit. Not only did they choose to give Andre Drummond away (even if that move was defensible), the Pistons just lost at home to the Knicks and Hornets within a three-night span. In all honesty, Detroit might be the worst team in the league at this very moment. That’s in play.

Minnesota stopped a 13-game losing streak by absolutely annihilating the Clippers. That was a completely bizarre result, but it kept the Wolves out of the basement this week.

The Cavs got Andre Drummond for (essentially) free and there is nothing wrong with that. In fact, it should help Cleveland this season and open some doors for the summer. With that said, the Cavs have lost 13 of the last 14 games. It’s pretty ugly up there.