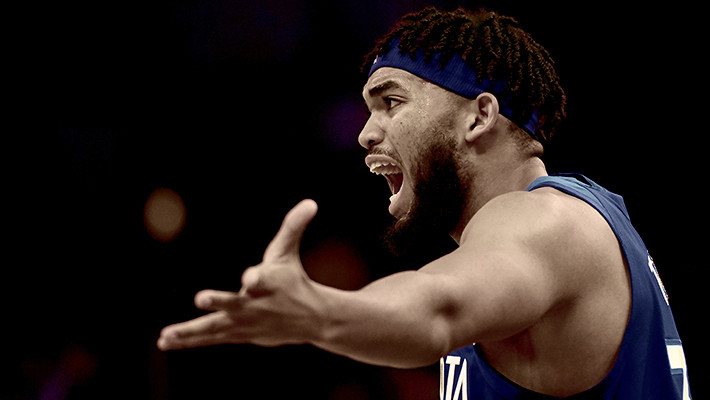 The Minnesota Timberwolves began the season with a 10-8 record and, with that strong performance, projection systems saw Karl-Anthony Towns and co. as a legitimate threat to crash the playoff party in the Western Conference. Since then, however, the Wolves have cratered completely, posting a 5-24 record and losing 10 consecutive games.

Things came to a head on Monday evening, when the Wolves were in complete control against the Sacramento Kings and held a 19-point loss entering the fourth quarter. From there, Minnesota shot itself in the foot repeatedly, culminating in an overtime loss to extend the NBA’s longest active losing streak. With that skid as the backdrop, only the Golden State Warriors have an uglier win-loss record than the Wolves in the Western Conference and, frankly, things seem dire.

It doesn’t seem like that long ago that the Wolves were able to post a 5-3 record over an eight-game period from late December to early January. When that run ended, Minnesota was 15-22 and it was completely conceivable that the dog days were over. In the days since, Monday’s collapse was the only ghastly loss, with the Wolves dropping eight games to playoff teams. Still, Minnesota simply couldn’t afford that kind of slide and chatter surrounding the trade market is likely to increase by the day.

Per Cleaning The Glass, the Wolves have under-performed their point differential by more than three games, meaning that Minnesota’s true performance level isn’t exactly indicative of its hideous 15-32 mark. That makes things even more frustrating, though, and the Wolves simply haven’t been able to execute when it counts, wavering consistently when Towns and Robert Covington leave the floor and struggling in clutch situations.

With any dream of playoff contention on life support, it will be interesting to see how the Wolves proceed. If nothing else, it will be clear to Minnesota observers that the 5-24 stretch in the months of December and January sealed their fate.

Where do the Wolves land when surveying the full league? This week’s DIME power rankings are here.

The Bucks just keep rolling. Milwaukee has won nine in a row and, on Tuesday, the Bucks thrashed the Wizards by scoring 151 points. They’re pretty good.

We’ll have to wait for the next match-up between the Lakers and Clippers after the NBA postponed the scheduled battle on Tuesday. That was the right decision, mind you, and the Lakers are understandably focused on many other things than where they land in the pecking order right now.

Kawhi and company have won six of seven, including a 4-1 road trip. The Clippers also seem quite trustworthy in a big-picture sense, and they open a four-game homestand on Thursday evening.

The schedule hasn’t been daunting for the Raptors lately, but that doesn’t diminish the impressiveness of an eight-game winning streak. Only the Bucks can claim a longer run of success, and Toronto is now sitting in sole possession of the No. 2 seed in the East.

After a bit of a lull, the Sixers have won six of seven games. That includes what was a fairly dominant win over the Lakers (without Joel Embiid in the lineup), and we’re seeing flashes of the team many expected this season.

The Jazz are still a ridiculous 19-3 in the last 22 games and everything is just fine. Utah still has to be dinged a bit for a horrid performance in their last outing, losing at home to the Rockets without James Harden, Russell Westbrook, and Clint Capela. That wasn’t fantastic.

It wasn’t a perfect week for Boston, as the Celtics lost by double digits in New Orleans. That was the second night of a back-to-back, though, and the Celtics just keep chugging along. Boston can be terrifying when they are able (and/or willing) to shorten their rotation, and that has been on display at times.

The Nuggets are feeling a bit shaky after a 3-3 stretch in the last six games. To be fair, all three losses came to quality opponents and two of them were on the road. It still would’ve been nice to steal one, but the Nuggets do have recent wins over Houston and New Orleans.

Victor Oladipo is on track to return on Wednesday and the Pacers are playing well even without him. Indiana has won seven of the last nine games, with the two losses coming away from home and against Western Conference opponents. It might take some time to integrate Oladipo but, at the very least, he gives them a jolt of talent and force on the perimeter.

The Heat have out-performed their point differential the entire way, so their record is a bit misleading anyway. Recently, though, Miami is just 8-7 in the last 15 games and, after an impossibly hot start at home, the Heat have lost two of three on their own floor. Everything is fine, but there are some concerns.

Mike D’Antoni’s bunch has seemingly emerged from the wilderness. After losing four straight, Houston just completed a 3-1 week and Eric Gordon’s 50-point explosion helped the Rockets knock off the Jazz in unexpected fashion.

Quietly, the Mavs are just 13-12 in the last 25 games after a red-hot start. Dallas still has a top-three offense during that stretch but, with some struggles defensively, they simply aren’t playing as well as their record indicates right now.

The Thunder are 23-10 in their last 33 games. This isn’t a fluke. They are a good basketball team as currently constructed.

February is approaching and the Grizzlies are almost a .500 team. That would’ve been unthinkable even a few weeks ago, but Memphis is 10-2 in the last 12 and playing fantastic basketball. At this moment, the Grizzlies have a 2.5-game lead on the No. 9 seed and have a pretty clear path to the postseason if they can maintain anything approaching their recent level of play.

With Zion Williamson in the mix, the Pelicans might have the best chance to catch the Grizzlies. New Orleans is 13-7 in the last 20 games and, in general, this is a team with all kinds of talent. The Pels and Grizzlies will match up on Friday in New Orleans in a game that everyone should be circling as appointment viewing.

The Suns have road wins over Boston, San Antonio and Dallas within the last two weeks. Phoenix is not exactly consistent but, when they flash, they flash.

Damian Lillard just averaged almost 53 points per game during a three-game stretch at home. That’s not a misprint. He’s trying to put the Blazers on his back and carry them to finish line, and he’s probably good enough to do it.

It wasn’t a great week for the Spurs, ending in three consecutive losses. All three were close-fought games but, in the end, losing to Chicago and Phoenix isn’t going to help matters in San Antonio.

Two weeks ago, the Magic were 20-21 and apparently in unassailable shape with regard to the playoffs. On cue, Orlando lost six of seven, including the last four games in a row. Suddenly, the team is in a precarious position, though the Magic have a bizarre four-day rest period this week to gather themselves.

Chicago is probably the only hope at upsetting the apple cart in the East, with only two games separating them from the No. 8 spot. The Bulls are 6-4 in the last 10 games, but Jim Boylen’s team has an upcoming road trip to Indiana, Brooklyn and Toronto that could be perilous.

A six-game losing streak left a sour taste for everyone, but the Kings bounced back at the end of the week. Sacramento picked up a pair of road wins and, while the competition level wasn’t great in those games, any victory away from home for a fringe team is a good thing.

Remember when the Nets were 16-13? Brooklyn is 3-13 since then and it is almost as if they are actively trying to keep the door to the No. 8 seed open in the East. The schedule is favorable for the upcoming week, but the Nets need some victories in a big way.

It feels like the Pistons should be even lower than this after losing to the Cavs, at home, by a 15-point margin. A recent (blowout) win over the Hawks makes this the floor, though, despite Detroit’s struggles.

As youthful teams often do, the Hawks have a propensity to get blown out and things look bad when that happens. Atlanta is still 4-4 in the last eight games and, when their best players are actually available (cough, John Collins, cough), the Hawks aren’t as bad as their record shows.

The Wizards are impossibly bad defensively. That was always going to be the case with this personnel but, in the last two games, things came to a head. First, Washington allowed 152 points to a Hawks team that currently ranks 29th in offensive rating. From there, the Wizards gave up 88 first-half points to the Bucks on a night when Giannis Antetokounmpo didn’t even play. Thank goodness the Wizards have a top-10 offense.

Following a stretch of 14 losses in 16 games, the Hornets won their last match-up. Granted, it came at home against the Knicks, but a win is a win.

The Knicks rank in the bottom seven in both offensive and defensive rating. New York still isn’t very good. We all know this, but the loss to the ice-cold Hornets was another reminder.

On the bright side, Cleveland isn’t in the basement this week, based largely on a road win over Detroit. More skeptically, the Cavs have still lost eight of the last nine and it took some “heroics” from other teams to fall below them.

The Warriors have the league’s worst record by two full games. Beyond that, Golden State is 1-14 in the last 15 games, including four consecutive unfavorable results. It’s pretty ugly right now in Oakland.

When you lose ten games in a row, you earn the No. 30 position. That’s just what happens.