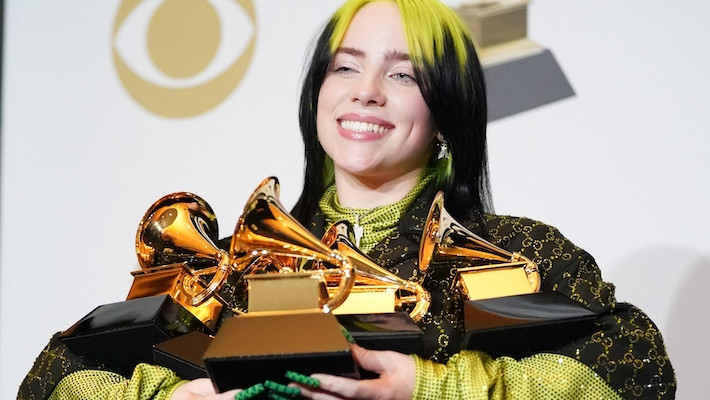 After what was a pretty dramatic lead up week itself, the 2020 Grammys ceremony did not disappoint. Just days before the ceremony, the organization put their new female CEO, who had been hired to help promote change for this year, was placed on leave, and then filed an explosive discrimination complaint. And, despite the fact that Los Angeles, the Lakers family, and the world, are mourning the tragic loss of Kobe Bryant in a helicopter accident earlier today, the show did go on.

We tracked the formal list of winners here, and you’d have to be living under a rock not to already be following just how much Billie Eilish was honored, but there was so much more to unpack when it comes to who won what and who was snubbed. Check out a highly subjective rundown of the biggest winners, losses, and upsets of this year’s ceremony.

Alicia Keys kicked off the night right: by acknowledging the deep sadness that most, if not all, attendees were experiencing over the death of Kobe Bryant. By giving space for a somber moment that acknowledged his legacy, and the dissonance of trying to celebrate on such a horrible day, Alicia’s speech cleared the air for everyone, and allowed the evening to become, in part, a celebration of Kobe’s own love for music. All throughout the night, Kobe’s jersey showed up in performances, proving just how much of an impact he had on hip-hop as well as sports.

After an incredibly rough 2019, one that included addiction, an overdose, and the aftermath of that, Demi Lovato has returned to music with the stunning, emotional new single “Anyone.” She debuted it in a live performance at the Grammys that can, even after overuse of the phrase, only be described as incredibly brave. We’re rooting for you Demi, welcome back.

This photo right here is a good representation of how Lana Del Rey and her fans feel after the Grammys made a big show of nominating Norman F*cking Rockwell for a bunch of big awards, and then doing absolutely nothing to honor it. Given the critic’s pick won top honors last year, many people had their fingers crossed that the Grammys were once again going to give Album Of The Year to a woman with a left field view of pop. Then again, they kinda did by honoring Billie. But giving that award — and all the rest — to Billie Eilish meant that a lot of other great talent was ignored. This was a lose, on the part of the Grammys, nothing could ever put Lana in that category. Nothing.

While I don’t necessarily agree with the Grammys giving all four of the big awards to Billie — and neither does she, from her reaction — it was great to see a young woman, and a pop artist, at that, getting so many big awards. Although, given the history of the Best New Artist curse, perhaps we should be a little bit worried about Billie at this point? Nah, she’s probably good. Congrats to her.

Loser: Lizzo’s genre-only wins continue the Recording Academy’s history of not giving major awards out to female artists of color

Yes, Lizzo was thrilled to win one of the first events of the night with her big Best Pop Solo Performance victory for “Truth Hurts,” and she even picked up two more over the course of the night for Best Urban Contemporary Album, and Best Traditional R&B Performance for “Jerome.” But given she was nominated in some major categories, it is a bit disappointing that the Academy didn’t give her a big win and instead relegated her to genre and racial lines. Urban is just another synonym for Black, and just like Tyler The Creator called out his Best Rap Album win as a “backhanded compliment,” the same applies to Lizzo. Again, the Academy are the losers here, not Lizzo.

Winner: Tyler The Creator finally picks up his first Grammy

No matter how he ends up feeling about this Grammy win, seeing Tyler The Creator take home a trophy was a huge win tonight. Between the adorable moment with his mother, who he credits for his success, and the ultimate petty Twitter moment after the ceremony, Tyler is celebrating to the best of his abilities. Here’s hoping that the next time he puts out an album, the academy doesn’t force it into genre categories and gives him proper Big Four consideration.

Surprise: FKA Twigs was relegated to dancing only in a Prince tribute

of course i wanted to sing at the grammys. i wasn’t asked this time but hopefully in the future. none the less what an honour. congratulations to all winners x

Again, sometimes it feels like casting pearls before swine with the Grammys. They invited FKA Twigs up onstage to dance alongside Usher’s tribute to Prince… without asking her to sing, too? This feels like it’s in direct opposition to all the things Prince most stood for when he was alive. Don’t do his legacy dirty now that he’s passed. That woman is a triple threat — don’t relegate her to using one talent.

Surprise: The “Old Town Road” to end all old town roads includes “Big” Nas, BTS, and so much more

To cap off a year that was truly legendary for him, Lil Nas X had one of the best performances of the entire night. Performing his unstoppable, record-breaking hit “Old Town Road” alongside Billy Ray Cyrus (remix king), BTS, and a surprise feature from iconic New York rapper Nas, who is, obviously, namechecked by Lil Nas X, the chapter has finally closed on this song. Or has it? Maybe this new Nas verse will shoot it back up into the chart’s stratosphere? 2020 has been a wild ride so far, so who the f*ck knows.

Winner: Tanya Tucker gets her flowers

in a collaborative move orchestrated by Brandi Carlile, who was riding high on big Grammy wins of her own, Tanya Tucker released an album that helped cement her legacy as one of the defining forces in country music. And this time, the Academy didn’t just deliver nominations, but victories, too. After fourteen nominations, fourteen trips, Tucker finally won — both Best Country Album for While I’m Livin’ and Best Country Song for “Bring My Flowers Now.” Consider the flowers brought, Ms. Tucker. 61-years-old and still going strong, we salute you.

Winner: Nipsey Hussle got his tribute — and his Grammy

Another tragic loss put a damper on this year’s Grammys — the murder of Nipsey Hussle late last spring has been resonating throughout the music industry and Los Angeles since it happened. Not only did his peers take the time to write and perform tributes to his entrepreneurial spirit and unfailing charisma and talent, but he also won a posthumous Grammy for a collaboration with DJ Khaled and John Legend. Seeing his family come onstage to accept the trophy was cathartic, to say the least. And he deserves many more awards for the role model and inspirational figure he was to so many.

Some of the artists covered are Warner Music artists. Uproxx is an independent subsidiary of Warner Music.