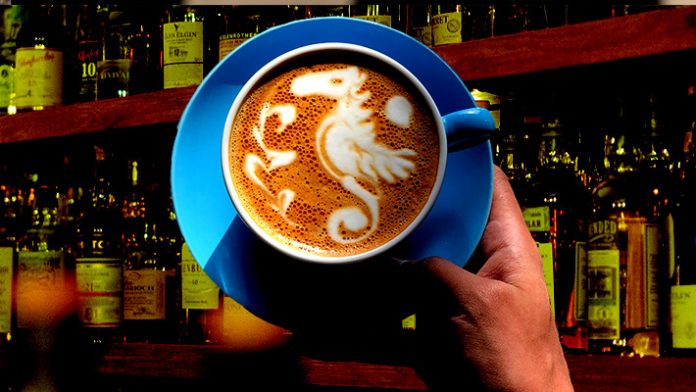 One of the best ways to warm up this winter is by sipping on a nice dram of whiskey, preferably in front of a fireplace. But, for some, whiskey can be a bit harsh on its own. So, we’re not going to judge if you prefer your whiskey mixed into a drink. A great wintry option is to spike a hot coffee with your favorite whiskey. To make the classic Irish Whiskey, you pair coffee with whiskey (usually Irish), fresh cream (or Irish Cream), and brown sugar. When made correctly, it’s boozy, warming, and chocked full of caffeine. It’ll energize you and keep you warm at the same time … and it’ll get you a little tipsy.

When mixing whiskey into coffee, David Powell, brand ambassador for Hudson Whiskey, is all about staying true to tradition. “I’d have to go with Tullamore D.E.W Irish whiskey for this one,” he says. “I’ve actually had the chance to visit their new distillery in Tullamore, and I think that what they’re doing for the distilling community out in Ireland is pretty incredible.” Powell continues, singing the praises of Irish Coffee, and recommends a visit to San Francisco’s Buena Vista Café, which serves the boozy caffeinated drink with Tullamore D.E.W. That version is considered the best Irish Coffee in the country, so you know you’re on the right track using the iconic Irish tipple in your coffee.

But, while many bartenders make theirs with Irish whiskey, they don’t all agree on which whiskey to use. That’s why we asked some of our favorite bartenders to tell us their go-to whiskeys to use to spike coffee this winter.

This is a fabulous whiskey for an Irish Coffee. It’s matured in a mix of bourbon and Oloroso sherry casks then finished in port wine barrels. It elevates the coffee, providing nuttiness and rich fruit notes that really pop on the palate. There’s also a sweetness that interplays with the bitter coffee tones. Magical stuff.

For my Irish coffee, I like to mix it with Teeling Single Malt Irish Whiskey. Teeling brings this vanilla, citrusy, and long dry, but lightly sweet, finish that compliments the coffee.

Writer’s Tears is a little floral, which makes it a great fit for an Irish coffee. It’s also unpeated, making it very smooth for this drink.

There are so many new Irish whiskey’s making their way here, so it’s cool to explore all of them on their own or in coffee of course, but the West Cork Bog Oak Cask stands out.

Will Witherow, beverage director at Live Oak in Alexandria, Virginia

For an Irish Coffee, I like to use Tullamore D.E.W Carribean Rum Cask Finish. The vanilla and demerara sugar flavors make this the perfect addition to an Irish Coffee.

Will Benedetto, director of bars for IGC Hospitality in New York City

Bushmills Black is a classic. Not too fussy but beautifully structured flavors can really bring out some of the finer notes of the coffee beans themselves. Bushmills Black works well with any coffee really but pairing it with a lighter grassier coffee varietal is ideal.

Whiskey series: Jameson may be Midleton Distillery’s most famous and best selling product, but they also make other Irish whiskeys like Powers. It is the best selling whiskey in Ireland and for good reason. Artificial caramel coloring added for appearance. Non-chill filtered though, which is always a plus! On the nose, there’s caramel, vanilla, butter, and shortbread. On the palate, there’s honey, caramel, oak, grains, and butter. Ever so lightly sweet with a light body and thin mouthfeel. Long, warm finish of oak and spices. Out of all the budget blended Irish whiskeys, this is definitely one of my favorites. It has enough substance to be interesting yet still “smooth” enough to go down easy. Rating: 7.5/10. Midleton Distillery (Pernod Ricard): “Powers Gold Label” – No Age Statement. Blended Irish Whiskey – Ireland (43.2% ABV) #Powers #PowersWhiskey #PowersGoldLabel #IrishWhiskey #Whisky #Whiskey #WhiskyPorn #WhiskeyPorn #WhiskyGram #WhiskeyGram #InstaWhisky #InstaWhiskey #Dram #InstaDram #Drink #WhiskeyTribe #BottomShelf #BecauseBottomShelfMatters

This is true pot still whiskey with no frills but quality distilling. You want to find a nice balance between some of the over-engineered stuff that gets lost in this cocktail and the kerosene some people sell as Irish whiskey. Powers Gold is the perfect sweet spot for me.

Kilbeggan Small Batch Rye is a beast in an Irish Coffee. The ginger and buttery vanilla notes complement the coffee and cream quite well.

I go for a classic Irish whiskey like Bushmills Red Bush when I make an Irish coffee. It always hits the right note and gives the drink familiarity,

As far as Irish coffees go, I’m pretty open-minded. Of course, you’ll never go wrong with a shot of Jameson in your coffee. But for a more complex flavor, Red Breast 12 Year is a nice treat at an affordable price point. I drink my Irish coffees with a splash of Irish cream as well, so I always keep a bottle of Five Farms Irish Cream on hand.

There’s so much great Irish whiskey out there. But where I come from in Queens, Jameson still reigns supreme. I love Redbreast or Middleton. But if I am going to pour it into coffee, I want to go with something that can play well. These days I like Intelligentsia French Roast blended with The Jameson Stout Cask. It brings chocolate notes for days.

At Virgil’s, we use a great Old Forester Bourbon & Kerrygold Irish Cream in our Irish Style coffee. The Bourbon adds a nice roundness to this classic coffee drink.

If I’m spiking my coffee, I’m probably mixing in Teeling Small Batch. It’s aged in rum barrels and is great in many applications, but is especially great in an Irish Coffee.