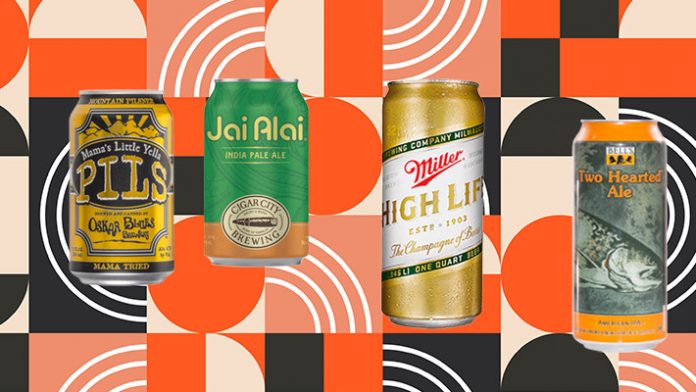 For years, if a beer was served in a can, it carried a certain feeling of… inadequacy. High-quality craft brews weren’t putting their hard work into aluminum cans. They were filling fancy-labeled bottles instead. Only low-brow, mass-produced fizzy, watery brews and seemingly ancient domestic brews were found in cans.

Oh, how things have changed. These days, you’ll find cheap classic dad beers side-by-side with trendy, barrel-aged beers on the shelves of your local grocer or beer shop. Cool labels, low-costs, award-winning brews — there’s no reason for breweries not to try cans out.

Natasha DeHart, founder and master blender at Bendt Distilling Company is Lewisville, Texas, loves beer in cans but keeps her selections in the Lone Star State. With one exception.

“We always try to drink the local beer, wherever we may be at that moment,” she says, “but our favorite nationally distributed beer would have to be from Colorado’s Avery Brewing Company. I haven’t had a beer made in that brewery that wasn’t absolutely solid.”

Many bartenders agree that craft canned beers are where it’s at, while others like to stick to the throwback classics. To get a few solid recommendations, we asked some of our favorite bartenders to tell us their go-to canned beers that are available almost anywhere.

Miller High Life. I know, it’s an unexciting choice, but I am a sucker for yellow beer. The Champagne of Beers can be the best and most refreshing beverage in the world if it is ice cold but can also be the worst if it is anything but that. Stay frosty, my friends.

Cigar City IPA is the number craft beer in the US for a reason. IT’s only shortcoming is that it’s an IPA and there are as many fans of the style as there are naysayers.

I feel like getting more nuanced here, but this is really where everyone just pops open a PBR and lounges back on the couch, right? It’s hard to get any better than that refreshing, classic beer.

Avery Brewing is where it’s at. Their Belgians are fantastic, IPAs are refreshing, and their barrel-aged series is boozy and in your face awesome. If we can’t find something local that grabs our attention, we gravitate to anything Avery. Especially Avery White Rascal.

Tough and touchy subject here. I’d have to say Guinness first and if that’s not available Bud Light. Both are light and refreshing in their own profiles (Stout & Lager). I will personally always love Guinness in all its forms due to a visit to their Dublin storehouse which gave me a love for the wonderful product; also it’s canned product pours perfectly into a pint. And if you can’t find it anywhere, there’s nothing like a perfectly refrigerated crisp Bud Light.

Oskar Blues Mama’s Little Yella Pils. This beer is perfect for any occasion and highly crushable. A light refreshing pilsner with plenty of flavor and tasty enough to please even the most particular craft beer nerds. It’s my old faithful, whenever I can’t decide on a beer I grab a six-pack and I’m always pleased with my choice.

Steigl Radler. Technically, it’s a malt beverage but you can still find it on the beer shelf in the grocery store, so I’ll call it a beer. I love drinking radlers in the summer because there are so many ways to drink it. My go-to is a shot of blanco tequila in a pint glass filled with ice and a radler on the side — basically just a paloma-ish boiler-maker. Or if I want to imbibe and hang for a few hours without catching a big buzz you can just drink the radlers sans tequila for a delightful, refreshing sessionable option.

Honestly, have to go with a classic here in Bell’s Two Hearted IPA. For as much beer as Bell’s makes, this beer never seems to disappoint in terms of consistency. It is one of the most archetypal examples of the American IPA out there.

The Tiny Juicy IPA from the folks at Five Boroughs takes the cake here. Contrary to popular belief, that fruity, hop-enriched flavor is perfect for all 365 days. Yes, you can drink it every day — it has fruits! That’s just being healthy.

Oskar Blues Dale’s Pale Ale Classic pale ale out of Colorado, its turn countless people on to craft beer. It’s very clean, but still full of character, and a genuine love letter to the style of the pale ale. Probably the first big craft beer to be sold in a can and helped bring canned beer some respectability.

Hands down, Bell’s Hop Slam is the best-canned beer available. I’m not a huge IPA guy, but that beer is so perfectly balanced and approachable for anyone looking to step their cooler game up.

This is an easy one for me, my favorite canned beer that is easily accessible nationwide is Sixpoint Sweet Action. It is fruitier and slightly sweeter than your typical pale ale that is enjoyable and delicious all year round. You will still get your fair share of hops while keeping its light to medium body. To quote Sixpoint themselves “What is a sweet action? Knowing isn’t everything sometimes. Sink one…your palate just gets it.

If I have to pick just one canned beer to drink, I’m going with Belching Beaver Peanut Butter Stout. It’s Reese’s heaven in a can.

I don’t drink beer all that much, but when I do, I usually go for a Coors Banquet. There are few beers as classic as The Banquet. Smooth, refreshing, and always there.

Sixpoint Bengali. I love, love this brewery in New York City. I fell in love with this brand, not only because of the people who work there, but the creaminess of this beer. I love its peachy aromas and full body. It’s amazing alone and plays nicely with charcuterie boards or spinach dip. Anything cheesy.