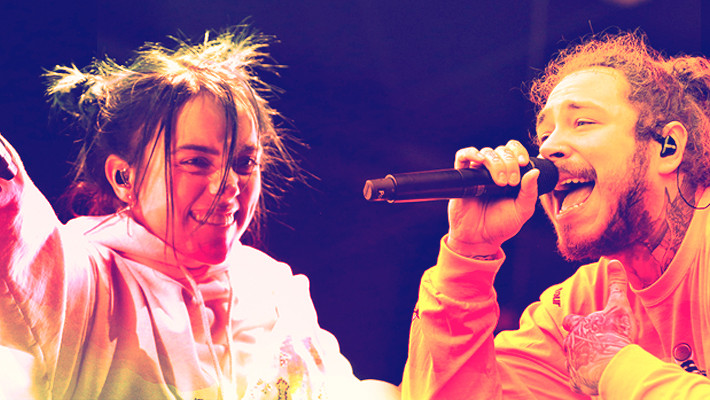 When Grammy nominations are revealed, people are eager to express their thoughts on who should and shouldn’t win. While writers are encouraged (and should) write with a rather authoritative tone, it’s important to remember that music writing is often — at least to an extent — just an outgrowth of personal or collective interests and tastes. You may have looked over the list of eight songs nominated for Record Of The Year and had specific opinions, but so did several other people. As a result, here’s me serving as “several other people,” making a case for and against every single nominee for that category. They’re all good. But they’re also all, well, not good.

Why it deserves to win: The serpentine bassline and playful synth melody find a delicate balance, their confluence capturing the spirit of adolescence: it’s mischievous but good-natured, posturing an adult sophistication it desires but resents in equal measure. Eilish is the youngest artist to be nominated for all four of the main categories in the same year, and it’s exciting that her song feels like youth.

Why it doesn’t deserve to win: Despite the conceit of its bifurcated song structure, the take-me-seriously second half sucks all the energy out of the song. Even more: “Bad Guy” does little to highlight some of the most invigorating production techniques that Finneas has ever offered up (“Bury A Friend,” “When I Was Older”) nor does it get at the sensitivity of Ellie’s intimate balladry.

Why it deserves to win: Darkchild still has it: His production here has a keen sense of accentuating HER.’s smoky but firm vocals. The guitar constantly strums, allowing a space for HER to express her anxieties about a relationship, and the rim clicks are as cutting as they are comforting. “Hard Place” aims to catalogue stream-of-consciousness, and the song’s looseness makes it easy to empathize with HER.

Why it doesn’t deserve to win: The existence of a “Single Version” points to its greatest flaw: “Hard Place” can often meander purposelessly when something more succinct would have sufficed. The sequences of “whoa’s” are an expected bit of shoehorned poignance.

Why it deserves to win: Justin Vernon’s greatest strength is his toplines, specifically his prioritization of phonology and feeling over lyrics that demand contemplation. It’s all evocation, and “Hey Ma” features an impressionistic landscape of vocal manipulations and synth pads and slinking drums to bolster his brand of introspective melancholy: one that doesn’t require the slightest of rumination yet is nevertheless deeply felt.

Why it doesn’t deserve to win: I’m loathe to offer such an argument but “Hey Ma” is an unwelcome reigning in of the production techniques that appeared on Bon Iver’s previous album 22, A Million. It doesn’t feel right for a song that feels like a watered-down take on previous songs to get an award. A more straightforward approach also only demystifies Vernon’s lyrics: “I was tokin’ on dope” doesn’t sound so interesting when so plainly presented.

Why it deserves to win: There’s something to be said for a song that was the musical event of the year for what felt like an entire year. There were discussions about genre and authenticity and history and racism and TikTok and memes and chart records and streaming and whatever else, but “Old Town Road” ultimately succeeded for constantly providing surprises, best of which was this remix with Billy Ray Cyrus. Unpredictability was always baked into its DNA — the reason it sounds like country, at least musically, was for its incorporation of a Nine Inch Nails sample — but Cyrus’s verse was clever in how it made clear the similarities beyond country and rap.

Why it doesn’t deserve to win: “Old Town Road” is a good song but it’s not a great one, at least without all the context surrounding it. Rooting for it felt more like rooting for Lil Nas X (or against country purists) than the song itself. Its simplicity is a blessing and a curse: it’s easy to sing along to and that grants it a ramshackle charm, but leaves the song feeling a bit empty, heightening the sense that this was mostly a joke when initially created. The original is also better: Lil Nas X should be singing the hook as much as possible, he’s more fun.

Why it deserves to win: The “My Favorite Things” interpolation is more interesting than people are willing to admit. Ariana Grande inverts the song completely: she refuses to admit sadness, and lists things that are quotidian to her (“red bottoms”), and not the average person (“raindrops on roses”). The song’s vacuousness is its greatest strength: If “Break Up With Your Girlfriend, I’m Bored” makes too obvious its sinister intent, then “7 Rings” never lets up. Its cryptic synths and use of negative space taunt the listener; songs this evil deserve recognition.

Why it doesn’t deserve to win: Grande’s not fit to fully sell the song’s conceit. She fumbles in her rapping, which in turn reveals the roteness of the song’s trap elements. At times, she feels less self-satisfied than despondent, but oftentimes she just seems bored. It’s only three minutes but “7 Rings” can sure feel tedious and lethargic.

Why it deserves to win: It’s a cute song, really, and its ebullience is undeniable. Or at least it seems that way on the surface — parents around the world seemed to be ok with their Into The Spider-Verse-loving kids singing “She wanna ride me like a cruise.” The real genius comes in how the song refuses to be anything but chipper. Post Malone and Swae Lee both take on a superhero role in a romantic relationship, and their crooning matches the production: they’re both imbued with melancholy and hopefulness, convincing listeners that certain lyrics (“You’ll be left in the dust, unless I stuck by ya”) are heartfelt.

Why it doesn’t deserve to win: The production lacks a much-needed verve that would elevate the song’s attempts at sweet talk. It aims to be chill, but the heavy reverb really just makes it congeal into a muddy goop.

Why it deserves to win: Khalid’s music is always best appreciated in passing, when listening is more passive than active. “Talk” is well-constructed for that setting: its hook is immediate and memorable, and Disclosure’s sparse production allows for it to be the only draw. There’s a brilliance to the song’s meandering rhythm and how it quietly climaxes with the titular line: “Can we just talk?” The tone and intent of such a question—cautious but casual—couldn’t have asked for more a befitting sound to accompany it.

Why it doesn’t deserve to win: A Socratic question: Do songs this unassuming deserve to win Record Of The Year? Perhaps. Still, one gets the sense that “Talk” would have been improved with more of its electronic filigrees to enliven the subtext.

Why it deserves to win: Carnivalesque piano and screeching strings are the exact elements needed to sell the snark and strut of “Truth Hurts.” Lizzo puts on a multitude of voices and serves plenty one-liners to remind the broken-hearted that kiss-offs should be empowering, yes, but also fun.

Why it doesn’t deserve to win: “Truth Hurts” exudes a theatrical energy that’s fun in small doses but not so much with repeat listening. Its popularity via TikTok makes sense: even if the song isn’t better in excerpted form than in full (it is), it doesn’t feel like more than the sum of its parts, and every line and vocal quirk can make everything feel procedural.