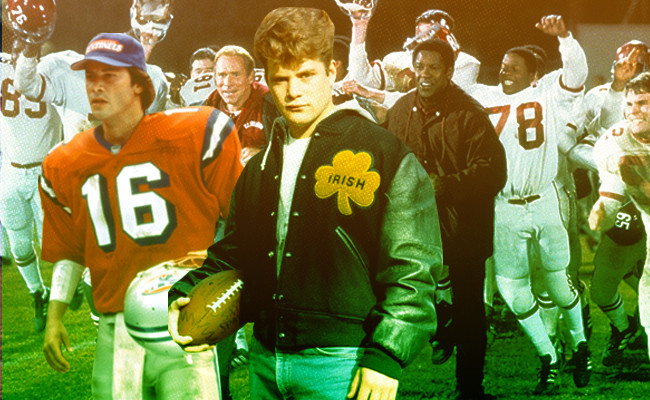 Football season is coming to a close, which means it’s the perfect time to watch football movies. At this point the sport has been optimized for TV, and networks know just how to keep viewers engaged in a game. But football movies are great because they take away the commercial breaks and fill that time between snaps with touching stories, inspiring speeches, emotional journeys as a team, and maybe some laughs and tacklin’ fuel.

From comedy classics to the stirring underdog stories people love about sports, these movies are the best of the best. As we get ready for Super Bowl 54, let’s take a look at our favorites.

I wouldn’t say this movie has aged great in a modern world where every hard impact in sports makes you wonder how dangerous it was for the players involved. Still, of all the Adam Sandler and Happy Madison sports movies, this is probably the best one not named Happy Gilmore. All of these titles follow the same basic pattern: Scrappy underdogs get to kiss girls and win despite being extremely unconventional and actually kind of bad.

The fun here is in the direct homages to real life. The movie has lots of cameos from NFL legends like former Giants linebacker Lawrence Taylor and former coaches Bill Cowher and Jimmie Johnson. Though he’s not a real coach, Henry Winkler does his best to nail his role as a slightly-damaged small-time coach who sees something in Bobby, Sandler’s character.

Cue the resounding cries of “THE BOOK WAS BETTER,” but the movie version of The Blind Side won an Oscar in its own right. Sandra Bullock’s role as football standout Michael Oher’s surrogate guardian won her an Academy Award for Best Actress in 2009. It also got a Best Picture nod. The story of an essentially homeless teen taken in by a wealthy Memphis family and turned into a top NFL Draft prospect is far more interesting in written form than it is emotional in the visual medium, but it is a touching tale that’s lovingly done here.

This is another story about a high school football team in an extremely competitive town. There are a few of those on the list, and it’s an underdog story, for sure, but Varsity Blues is also the showcase for the worst coach in the history of football movies. Jon Voight squaring off against James Van Der Beek as the fun backup quarterback who is ready to lead the team to glory has some truly strange moments, but it’s a fun football classic that deserves to be here. It’s about as 1999 as a film can get, if you catch my drift.

The show has perhaps superseded the 2004 film in pop culture relevance, but the movie more closely follows the book — a Buzz Bissinger classic — and is excellent in its own right. Billy Bob Thornton as a high school football coach works surprisingly well here, and it’s one of the more realistic reenactments of the intense and often overbearing world of Texas high school football.

Tim McGraw makes his second appearance on this list with a role here and, yes, Connie Britton is great as Sharon Gaines. She would make an excellent high football coach’s wife in a TV show by the same name, which started two years after this movie came out.

Every Notre Dame fan seems to love Rudy, the underdog story of an undersized wannabe football player who through hard work and dedication finally gets his chance to shine. Rudy is a classic football movie that’s beloved in many circles, and Sean Aston does great work here as the titular character, who is told he is too small to play college football.

Unfortunately, Rudy could not be ranked higher here because he was offside.

Denzel Washington knows how to take a Disney movie about racial harmony and make it into a powerhouse. The real story of coach Herman Boone may not be as cinematic as the one Washington portrays on screen, but this is an instantly quotable movie about a town coming together to, eventually, unite through football.

The movie also features some strong performances from actors who were up and coming at the time. Kate Bosworth, Ryan Gosling and Hayden Panettiere all have roles as young performers here, and it’s one of the best-rated movies on IMDb of the bunch here.

Brian’s Song is based on the real life story of Gail Sayers and Brian Piccolo, who played for the Chicago Bears. Before there was Walter Payton, there was Gail Sayers at tailback for the Bears. Piccolo’s illness and eventual death are the backdrop for this story of friendship, and James Caan and Billy Dee Williams make the most of this made for TV movie. It may be a bit hard to track down, but it’s definitely worth watching. A nice companion piece to this movie, by the way, is Sayers’ biography I Am Third, which touches on Piccolo but also describes his journey to the NFL, which is also fascinating.

With all respect due to Major League, The Replacements is the best bad sports movie of all time. This is Keanu Reeves as washed up quarterback Shane Falco, who scrapes barnacles off the side of boats near the stadium in Washington. Falco is suddenly thrust back into the football world by over-the-hill coach Gene Hackman because of a labor strike. Never before have you been so firmly on the side of workers than in this movie that’s basically about strike-breakers crossing picket lines to get a second chance at football careers.

If that concept sounds insane, well, it is. The movie is wildly unrealistic, full of unnecessary shenanigans, and probably doesn’t hold up all these years later. But it’s also so weird and odd that it has some immensely memorable lines. I’ll never forget Gene Hackman’s Jimmy McGinty asking Clifford Franklin (Orlando Jones) to apply Stick ‘Um. After watching this you’ll occasionally ask a friend “What are they going to do, throw me in Football Jail?” And you’ll definitely ask if they remember how bad Shane Falco was at the Sugar Bowl that one year. Promise.

A lot of the hype for this movie is lost in the 90s and two big, memorable lines from the film. But “Show me the money” and “You had me at hello” are not all that’s there for this romantic dramedy. This is Tom Cruise at the height of his Hollywood powers, as it was released in the same year as Mission: Impossible. He has some pretty hilarious and dramatic moments in this one.

But the movie is more than just Cruise’s titular character navigating the world as a sports agent. Cuba Gooding Jr. won an Oscar for his Rod Tidwell, and he’s a surprisingly believable wide receiver for the Arizona Cardinals. Tidwell’s wife, played by Regina King, steals just about every scene that she’s in here. And Renée Zellweger is strong as well. The best line of the movie, however, comes from a young Jonathan Lipnicki. That’s the one I quote the most, at least.

What’s remarkable about Any Given Sunday is that, two decades later, much of the subject material explored here still holds up. Oliver Stone’s look at the brutal world of professional football isn’t perfect, but no sports movie is. What Any Given Sunday captures here so well are the emotions of the game and some of the problems that plague the sport. Injuries, drugs, interpersonal drama, team relocation — all of that gets explored in the nearly-three-hour movie. Any Given Sunday isn’t nearly as well-held as some other sports movies, but as a Football Movie it’s hard to think of a better film to give that title.

Besides, this is the greatest football speech ever given.

I don’t know what else to say.