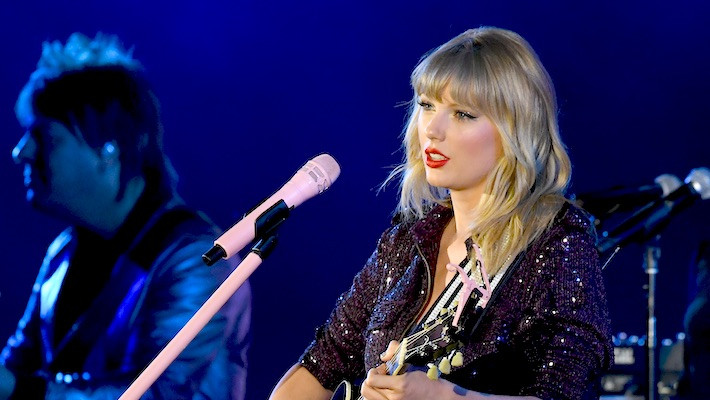 The Grammys take place Sunday, meaning it’s time for artists to begin practicing their acceptance speeches. And though they may not win, those performing at the Grammys are warming up for a high-pressure live set. The Recording Academy released the full list of artists performing, but there may have been one more surprise that now apparently won’t happen at all.

Taylor Swift was purportedly booked to make an unannounced performance at the awards ceremony. But because allegations of sexism surrounding Recording Academy have surfaced, there is speculation the allegations caused the pop star to back out of making an appearance altogether. While most of the musicians performing at the ceremony Sunday have been confirmed, there was one “TBA” placed on the schedule.

Sources told Variety that Swift was Grammy executives’ top choice to play, but was never “formally confirmed.” But the singer took herself out of the running due to recent allegations of sexism within the Recording Academy.

This past week, Deborah Dugan, former president and chief executive of the Recording Academy, was placed on administrative leave following accusations of misconduct. The Academy board of trustees cited an allegation from “a senior female member of the Recording Academy team” as the reason for placing Dugan on leave, according to a report from the New Yorker.

Dugan, however, has since shared her side of the story. Weeks before her removal, she shared a memo with the Academy’s HR department, stating “something was seriously amiss at the Academy.” The memo described conflicts of interest amongst the Academy’s voting members, voting irregularities, and financial mismanagement. The Dugan’s memo also called the Academy a “boy’s club.” After news of Dugan’s memo broke, four women with high-ranking positions disagreed with the label, sending an e-mail staff members. “We would not have taken precious time away from our families and careers if we felt that it was a ‘boys’ club,’” they wrote.

Dugan responded by filing a 44-page complaint with the Equal Employment Opportunity Commission in LA accusing the Academy of discrimination. The complaint said Academy CEO Neil Portnow, who last year told journalists that female musicians must “step up” in order to receive an award, has been accused of sexual assault. Dugan herself reported that she faced sexual harassment from Academy attorney Joel Katz. Dugan also revealed that one of the 2019 Song of the Year nominees had actually sat on the nominating committee, thereby skewing the results.

While none of Dugan’s complaints have been confirmed, Taylor Swift, who has allegedly faced harassment herself, is sitting out of the Grammys Award ceremony.

Watch The Grammys this Sunday, January 26 at 8 PM EST.