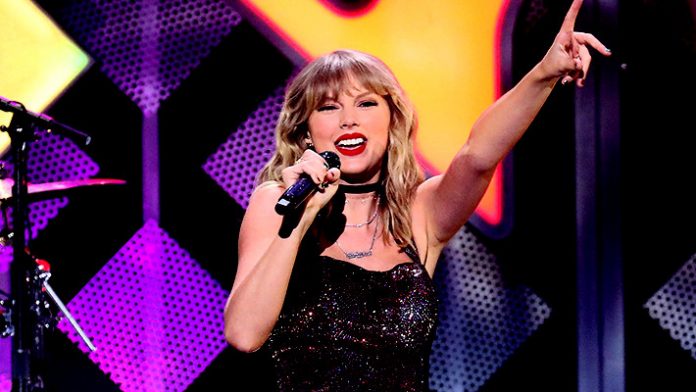 In an era where the racial and economic equality of America was coming to the surface of mainstream pop culture with renewed importance, a country star named Taylor Swift was quietly, steadily building an empire. Propelled by creative genius, blonde curls, and an insatiable need to please, this fiercely intelligent songwriter began to rack up accolade after accolade, a cycle of success that left her eager to earn more approval from her fans, her country, and her industry. So go the opening scenes of Miss Americana, a documentary about Taylor Swift’s life as a whole that premiered at Sundance last week, and represents the most intimate look at her inner world that the singer/songwriter has granted any journalist, to date.

For most pop stars, the point is not to be perfect, the point is to be themselves. Or so they say, while perfectly walking the line between palatable and appealing. Taylor Swift is no different, but few pop stars have faced a breaking point as markedly as she did, inadvertently squaring up with a man who was, at one point, considered by many to be the most important figure in hip-hop history. When this ongoing feud became a flashpoint for a conversation about race, privilege, victimhood, and celebrity in America, the burden of such historical, explosive anger was, of course, way too much for one woman’s shoulders to bear. This breaking point is exactly where the Lana Wilson-directed film begins to pick up the thread.

Following Taylor through the aftermath of her fall from grace, through the campy, resentful spectacle of her dark-pop rebuttal, Reputation, and hinting at the love growing between her and her current partner, actor Joe Alwyn, Miss Americana is not just an astute retelling of Taylor’s past, but a subtle recounting of her first real stab at making decisions because she wanted them. Within this reframe, her days spent in the studio reconstructing “Me!” from a somber, confident piano ballad into the confetti-pop blast-off lead single it became aren’t just a reflection of an artist doing her work, but of a person asserting her worth. Lover isn’t a comeback album, or a pop shift, or a response to any traumatic situation, it’s simply Taylor, herself.

In that light, the fact that the “Me!” flopped isn’t a bad omen, but a likely one — people have been fed a persona, not a person. They want the drama, not musical theatre; cliffhangers, not happy endings. But drama is the stuff of a toxic approval cycle that Taylor has, thankfully and finally, excluded from her own narrative. Enmeshed, arguably for the first time, in a loving, healthy and long-term romantic relationship, and facing down even bigger demons, like the cancer that has plagued her doting mother, Andrea Swift, on and off for several years, Swift has simply outgrown the reactionary and obsessive behavior of eras past. When she went offline and off the grid for a year or more, it wasn’t just in hiding, but in pursuit of happiness.

As much as her fans may relate to the emotional response some of the more challenging circumstances of her past have elicited, hopefully, a good amount of them will also relate to the self-excavation she has done to arrive at a more serene and selfless place. Part of that, of course, means education. And though she’s never explicitly called it out, the shifts that Swift has adopted in pursuit of a more emotionally healthy relationship with herself and her loved ones, and the language she uses to describe her changing perspective, all point to the theory that part of her time away was spent in therapy.

Therapy gets thrown around a lot as a catchall word to cope with emotional trauma or negative patterns, but at the end of the day, the gist of the process is relearning how to care for ourselves and be more loving to others. So whatever process Swift may or may not have pursued that empowered her to engage in both of those behaviors to a greater degree, and stop engaging in say, eating disorder tactics, kudos to her for wanting to change her actions, and following through. Even if that follow through, as heard on “Me!” didn’t land like she might’ve hoped it would. At least not yet.

Similarly, the initial suspicion that her newest album’s second single, “You Need To Calm Down,” was met with arose from the fact that Taylor has never once spoken on political subjects like gay rights in her songwriting, not from a belief that she doesn’t actually support it. What Lover represented, Miss Americana tells us, is Taylor being her most authentic self. Her long-held personal beliefs, which, the documentary shows, she was routinely advised by her closest industry advisors to keep closeted, have finally been thrust to the surface.

The film catalogs her decision to countersue in a sexual assault claim that cost the assailant his job — so he then sued Swift for damages. When she, in turn, countersued for one dollar, and won, the experience taught her not just about the inhumane treatment women face from the American justice system when they stand up against violations of their own bodies, but how awful it feels not to be believed. Miss Americana shows her breaking her political silence for the first time ever, and spurring over 50,000 young people to register to vote, even if her co-sign didn’t lead to a victory for her candidate of choice. It shows her devastated face in the car, at the loss, while news outlets mocked her for trying — the same way they once mocked her for staying silent.

Most of all, it shows a woman who has come to understand the context of her own position in the music industry and the world, doing everything in her power to use her privilege appropriately, and with grace. And for those who are keeping track of the karmic scales, it’s no real surprise that Taylor’s commitment to reinvention — not for the sake of career success, but for her own mental and physical health — comes alongside a massive fall from grace for her one-time rival. Revenge is a dish best served cold, but these days Taylor’s world is so warm and sweet, she forgot that it existed.

Miss Americana is now available to watch on Netflix.