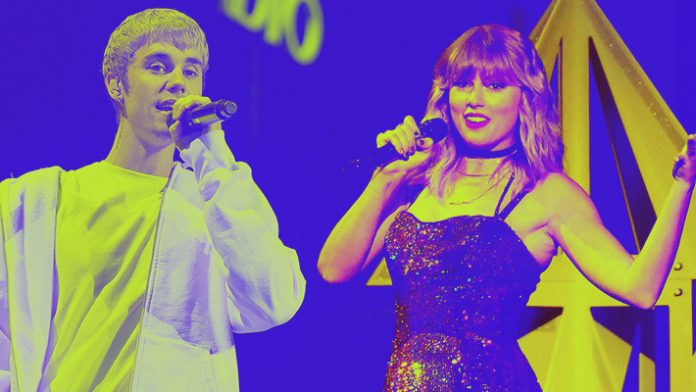 If Shakira and J. Lo’s fiery Super Bowl 54 performance proved one thing this week, it’s that pop stars are some of the hardest working artists in the industry. Especially with musicians like FKA Twigs and J. Lo proving pop performances don’t need to be all about singing. A truly captivating show can see artists demonstrating some impressive, gravity-defying feats — particularly on a pole. This week in pop music was a showcase of this hard-working industry. Taylor Swift debuted a song featured in her new documentary, Justin Beiber put forth the second single from his upcoming comeback record, and Dua Lipa continues to pull inspiration from ’80s pop nostalgia in her latest track.

Each week, Uproxx rounds up the best new releases. Listen up.

Taylor Swift — “Only The Young”

Taylor Swift’s documentary Miss Americana focused on her life in the spotlight and her struggles with worldwide fame. The documentary also gave a preview of a new song, which the pop icon released Friday. “Only The Young” is one of Swift’s more political songs, which she had been warned against making by her former record label executives. While the track was written in a despondent headspace after a disappointing midterm election, the track’s message is hopeful.

Justin Bieber — “Get Me” Feat. Kehlani

Justin Beiber announced his comeback record Changes will arrive on Valentine’s Day. But before the album’s release, the pop singer gave fans another taste of the project with “Get Me.” Featuring Kehlani, the track’s jarring downbeat rides under Bieber’s sensual lyricism. Kehlani’s verse arrives and the singer breathes new energy into the track with her soaring vocals and smooth delivery.

Kesha debuted her hotly-anticipated record High Road, and with it arrived an eclectic mix of matured songwriting. High Road is Kesha’s most personal record yet, and the intimate themes are exemplified in “Little Bit Of Love.” The track’s upbeat piano chords lead into a heavy-hitting and expansive chorus that opens a space for Kesha to reveal her true feelings.

Dua Lipa is preparing for the release of her upcoming record Future Nostalgia. The singer continues her ’80’s pop nostalgia with her latest single “Physical.” Seemingly pulling instrumental influence from Oliva Newton-John’s hit, “Physical” marks a punchy and energetic effort from the singer.

Allie X’s record Cape God arrives at the end of February, but the singer continues to give her fans a taste of the upcoming project with “Devil I Know.” “The lyrics to ‘Devil I Know’ follow my inner dialogue as I address my abuser directly,” Allie explained in a statement. “What the listener realizes as the song goes on, is that I am actually singing to myself as the perpetrator, inflicting all my own suffering.” The song’s instrumentals reflect the lyric’s dark theme with Allie’s echoing vocals layer over a poignant and immersive bassline.

Sofia Reyes shared the empowering track “Brave” this week, an original song written for the Freeform series The Bold Type. Reyes herself makes an appearance in the fourth season of the show, debuting “Brave” as the first song she wrote about falling in love with a woman.

San Holo teamed up with Broods for a shimmering new single. The production crafts the song into a vastly open landscape, with Brood’s feathery vocals softly echoing throughout each line. “‘Honest’ is a song I wrote a few years back about being honest in every aspect of your life,” San Holo said in a statement. “It delves into the idea of being as genuine as possible when you meet someone, even if nothing comes of it. I would rather be transparent from the start than create a false sense of who I am or what I expect.”

Porter Robinson — “Get Your Wish”

From his forthcoming album Nurture, Porter Robinson‘s “Get Your Wish” features the musician’s signature off-kilter samples mixed into an energetic dance-ready anthem. Robinson drew inspiration for the track from their career, saying “Get Your Wish” is “a song about finding a reason to keep going, even if it’s not for your own sake.”

Louis Tomlinson’s debut solo record Walls arrived Friday and fans were finally able to hear the entirety of his pivot to ’90s Britpop-inspired tunes. But “Too Young” is a stand-out on Walls. Gentle strumming slowly guides the track forward, with Tomlinson’s warm vocal delivery at the track’s center point.

Sofi Tukker’s dreamy single “Ringless” showcases the singer’s emotive vocal delivery over her signature electric beats. Tukker crafts a certain sense of anticipation in the track by stalling the beat slightly at the chorus. While the instrumentals create lucidity, Tukker’s song pulls inspiration from “musing on a relationship doomed from the start.”