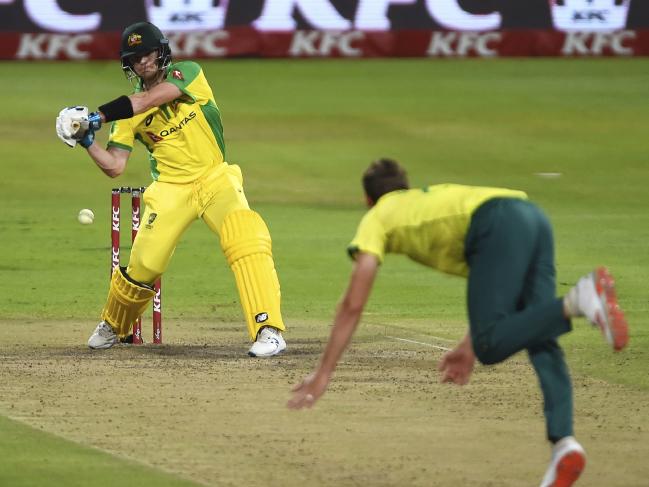 The chief cricket correspondent of England’s Independent newspaper, Stuart Hess, took a shot at Steve Smith after the wheels started to wobble on Australia’s innings in its winner-takes-all T20 against South Africa overnight.

Smith had already been lucky to survive being bowled off a no-ball and had scored just 10 runs from nine balls entering the final over as an incredible platform laid by openers David Warner (57 from 37) and Aaron Finch (55 from 37) looked like being somewhat wasted.

“The Proteas can thank their lucky stars Australia decided to send Smith in at 5,” Hess tweeted, perhaps believing Alex Carey was the better option.

But Smith, who only a few hours earlier had regained top spot in the Test batting rankings from Virat Kohli, was determined to make his mark on his return to the Newlands Cricket Ground in Cape Town where his career famously fell apart almost two years ago.

Proteas paceman Anrich Nortje accommodated him with a near half-volley outside off with the first ball of the 20th over and Smith sent it back over the long-on boundary for six.

He hit back- to-back twos before sending the fourth ball over the extra cover rope for another six with an inside-out cover drive.

Four more from the final two deliveries gave Smith 20 runs for the over as he finished on 30 from 15 balls and Australia set an imposing score of 5/193.

It appeared more than enough when Mitchell Starc (3/22) knocked off dangerman Quinton de Kock’s pegs with the fourth ball of the innings.

There was a brief period of hope for the home side as Heinrich Klaasen (22) and Rassie van der Dussen (24) combined to push the score to 2/57 early in the seventh over.

But from there South Africa completely collapsed as Aussie spinners Ashton Agar (3/16 from four overs) and Adam Zampa (2/10 from three) ran riot to knock them over for 96 and surely leave de Kock regretting a decision to put Australia in.

The visitors largely dominated the series, taking the first match by a similar margin (6/196 to 89) before letting a winning position slip in the second match (4/158 to 6/146).

A three-match one-day series begins this Saturday at 10pm AEDT.