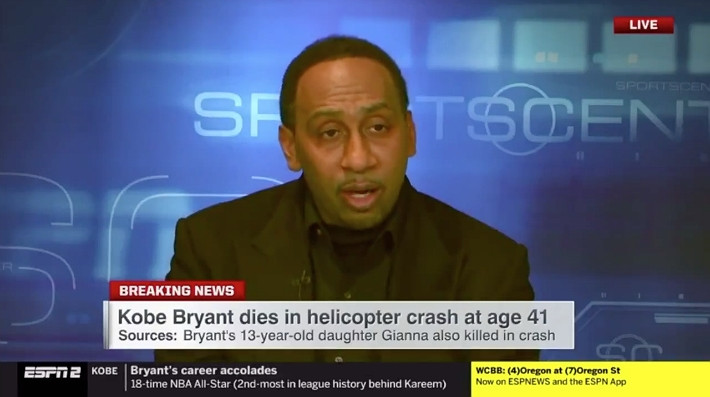 ESPN’s Stephen A. Smith was one of many ESPN personalities and reporters asked to comment on the tragic death of Kobe Bryant on Sunday as the news rocked the sports world. And while there were no tears in his time on TV, he gave a touching tribute to the legacy Bryant left both on and off the court.

Smith was on ESPN just hours after news broke that Bryant had died in a helicopter crash north of Los Angeles. The accident cut his life short at age 41 and also took his 13-year-old daughter, Gianna. Smith’s message spanned the broad range of talents and interests Bryant had both on and off the court and served as a tribute to the life he brought to everything he did.

“Because coming into the NBA, one of the things that had turned others off about him, initially, he came into the league talking about how he was going to be as great, if not greater, than Michael Jordan one day,” Smith said. “And people used to look at him and say ‘This dude is off of his rocker, his chest is sticking out a little bit too much. He needs perspective.’”

Smith continued to praise that work ethic and what it meant in a league where his competitiveness was unmatched.

“Sure enough when you watched him work and saw the commitment he put in, you knew he wasn’t playing. He would win championships, take a week or two off and show up a week or two later and start working. In the summertime. At 5:30 in the morning,” Smith said. “This is what he did. Religiously. When other people were talking vacations, he was studying. When other people were talking breaks, he was working out. That was his entire mentality about anything and everything.”

It was an emotional tribute from a clearly-shaken Smith on a day where the tragic news rocked the world in a way that echoed much larger than basketball, a sport where Bryant’s drive and dedication was best put on display.