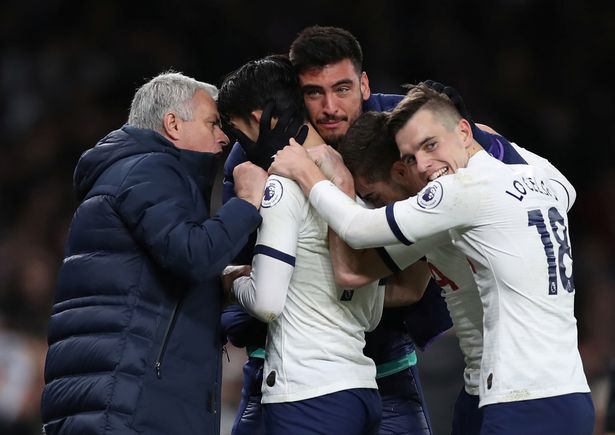 Suddenly they are back in top-four business.

With Chelsea faltering and this, the first landmark win of Jose Mourinho’s tenure, Spurs look well-placed to take the race for that final Champions League slot to the wire.

An eleven point gap when Mourinho was appointed in November has been reduced to just four. The clean sheet here was only their second in their last 13 games in all competitions.

But the Spurs plan is starting – finally – to come together.

Both Mourinho and chairman Daniel Levy could have panicked on Friday night and joined Manchester United in bringing in somebody – anybody – to boost their numbers up front with Harry Kane out until at least April.

But Spurs fans will remember Frazier Campbell on September 1, 2008. They’ve been there before.

They’ll settle this time around for Steven Bergwijn whose delicious volley to set up this win summed up the reason why Spurs brought him in from PSV last week for £25.4million.

He is now, already, a hero in north London. So much so that Kane’s absence no longer matters a lick when Spurs play Manchester City.

The north Londoners have beaten Pep Guardiola’s side three times since the City boss referred to them as ‘the Harry Kane team’.

This was another of those days on which the Spaniard was left eating his words.