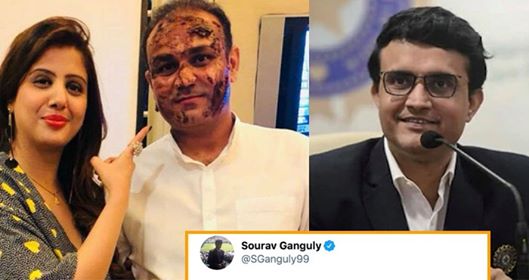 Virender Sehwag is very active on social media, especially on the micro-blogging site Twitter where he never fails to entertain everyone with his funny gimmicks and hilarious sense of humor. However, besides his humorous tweets and posts, he also shares pictures and videos of him and his family.

The picture was soon flooded with amazing reactions from fans, who just can’t stop gushing about how adorable the couple looked together. The President of BCCI and former cricketer, Sourav Ganguly, who shares a great bond with Virender Sehwag also reacted to his picture.

Talking about the couple, Virender Sehwag was only 21-years-old when he tied the knots with his childhood friend Arti. It is said that the marriage took place after a lot of opposition from their families. Aarti Ahlawat- Virender Sehwag’s marriage was set for 22nd April 2004, which was 4 days after his acclaimed triple century that he scored during India’s tour to Pakistan.

Earlier in an interview, Virender Sehwag talked about his love story and wife Arti Singh. He had said:

“I found Aarti very simple and she understands everything. I am very happy that I have married the woman I love”