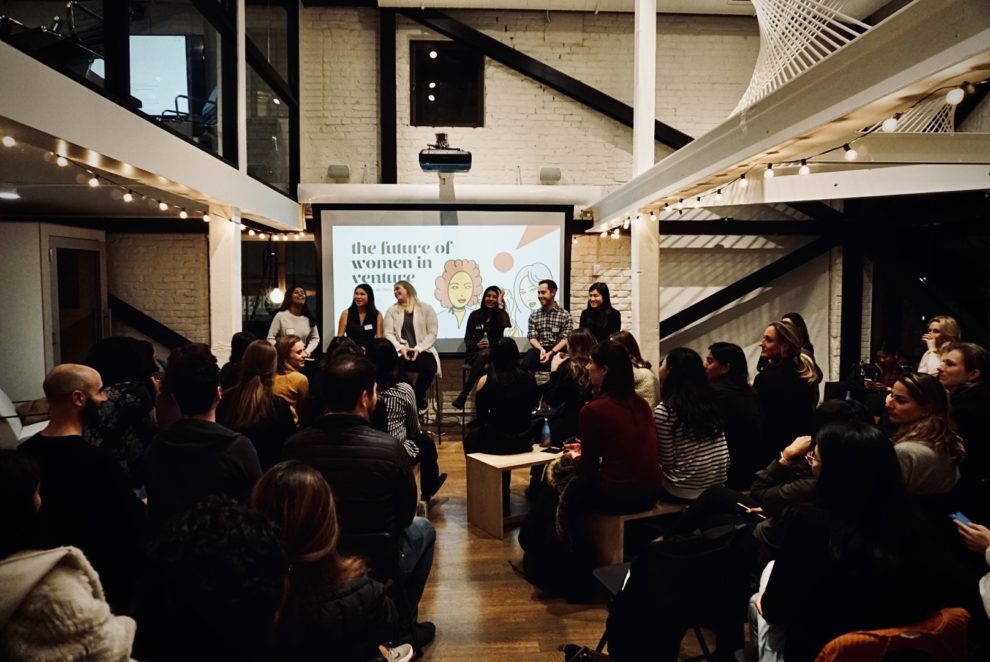 For one year, Chloe Alpert had a good reason to spend a lot of time (and money) at coffee shops.

The chief executive of Medinas Health spent the better part of a year at a coffee shop every Sunday from noon to 6 p.m. (with dinner afterward) to host what she called “Good People Weekends.” The idea was that she’d invite people, both random and not-so-random, to come chat and grab a cup of joe. Some days people wouldn’t show up. Some days people would. Alpert found comfort, laughter, and eventually her co-founders for her healthcare equipment startup from this ritual.

Alpert shared this story during a panel I hosted last night on behalf of Boss Women Collective, an organization focused on empowering women early in their careers. The theme of the rainy Tuesday night was the future of women in venture, and before you eye-roll at yet another diversity panel, the conversation was about more than just gender. Because diversity doesn’t start, and definitely doesn’t stop, at gender. I moderated the conversation, hosted by BWC founder Riana Singh, and we heard from Medinas’ Alpert as well as a crop of investors:

I thought I’d roll some of the broad takeaways from the conversation into a post for those that couldn’t get into the sold-out event.

To find a good mentor, you have to be a good mentee. If you’re struggling to find a mentor at work, Alpert said, the first step is to be a good mentee. The people we demand time from, the best mentors of them all, are busy people who don’t have time to go out of their way. You have to be willing to learn, make yourself available and most of all raise your hand. I thought this point was particularly relevant for those who are underrepresented in their industries. If you’re the only woman on your team, for example, you might have to look to another team for someone to guide you. Or you might have to change your perception on what a perfect mentor looks like for you, and take that as a lesson, too. One of the best editors I’ve ever worked with is a white dude. He taught me empathy, vulnerability and the craftiness needed to write bigger-than-life feature stories.

To really leverage a network, you have to be the best at something. Even if that is Craigslist advertisements. When Amy Sun was an entry-level marketing coordinator for Uber, she was given the job of posting on Craigslist to recruit drivers to work for the then-small slightly known ride-hailing platform. As Sun discussed last night, she took the opportunity as a challenge to be the best at the job. Sun said this was the way her name became top of mind when others in growth or product were thinking of people to hire or promote. For people not traditionally embedded in the venture and tech community, the best way to stand out is to be known for being the best at something.

It’s 2020. Ask people for proof they’re serious about diversity. As Jordan Segall told the crowd, if you’re about to take money from an investor you need to do two things: first, ask for reference checks (and actually check), and second, ask the venture capitalists for examples of investing in female-founded companies or working with female partners. If the VC stutters, you know they aren’t serious about diversity. Another point came from Alpert, who said that before she accepts money she asks the investor who they admire. The answer is pretty telling. Here’s to due diligence from both sides of the table.

Diversity of thought is important, too. As I teased earlier, we talked about how diversity moves truly beyond gender. Maitree Mervana, the newest member of Acrew Capital, explained how her firm is 50/50 on gender and hires across generations. That moves into pitch meetings for Acrew as well: Mervana shared how they often let junior associates speak first to help shake up the diversity of thought.

Tech careers do not stick to ladders. A common phrase throughout the night was “I never thought I’d be where I am right now.” Alpert went to art school, Mervana spent time working in investment banking and Sun was on the project management side until Sequoia cold-emailed her. All the panelists pushed the attendees to think of their career beyond traditional routes and be open to unique opportunities. Whitnie Low, the vice president of talent and community at First Round Capital, pointed to her role as a creative way to be in venture beyond the investment side. She spends her days working with founders, helping with post-investment resources and creating a community for First Round portfolio companies.

And those are just a few of the takeaways from last night’s panel. Thanks to everyone who attended. I’m all ears for the types of panels you want to attend so we can continue to scratch beneath the surface of this important topic.

The piece Some Concrete Takeaways From (Another) Panel On Diversity by Natasha Mascarenhas first appeared on Crunchbase News.