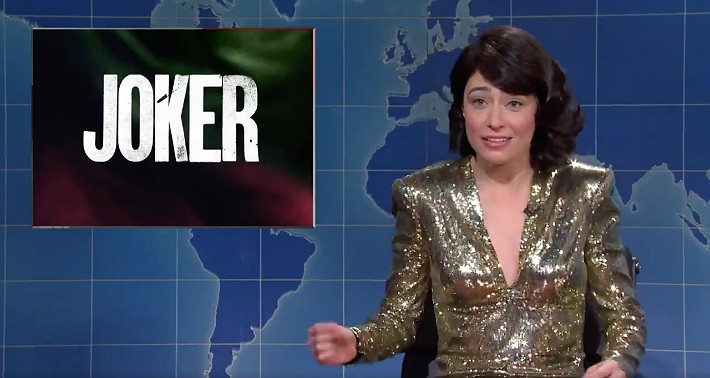 It’s officially award season, and the announcement of Oscar nominees has at least one SNL cast member finding a connection between many of the movies that got nods this year. Melissa Villaseñor appeared on SNL’s Weekend Update to sing songs about some of the Oscar nominated films that all have a strangely familiar theme. The segment starts with Joker, a controversial film in its own right, and quickly picks up a familiar theme: white male rage.

“Joaquin Phoenix skinny skinny, dances a lot but still so scary, dances on steps go stompy stompy, puts a pillow over crazy mommy. But the thing that this movie is really about is white male rage,” Villaseñor sings. Colin Jost noted that the song wasn’t in Joker, and when asked whether he liked the song made a point we’re all thinking.

“Well I’m no music critic but it seemed like it was just a description of the movie and then it took a weird turn into social commentary,” Jost said.

The songs continue, with the same music playing underneath as she then tackles The Irishman. “White male rage” was the chorus once again, which presented an issue when it came to the subject of Little Women.

Oh, wait. That one was widely considered an Oscar snub, probably because of white male rage according to Villaseñor. There was also a significant portion of the medley spent discussing the anger-filled relationship of Buzz and Woody from Toy Story.

One fun part of the sketch is that it seems like writers slipped some jokes past Colin Jost that he wasn’t aware of, as he talks at his own expense about how he spent Christmas alone and how he watches Joker “every day while I work out.” He seemed taken aback by them, but it did add to the fun here.