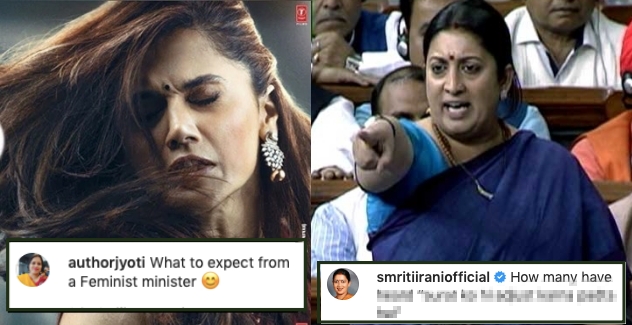 Taapsee Pannu’s Thappad is one of the most anticipated films of the year. The trailer of the film  not just sent a wave across the nation but also marked the beginning of a detailed conversation that slapping a woman isn’t itni si baat.

The trailer, while shaking the foundations of male chauvinist films, brought to fore the topic of domestic violence and unequal treatment towards women in the country.

Now, as Thappad is a few weeks away from its theatrical release, the Anubhav Sinha directorial has found yet another supporter in the Union Minister of India Smriti Irani. The actress-turned politician gave a big shout-out to Thappad on her social media platforms.

Smriti, in an Instagram post, shared the trailer of Thappad and penned a long note, extending support to the though-provoking multi-tale film. She mentioned that she will definitely watch it and urged others to do so.

“How many have heard “aurat ko hi adjust karna padta hai“
How many think “ki maar pitai sirf gareeb auraton ke hi pati karte hai”
How many believe “ki educated aadmi kabhi haath nahi uthata”
How many tell their girls their daughter in laws“ koi baat nahi beta aisa to humare saath bhi hua lekin dekho aaj kitne khush hai“
I might not support the political ideology of the director or may disagree with some actors on some issues but this is a story that I will definitely watch and hope people watch it with their families. It’s not ok to hit a woman … not even a slap … not even JUST one slap”