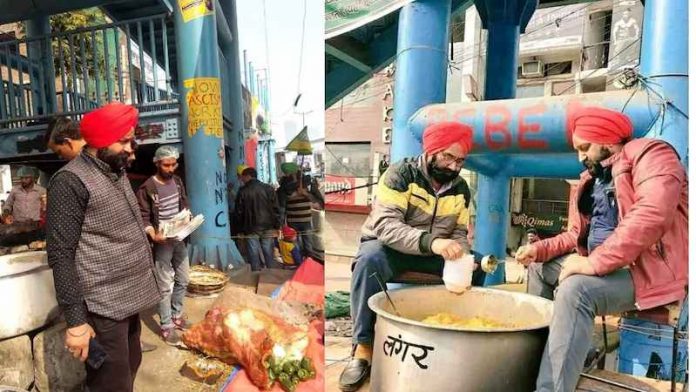 This man is ADVOCATE DS BINDRA . He sold his flat to arrange Langer at #Shaheenbagh . No words to praise your effort SIR. Massive respect for you.. ????????#ShaheenBaghProtest #shaheenbaghlanger #sikhbrothers pic.twitter.com/fFFhF46HGU

A video was making rounds where DS Bindra claims that he sold one of his three flats in Delhi to fund the langar at Shaheen Bagh.

In the video he claims that he is ready to sell off his other two flats too if needed to ‘fund the langar’ at Shaheen Bagh. This was later on picked up by mainstream media. India Today group’s Lallantop also published an article hailing Bindra.

The same claims were picked up and published by India Today Group’s Aaj Tak as well. As per media reports, Bindra had also been instrumental in leading anti-CAA protests at Delhi’s Mustafabad and Khureji. Mustafabad is the same place where eminent lawyer Bhanu Pratap Singh called for economic jihad targeting specific brands.

However, Aaj Tak and Lallantop, both, conveniently forget to mention that Bindra is an office bearer of Asaduddin Owaisi’s All India Majlis-e-Ittehad-ul-Muslimeen (AIMIM).

As per his Facebook page, he is also treasurer at AIMIM.

Another post on his Facebook page has Bindra posing with Owaisi where he is appealing to youth to join AIMIM.

Shaheen Bagh anti-CAA protests have been largely portrayed as ‘organic’ and ‘apolitical’ protest. However, with such politicians supporting and financing the protests, it raises a few questions. Moreover, these ‘protests’ have come under fire as two of the infants who were used in the protests by their parents have now lost their lives. Taking suo moto cognisance of their deaths, the Supreme Court will hear a plea to stop involvement of children in protests.

This is not the first time media has skipped mentioning political affiliations of ‘do-gooders’ glorifying the ‘good samaritan’ in its reports. During the JNU violence where leftist goons assaulted students who were registering for winter semester, the media would regularly take news bytes of one ‘Dr Harjit Bhatti‘. Dr Bhatti was touted as a representative of AIIMS. It was, however, revealed that Dr Harjit Singh Bhatti is not a doctor at the AIIMS. His Twitter profile says he was president of the Resident Doctors’ Association at AIIMS but does not inform about his current medical practice. Moreover, he is the National Convenor of the All India Medical Cell of the Congress party. In February last year, he was appointed to the post in the Congress party. Not just the Congress party, he is also close with the Bhim Army.