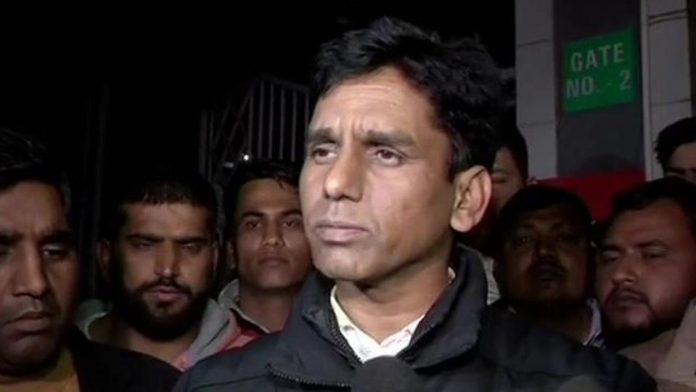 Hours after winning the Delhi Assembly elections, the Aam Aadmi Party (AAP) claimed that unidentified men on Tuesday night opened fire on the convoy of its MLA-elect Naresh Yadav and volunteers while they were returning from a temple visit.

According to the reports, at least one volunteer Ashok Mann died due to bullet injuries and one has been injured, AAP tweeted on Wednesday.

Shots fired at AAP MLA@MLA_NareshYadav
and the volunteers accompanying him while they were on way back from temple.

At least one volunteer has passed away due to bullet wounds. Another is injured.

Reportedly, the attackers opened fire at Naresh Yadav’s convoy while it was passing through Kishangarh area. Seven rounds were fired at the Mehrauli MLA-elect convoy.

Naresh Yadav, who was accompanied by volunteers, was returning from a temple visit from Mehrauli late last night when the incident happened. Naresh Yadav had won from Mehrauli assembly seat.

“The convoy of Yadav was attacked. Unidentified men opened fire at the convoy when Yadav was returning from the temple after results. A party volunteer Ashok has been killed,” senior AAP leader Sanjay Singh said. Singh has slammed Delhi police and has called this attack the murder of law and order situation in Delhi.

The incident reportedly happened near Fortis Hospital. AAP spokesperson Ankit Lal has stated that miscreants from 1 car had fired shots and police was present in the area.

The Delhi Police on Wednesday registered an FIR in connection with the firing incident. Delhi Police said that investigation is on and working on all angles to find out the motive behind firing the shots at Naresh Yadav’s convoy.

As per latest reports, Delhi police has stated that Yadav was not the target of the shooter and the killer had come to specifically kill the man (AAP volunteer Ashok Mann).

The AAP won in 62 constituencies with a voting percentage of 53.57, while the BJP got eight seats with a vote share of 38.51 per cent. The Congress drew a blank for the second successive assembly elections in Delhi.