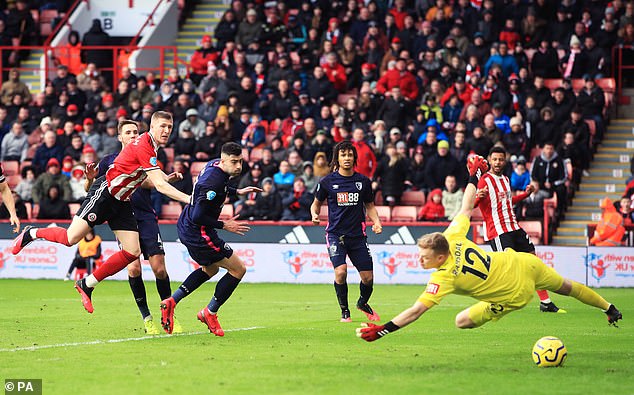 Not even Storm Ciara can blow Sheffield United’s European charge off course.

While Manchester City’s clash against West Ham fell foul to the weather, it was always going to take more than a bit of wind and rain to stop these Blades against Bournemouth.

And though Callum Wilson’s early opening goal for the Cherries issued a red alert for the home side, Billy Sharp and substitute John Lundstram hit back to steer Chris Wilder’s side up to fifth. 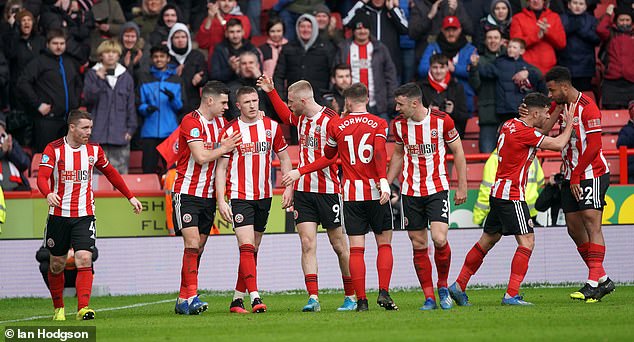 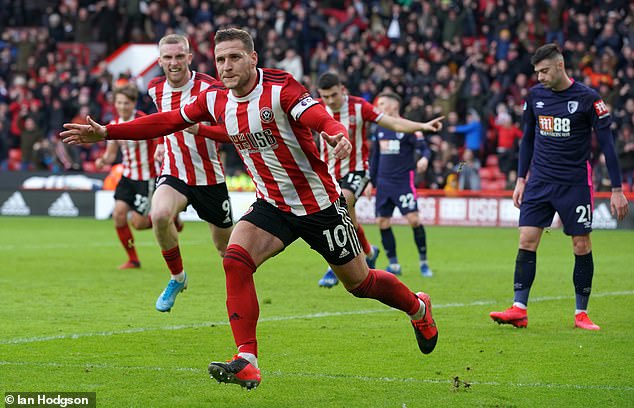 It was only last week that Blades boss Wilder finally admitted Europe was in his side’s sights. Well, he could hardly continue denying it given their lofty Premier League position with less than a third of the season still to go.

United have already collected more points than when they were last in the top flight in 2007 and ended up going down. And, incredibly, they are only now two points off Chelsea in the final Champions League position. It is quite some story.

With City’s clash with West Ham called off more than four hours ahead of the scheduled kick-off, referee Jon Moss passed the Bramall Lane pitch playable 90 minutes before action got under way.

And Moss clearly made the right call, with the wind and rain relenting long before the 2pm start time, and the sun breaking out just as Sheffield United kicked off.

Certainly, Blades boss Wilder will have seen much worse conditions from his days managing Bradway FC in the Meadowhall Sheffield Sunday League. 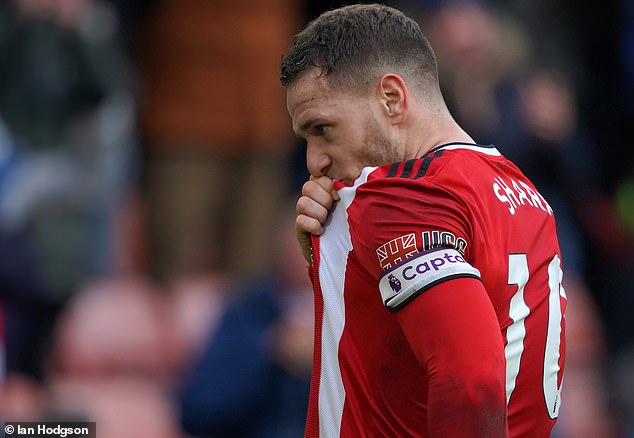 Sharp scored his second league goal of the season, both of which were against Bournemouth 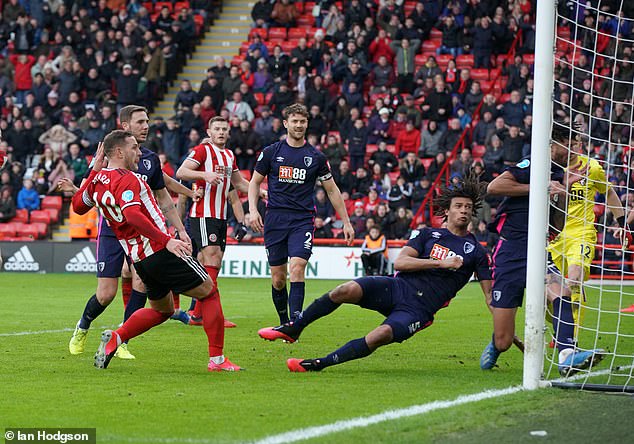 With the ball travelling fine across the turf, United had a good early chance when John Fleck’s goalbound shot from Oli McBurnie’s pull back was blocked by Simon Francis.

Yet the home side’s defence, which had previously conceded only 11 Premier League goals at Bramall Lane all season, was uncharacteristically sloppy in the early stages.

Bournemouth forward Ryan Fraser was breaching their backline at will and Harry Wilson and namesake Callum both came close from two of his crosses. So it came as no surprise when the visitors took the lead after only 13 minutes.

On his home debut, United’s £22million record signing Sander Berge – whose family were unable to travel here from Norway because of the storm – was the guilty party. He gave the ball away just outside his own box.

Harry Wilson then fed through Fraser, who cut the ball back to the on-loan Liverpool winger. And though Wilson’s shot was blocked by John Egan, Callum Wilson clinically dispatched the rebound into the roof of the net. 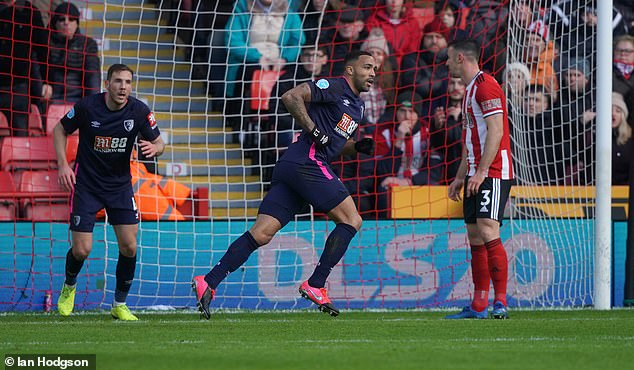 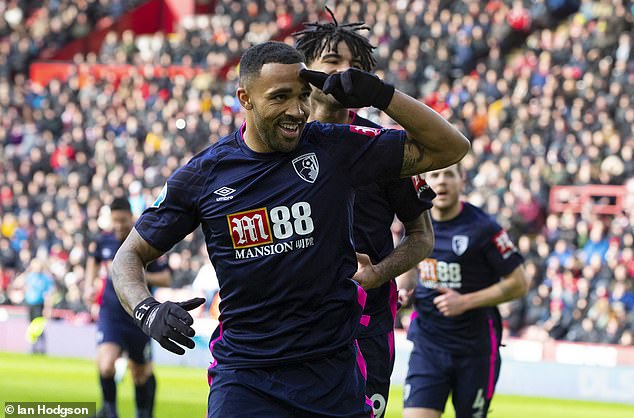 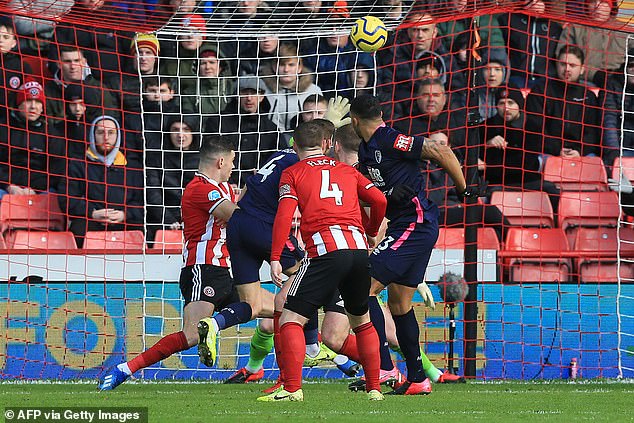 That goal, though, seemed to spur the hosts into action and they started peppering the Cherries goal. United skipper Billy Sharp hit the side netting from a narrow angle, Jack O’Connell headed over and Ollie Norwood saw a shot deflected just wide off Nathan Ake.

Enda Stevens was booked for a full-blooded tackle on Harry Wilson, which had Eddie Howe up in arms on the touchline, but it served as further proof the Blades had shaken off their slow start.

Aaron Ramsdale was then called into action to keep out Oli McBurnie’s header from the first of three successive Blades corners on the stroke of half-time; pressure which finally took its toll on Bournemouth.

From Fleck’s inswinger, Berge stuck out a long leg to keep the ball in play and after Fraser stopped Egan’s shot on the line, Sharp was on hand at the back post to hammer home just his second Premier League goal; the first of which was an equaliser at Bournemouth on the opening day of the season. 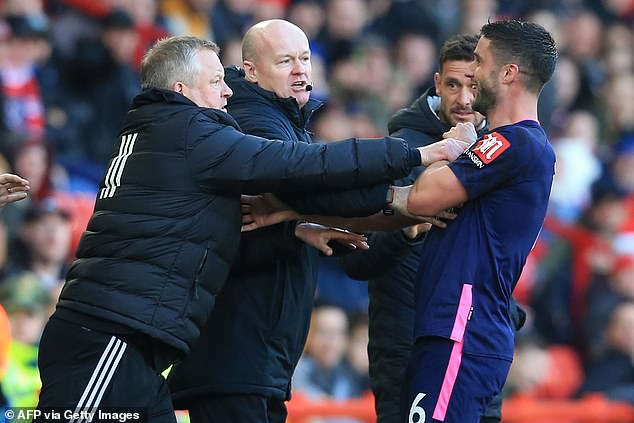 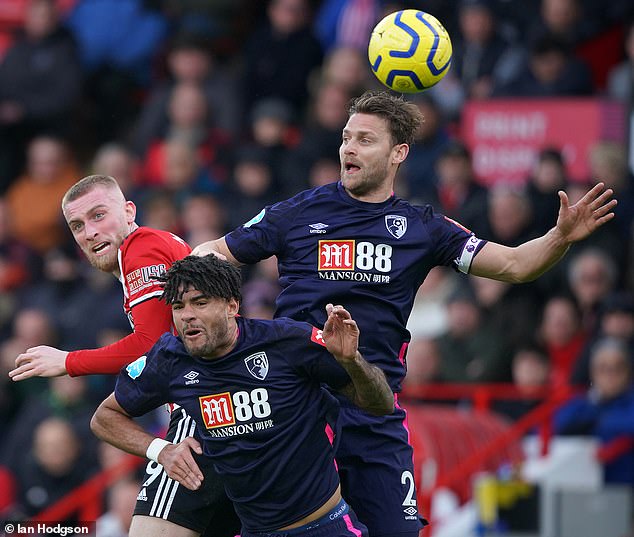 Sharpe was in again immediately after the break, when he tested Ramsdale with a quickly taken shot from McBurnie’s knock down.

And while things were hotting up on the pitch, tempers even flared on the touchline. When the Blades bench complained about Dan Gosling going down too easily from Egan’s tackle, Surman stormed over to get the ball back and pushed manager Wilder, who shoved him back.

Fourth official Lee Mason had to get in between Surman and Wilder – who were both booked – before a burly Bramall Lane security man blocked other Bournemouth players from getting involved.

Back on the grass, Dean Henderson pulled off a brilliant diving save to keep out Fraser’s powerful left-footed drive after a rare Bournemouth attack. Then home sub Lys Mousset had the chance to win it, but his effort was blocked by Adam Smith.

However, Mousset more than made amends for his miss four minutes from time. From Stevens’ pass, Mousset slipped the ball to fellow replacement Lundstram, who took one touch before firing past Ramsdale to send the Bramall Lane crowd crazy.