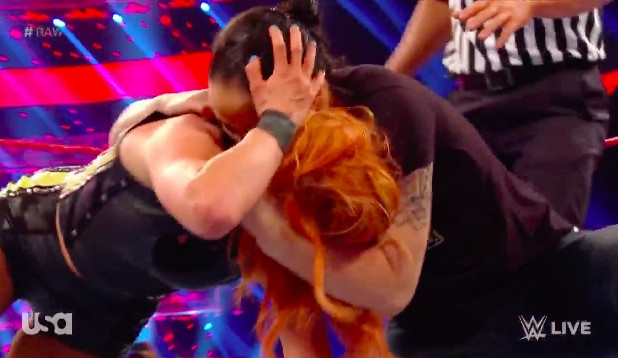 It looks like The Man has a Raw Women’s Championship challenger heading into WrestleMania, and she’s hungry.

On Monday night’s Raw, Becky Lynch successfully defended the championship against Asuka in a barn-burner. Immediately thereafter, two-time NXT Women’s Champion Shayna Baszler hit the ring to attack Lynch from behind, choking her out in the Kirifuda Clutch. If you follow Baszler’s career on NXT, that’s par for the course. She’s a bully who loves opportunistically attacking people and squeezing them into unconsciousness. What you might not know from NXT is that Shayna is … a vampire now?

With Lynch down, Baszler removed her mouth guard and proceeded to bite a chunk out of Lynch’s neck. No, really.

After being drained of her viscous, red liquid, Lynch was attended to by EMTs who walked her though the backstage area and tried to convince her to get into the back of an ambulance and go to the hospital Local Medial Facility. Lynch, presumably freaking the hell out because someone just tried to eat her on live television, pushed the EMTs down and decided to drive the ambulance herself.

Here’s hoping they’ve got replacement neck meat at the Local Medical Facility. I guess we’re calling her “Iron” Shayna Baszler from now on. And the blood of Gangrel flows through her veins for eternity, apparently.