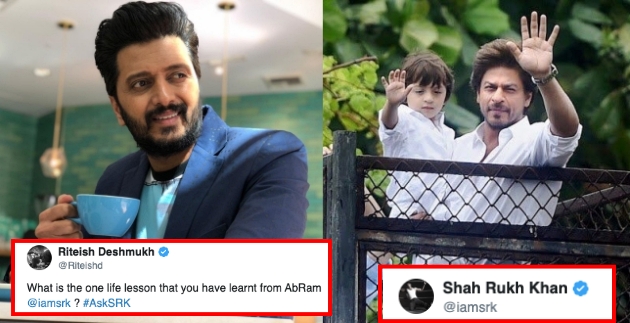 Shah Rukh Khan is away from the silver screen for over a year but he keeps interacting with his fans on social media. SRK often conducts #AskSRK sessions on Twitter with his fans and in one of them, Riteish Deshmukh had a question for him.

Ritiesh asked, “What is the one life lesson that you have learnt from AbRam @iamsrk (sic).”

To which, King Khan replied, “Whenever you are sad hungry or angry…cry just a little bit while playing your favourite video game (sic).”

SRK is known to give some witty answers. In an another #AskSRK session when a fan asked him when is he doing a movie with AbRam, he replied, “As soon as I get his dates.”

AbRam is the youngest son of King Khan and is quite famous on social media too. SRK often shares pictures of AbRam with his fans.

A few days ago, he shared a picture in which AbRam was seen doing some karate. He captioned the pic, “You train…u fight…u succeed. Then do it all over again. I think with this medal, my kids have more awards than I have. It’s a good thing…now I need to train more! Proud and inspired!”

AbRam is such an adorable kid.