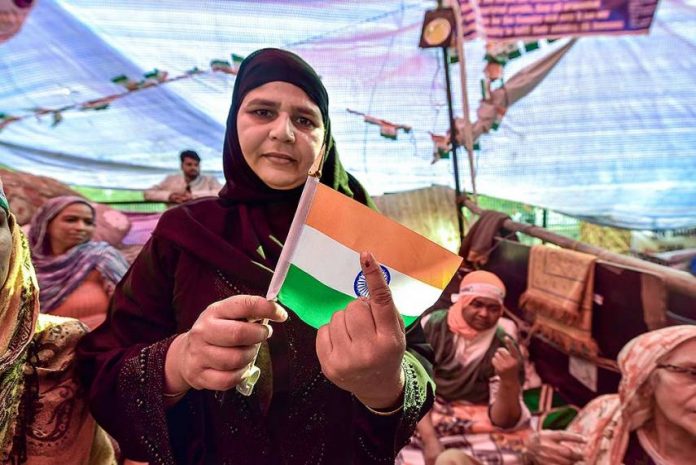 New Delhi: On a sit-in for over a month against the Citizenship Amendment Act, women protesters at Shaheen Bagh voted in batches Saturday so that the agitation remains unaffected.

While some of the women voted in the morning, others chose to get their fingers inked in the afternoon and the remaining in the evening.

Mehzabeen Qureshi, who returned to the protest site after voting said, “I stayed at home to let other women in the house go out and vote. Now I have joined them here at Shaheen Bagh after voting. I voted today to secure democracy.”

Zaheeda Khan, another resident of Shaheen Bagh, said they decided to vote in batches. “The women here had decided a day before voting that some of them would go out for voting in the morning, while others will stay back for chores. The others will go in the afternoon and then come back to the protest site.

“By the evening, we will be a full house again, all geared up to continue our protest,” she said.

Zahra Sheikh said they are determined to exercise their right to vote as it is crucial for a democracy. “We started our day knowing that it will be of double importance for us. We want to ensure that democracy survives hence, every citizen of Shaheen Bagh is voting,” she said.

In the meantime, the menfolk from Shaheen Bagh filled in at the protest site when the women protestors were away completing domestic chores.

Taking a jibe at Uttar Pradesh Chief Minister Yogi Adityanath’s “biriyani” remark, Mohammad Ayub, a resident, said they were voting to prove a point that they were not being served any “biryani”.

Adityanath was served a notice by the Election Commission for his “Kejriwal is feeding biryani in Shaheen Bagh” comments.  The Shaheen Bagh protest site had become a focal point in the BJP’s poll campaign.

“Many people have alleged that we were protesting for Delhi elections and that some political parties were funding us and serving ‘biryani’. They should know that we are still protesting as Delhi votes and will continue the agitation after the polling,” Ayub said.

“No party serves us ‘biryani’. The women cook and bring food to feed the protestors,” he added.