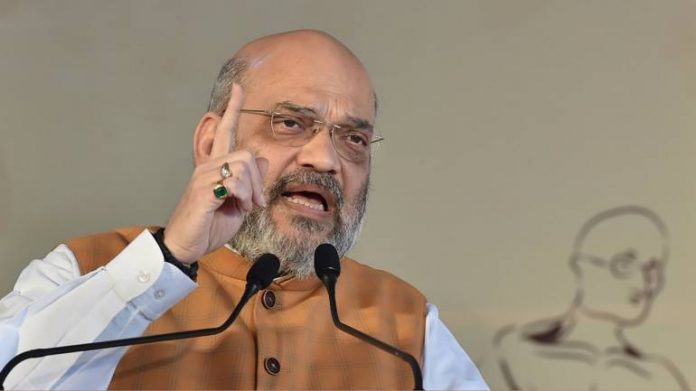 New Delhi:  Union Home Minister Amit Shah Thursday alleged that the anti-CAA protest at Shaheen Bagh was a ‘joint venture’ between the AAP and the Congress, and asserted that the ‘tukde-tukde gang’ would get a ‘shock’ when the Delhi election results will be declared.

The former BJP president, who held as many as three roadshows in different parts of the national capital on the last day of the campaign for the high-stakes Delhi assembly elections, said his party would emerge victorious in the elections as people will vote for country’s security, development and good governance.

The controversial slogan of ‘goli maro’ was again raised during Shah’s roadshow in West Delhi’s Hari Nagar constituency where he was campaigning for party candidate Tajinder Pal Singh Bagga. However, police stopped those who raised the slogan.

“Shaheen Bagh is the joint venture between the Aam Aadmi Party and the Congress,” he alleged, adding that Delhi Chief Minister Arvind Kejriwal and Congress leader Rahul Gandhi were worried that Shaheen Bagh is being discussed.

“I want to ask them why the security of the country should not be an electoral issue? Why are the people sitting in Shaheen Bagh demanding ‘Jinnah Wali Azadi’ and why the tukde-tukde gang is supporting them? Shame on these people,” he said at a roadshow in Seemapuri constituency in northeast Delhi.

Asking people to vote for the BJP, he said, “I want to tell all of you that tukde-tukde gang is going to get a shock because you are going to press the button on lotus symbol on February 8 for development of Delhi and the country.”

“You all know that the people of Delhi as well as the whole nation was saluting the valour of the army, but do you know who was most unhappy? First Rahul Gandhi, second Arvind Kejriwal and third was Imran Khan sitting in Pakistan”.

Shah said Kejriwal, Gandhi and Khan had a problem with the surgical strike.

“All three had a problem with the surgical strike. I want to ask whether such people should be handed over the power in Delhi? These people are very dangerous for the security of the nation.

“On the other hand, the central government is constantly working for the public interest, providing housing, gas connections and basic facilities to the people,” he said.

Alleging that the Kejriwal-led government has failed to deliver on its promises, Shah claimed that no work has been done in last five years.

“Kejriwal has not done any work in the last five years. He had promised that 500 schools and 50 colleges will be opened, five thousand new buses will be added to the fleet. He even claimed that he will make Delhi a city like London.

“Today it is difficult to differentiate whether there are potholes on the roads of Delhi or there is a road in the potholes. On the contrary, they did not allow people of Delhi to take benefit of the schemes of the Central Government,” he said, claiming that Kejriwal did not allow Ayushman scheme to be implemented in Delhi.