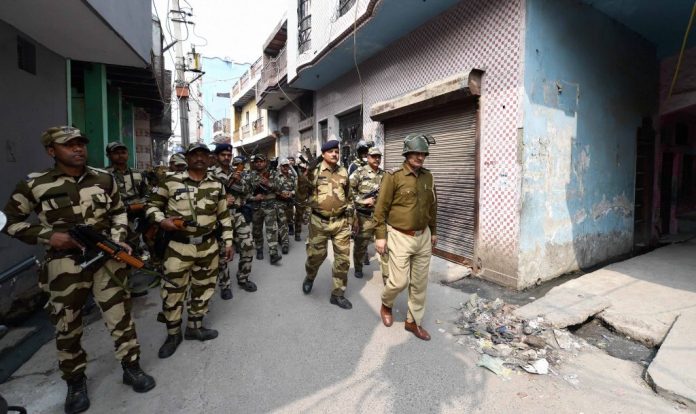 New Delhi: Security personnel, including paramilitary forces, conducted flag marches in the riot-hit areas of Chand Bagh, Jaffrabad, Bhajanpura, Yamuna Vihar and Maujpur as tension simmered Wednesday in the wake of the communal strife that has claimed at least 20 lives.

Authorities said 20 people have died in the violence since Monday. Unofficial sources have put the figure at 22.

There was a heavy deployment of force in the Chand Bagh area and security personnel did not allow anyone to come out on the road. Some of the lanes were blocked with residents saying they had closed them for their own safety.

In the area where Intelligence Bureau (IB) officer Ankit Sharma’s body was found, the road was littered with stones and glass shards, giving an indication of the heavy stone pelting in the area.

Delhi Police’s Special CP (Law and Order) SN Shrivastava, who was appointed to the post Tuesday night, Additional Commissioner of Police Mandeep Singh Randhawa were in the Bhajanpura area to take a stock of the law and order situation.

Entry and exit gates at all Metro stations that were closed in view of the violence have been opened, the DMRC said, adding that normal services have resumed in all stations.

Entry and exit gates of Jaffrabad-Maujpur and Babarpur had been shut since Sunday as violence swept northeast Delhi.