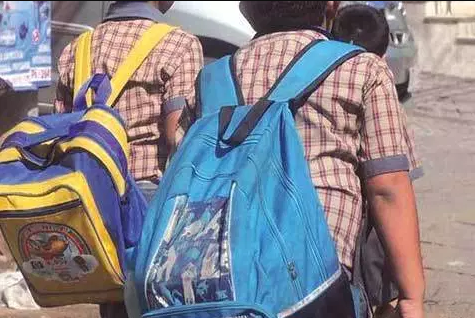 Berhampur: Even as the Centre last year issued directives to reduce the weight of school bags, many children in several schools in Ganjam district are forced to carry heavy bags.

A report submitted by the District Project Coordinator (DPC) of Ganjam claimed that almost all private schools in the district have been found flouting the school bag weight norms laid down by the National Commission for Protection of Child Rights (NCPCR).

The report said barring a few schools, students in almost all schools of the district were found carrying heavier bags.

The state government has prescribed to private schools to follow only NCERT and SCERT books, but the schools do not adhere to this norm.

As per the Ministry of HRD guidelines issued last year, the maximum weight of a school bag for students of Classes I and II should not exceed 1.5 kg while the weight of the bags for students from Classes III to V should not be more than 3kg.

Similarly, school bag weight of Classes VI and VII should not be more than 4kg, while for Classes VIII and IX bag weight should be 4.5 kg and 5kg for Class X students.

The state government had advised BEOs to make surprise visits to schools to inspect the compliance of the MHRD’s cap on weight of school bags. In case any deviations are found, the squads will report the matter to the DEO.

The parents alleged the BEOs were following a special checking rule for some months but as the same was not done by the officials concerned now, private schools get chance to break the rules.

When headmasters of some reputed private schools was asked, they said as the students purchase copies from outside the school, this increases the weight of their bags.

Ganjam DEO Amulya Kumar Pradhan said he has joined a few months back and he is not aware of the matter.

He clarified that he will conduct a meeting in this regard with guardians and teachers of private schools and they will be informed to work as per rules being laid down from time to time.

Educationists are of the view that only forming squads is not enough, awareness has to be created to ensure that rules are followed.