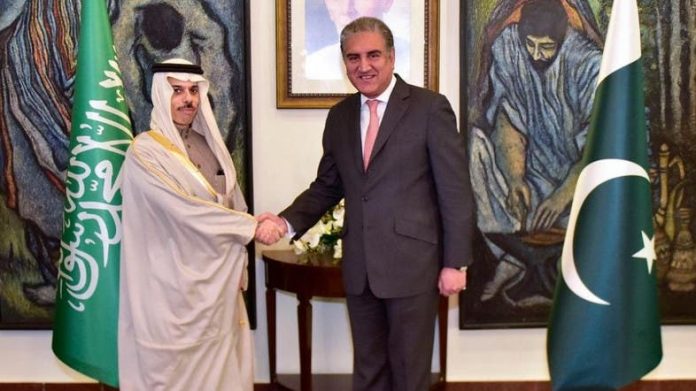 The Pakistan Foreign Office said in a statement that the two ministers reaffirmed the strategic importance of the bilateral relationship and reiterated the shared resolve to deepen the cooperation in diverse fields.

Foreign Minister Qureshi expressed appreciation for Saudi Arabia’s steadfast support for the Kashmir cause, including as a key member of the Saudi-led Organisation of Islamic Cooperation (OIC Contact Group) on Jammu and Kashmir, the statement said.

“Views were exchanged on working together to advance the Kashmir cause, including from the OIC platform,” it said.

They also exchanged views on regional developments and agreed to remain in close contact.

Earlier, a media report said that Saudi Arabia was not doing enough to arrange a meeting of the OIC Council of Foreign Minister (CFM) on Kashmir despite requests by Pakistan.

In its report Monday quoting a diplomatic source, the Dawn newspaper said that Islamabad’s feeling of unease with the OIC on its failure to get the CFM’s meeting was growing, as Riyadh was showing reluctance to convene the meeting on Kashmir on Pakistan’s request.

In December, there were plans to convene a meeting of the foreign ministers of the OIC on Kashmir by Saudi Arabia, in an apparent move by the kingdom to please Pakistan which skipped a recent summit of Muslim nations in Malaysia seen by Riyadh as an attempt to create a new bloc to replace the 57-member grouping led by it.

Prime Minister Imran Khan had confirmed Pakistan’s participation in the summit hosted by Malaysia, but skipped the event at the eleventh hour due to pressure exerted by Saudi Arabia and the United Arab Emirates – key financial backers of the cash-strapped country.

The Jeddah-headquartered bloc, which is the second largest intergovernmental body after the UN, has usually been supportive of Pakistan and often sided with Islamabad on the Kashmir issue.

Pakistan has been pushing for the foreign ministers’ meeting on Kashmir since India abrogated the special provisions of Kashmir in August last year.

Although there has been a meeting of the contact group on Kashmir on the sidelines of UN General Assembly session in New York and a report by the OIC’s Independent Permanent Human Rights Commission on the alleged rights abuses in Kashmir, no progress could be made towards the CFM’s meeting.

Saudi Arabia, soon after Pakistan’s absence at the Malaysia summit, showed flexibility in December on the proposal for the CFM on Kashmir. The Saudi flexibility, however, was short-lived as Riyadh reverted to its position.

India, in a major diplomatic achievement in March last year, addressed the OIC meeting in Abu Dhabi for the first time.

India’s participation came despite strong demand by Pakistan to rescind the invitation to then External Affairs Minister Sushma Swaraj to address the grouping of the OIC which was turned down by the host the UAE, resulting in Pakistan’s Foreign Minister Qureshi boycotting the plenary.