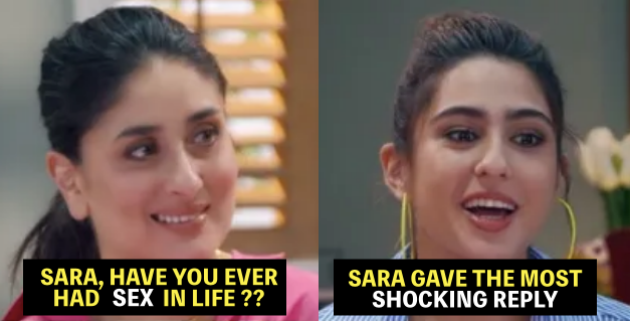 Hello people !!! As we all are aware of the Kareena Kapoor’ s radio show ‘What Women want ‘ and many celebs are invited at the show for those chit-chats and gossips , which are liked by the audience a lot.

This time Kareena invited her step daughter Sara Ali Khan , who is the daughter of Saif Ali Khan and Amrita Singh. Sara has been able to impress the audience by her acting and dancing skills . She debuted in ‘Kedarnath’ opposite Sushant Singh Rajput . After that Simbaa of her’s was also a blockbuster and she played much of a supporting role but was appreciated a lot . Now she will now be seen in Imtiaz Ali’s Love Aaj Kal 2 . opposite Karti Aryan .

Both of them are busy in promotions for the film. and Sara Ali Khan featured on the latest episode of Kareena Kapoor Khan’s radio show ‘What Women Want‘. She made some interesting revelations, and revealed whether she had a one-night stand ? Kareena can’t wait to tell Saif Ali Khan about it.

In the last segment of the radio show, Kareena asked Sara if she has ever sent naughty texts to anyone. She said, “I don’t want to know this or I hope your father is not listening.” Sara replied with a yes, and Kareena asked if she can tell Saif Ali Khan about this. Sara said, “Sure, I mean he might watch it.” Kareena then jokingly added that she would go home and tell Saif about this. Kareena then questioned Sara if she has had a one-night stand. She asked, “I don’t think I should be asking you this question but I don’t know. I mean, we’re in a modern family. One-night stand?” To Kareena Kapoor’s relief, Sara replied, “Never!”

‘Love Ajkal 2020′, is also about the modern age love and the struggles to keep upto the affection and know what real love is . Imtiaz , earlier made the movie with the name ‘Love Ajkal ‘ starred Saif Ali Khan and Deepika Padukone in leading roles. Love Aaj Kal is all set to release this Valentine’s Day, 2020.

Watch the video about the show below:

We are waiting again for some magic of Imtiaz Ali through this movie .