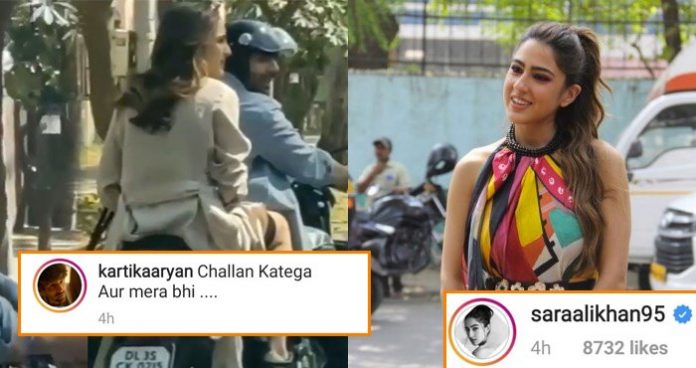 Sara Ali Khan and Kartik Aaryan will soon be seen sharing the screen space for the first time in their upcoming movie ‘Love Aaj Kal’, which is all set to hit the theatres on valentine’s day, i.e, 14th February 2020. The movie is a remake of the 2009 film with the same name that had Saif Ali Khan and Deepika Padukone in lead roles.

The lead pair, Sara and Kartik are making a lot of news these days regarding their rumored relationship. It has been long since the media house is busy churning out stories for the rumored couple on social media. While the duo still remains silent on their rumors, their PDA and gestures for each other tell a different story.

The video soon went viral with fans expressing their love for the couple. Sara Ali Khan was quick to respond to the hilarious post of Kartik Aaryan. She reacted with an angry emoji on Kartik Aaryan’s post.

To which Kartik Aaryan was quick to clarify that it was just a joke before he asked her to go and sleep. He wrote: “Joke hai amma joke….Soja” 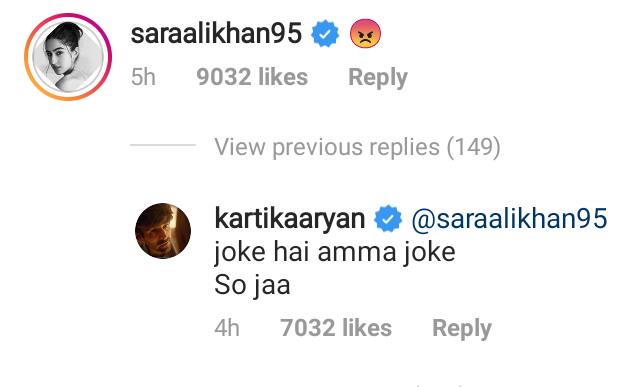 However, this isn’t the first time Kartik Aaryan has came up with a hilarious post featuring Sara Ali Khan. He has been sharing funny yet adorable videos and pictures on his Instagram with funny captions that you just can’t miss. Have a look at some of the pictures:

4. “I promise you
My expression is becoz of the food “: