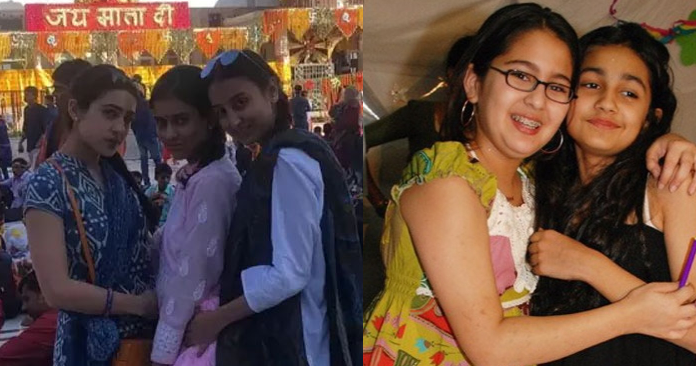 Sara Ali Khan is an Indian actress who works in Hindi films. A scion of the Royal Pataudi family, she is the daughter of actors Amrita Singh and Saif Ali Khan and the paternal granddaughter of Mansoor Ali Khan Pataudi and Sharmila Tagore. After graduating from Columbia University, Khan ventured into acting by playing the leading lady in the 2018 films ‘Kedarnath and Simba’. Both films were commercially successful and the former earned her the Filmfare Award for Best Female Debut that year.

Sara Ali Khan has not only managed to stun us with her appearance and acting but also by her incredible transformation from fat to fit. She used to weigh a whopping 96-kilos as a student and it took her about a year-and-half to lose that weight to get a killer body and chiseled face.

Many of us might not know
the fact that when she was four-years-old, she acted in an advertisement and
according to her father, Saif, the actress Aishwarya Rai proved to be her
inspiration for pursuing a career in films after she saw her perform on stage
in Chicago.

So today, we have gathered some unseen pics of the actress. Let’s have a look:

Baby Sara enjoying with her parents

Doesn’t this trio look extremely adorable? Sara with her mother and brother Ibrahim.

Another vintage picture of the actress with her father.

Playing with siblings is so much fun, right?

No matter how far you go, friends remain an essential part of our lives!! Sara Ali Khan visiting the temple with her friends.

Look at her smile! Well, who doesn’t like birthday parties? Right?

It’s truly said by someone, “No one in this world can love a girl more than her father”!!

Can you guess the girl on the left? Yes, its Sara! She cheered for Saif on Kaun Banega Crorepati in 2005.

Childhood days are certainly the best days of life!! Doesn’t she look remarkably cute in the pic?

This picture is from 2010, where the actress can be seen along with her father and his wife, Kareena Kapoor.

Well, it’s certainly a matter of great respect and pride to meet a soldier! Right??

Another set of delightful photos of the father-daughter duo!

This is how the actress used to look like before when she was not a part of this glam industry and used to study at Columbia University.

As a teenager, Khan struggled with her weight and had to commit to a strict workout regime daily to get fit.

She was also diagnosed with polycystic ovary syndrome (PCOS), which she ascribes as a cause for her weight gain.

Sara with her mother and actress Dimple Kapadia.

The time when they all used to be together as one happy family!

Another cute picture of the actress.

Sara and Ibrahim with their father and his then-girlfriend, Rosa.