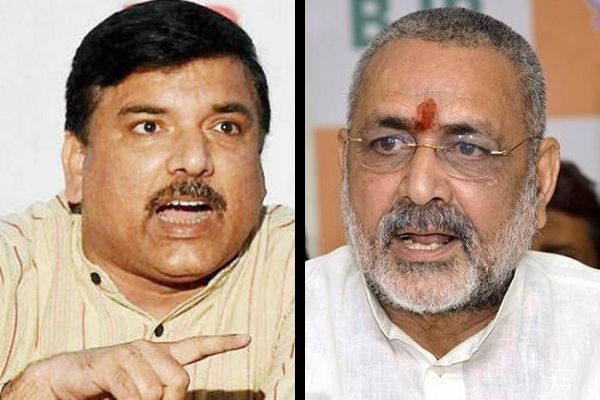 Just before Delhi was set to vote in 2020 elections on Saturday, on Friday AAP began its usual drama. The Aam Aadmi Party (AAP) politician Sanjay Singh, whose own links with PFI emerged recently, accused Union Minister Giriraj Singh of distributing money in Budh Vihar Phase 1 in Rithala Vidhan Sabha. He alleged that 240 BJP MPs were creating problems in different constituencies. Singh had also urged the Election Commission to take action.

In another tweet, Sanjay Singh reiterated his previous claim and added that the Union Minister was caught red-handed by people, distributing cash in Rithala. The video allegedly showed Giriraj Singh sitting inside a jewellery shop surrounded by several people. While one can see Giriraj Singh in the video, there is no proof that he was distributing cash to voters as alleged by Sanjay Singh.

In a press conference, Sanjay Singh also said, “BJP violated the Model Code of Conduct (MCC) during the entire campaigning period, by giving inflammatory statements.” He also urged the Election Commission to remove all BJP MPs who are not the residents of Delhi to be removed from the national capital. This has sparked a new controversy before the Delhi Assembly elections that are scheduled to take place on February 8.

The credibility of the Aam Aadmi Party has declined over the years, particularly after it was exposed that the gunman, Kapil Gujjar, who fired 3 shots in the air at Shaheen Bagh was an AAP member. Another man Mohammed Luqman found brandishing a gun at Shaheen Bagh also had alleged links to AAP. The police had also established a nexus between Sanjay Singh, radical Islamist organisation PFI and the Shaheen Bagh protests.

Read: As Kapil Gujjar turns out to be AAP leader, here is how Sanjay Singh, who felicitated the shooter, blamed Amit Shah for Shaheen Bagh shooting

According to the details produced by ED, a hefty sum of Rs 120.5 crores was credited in 73 bank accounts maintained by the Popular Front of India in 17 different banks. Out of these 73 accounts- 27 were directly maintained by PFI, 9 accounts were in the name of PFI’s related entity- Rehab India Foundation and the other 37 were in the name of certain individuals or entities in 17 different banks.

In the last 10 months, PFI received Rs 30 lakh as a donation in the form of cash, cheque, RTGS, NEFT, UPI, etc. Out of the large sum around 50 per cent was received in cash. Out of the cash donation, approximately 60-65 per cent was deposited in the bank and the rest was kept in PFIs national headquarters in Shaheen Bagh.

The ED documents say that the PFI President of Delhi, Mohammad Parvez Ahmed and it’s other members have actively participated in the anti-CAA protest in Shaheen Bagh.

Most importantly, it divulged that Md Parvez, the PFI chief was regularly in touch with Aam Aadmi Party leader Sanjay Singh through Whatsapp chats, phone calls and also by way of direct meetings. Further, Parvez had also been in touch with many Congress leaders including Udit Raj.

The Enforcement Directorate documents also revealed that Parvez was a member of many Whatsapp groups such as ‘Bhim Army Top-100’, ‘Unification of Muslim Leadership’, etc.