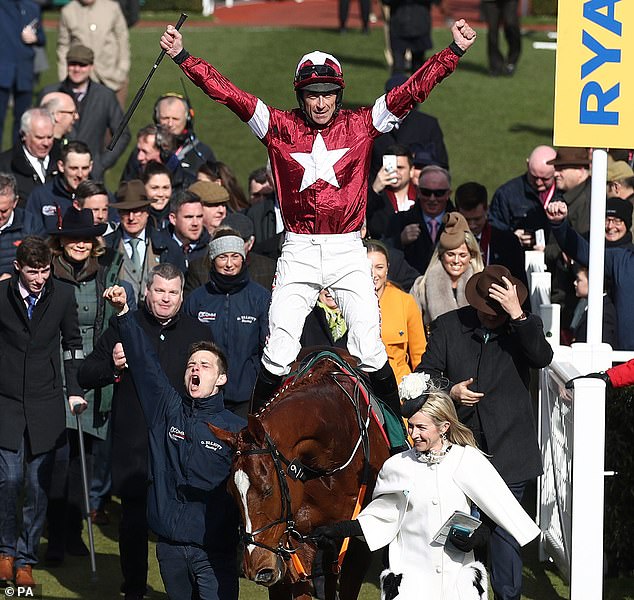 Samcro edged out Melon – and Faugheen – in a thrilling race for the Marsh Novices’ Chase at Cheltenham.

The 2018 Ballymore Novices’ Hurdle winner has had a chequered career since that Festival highlight – but returned to his best in a finish that had just about everything.

The pair battled it out up the famous hill and it could have gone either way, but in the end it was the Gordon Elliott-trained Samcro (4-1) who snatched the verdict on the line under Davy Russell. 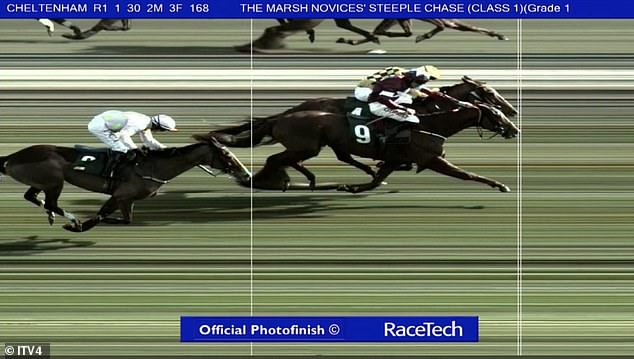 A photo finish was needed, with Samcro beating Melon by the thinnest of margins

Faugheen – with the packed stands willing him on – was right behind the first two in third spot, with Mister Fisher fourth.

Sent off the 3-1 favourite, Faugheen was away smartly, but Reserve Tank and Poker Play made the early running before Melon joined the leaders before the fifth fence.

There was early drama when Itchy Feet blundered and unseated Gavin Sheehan at the sixth fence.

Samcro travelled well and there was all to play for until Faugheen made a mistake three out that cost him ground at a crucial time. 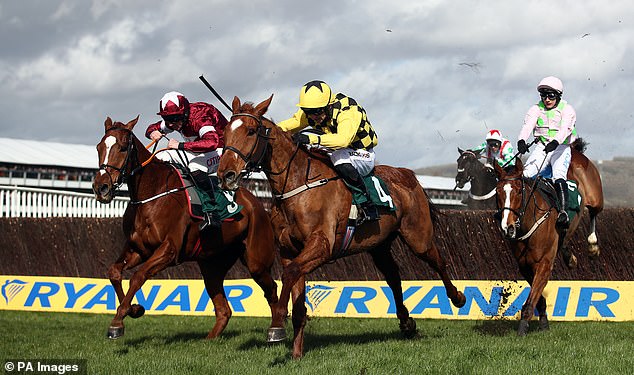 It left Samcro and Melon ahead of the pack with the former, wearing the Gigginstown House Stud colours, prevailing by a nose, as Faugheen rallied to be just another length behind.

Elliott said: ‘Samcro is one of the favourites in the yard. Obviously he was in the doldrums for a while, so to get him back and win a Grade One in Cheltenham is something else.

‘You can see how much it means to everyone in the yard. A lot of people have done a lot of work with this horse – they’ve spent day and night trying to get him right.

‘He hasn’t been scoping clean and it’s been hard to get him to scope right. We’ve done a lot of different things, like building him a new stable, and he’s pulled it off today.

‘Everyone was knocking him, saying this and saying that. I probably even lost a bit of faith in him myself, but the horses are flying and I just can’t believe it.’ 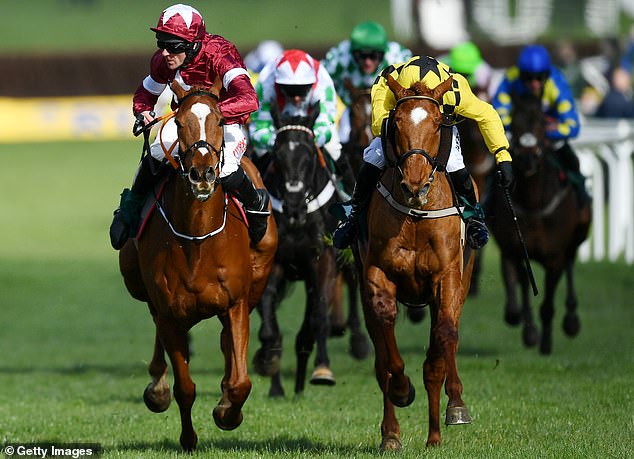 Melon, ridden by Patrick Mullins, was edged out of winning the first race of the day

He added: ‘I am a bit of a pessimist, but I thought Melon had got us on the line, to be honest.

‘He missed the second-last and Davy said that knocked the stuffing out of him. He jumped brilliantly apart from that.

‘It was a great race to watch, with Melon, Faugheen and Samcro – that’s what this place is all about.’