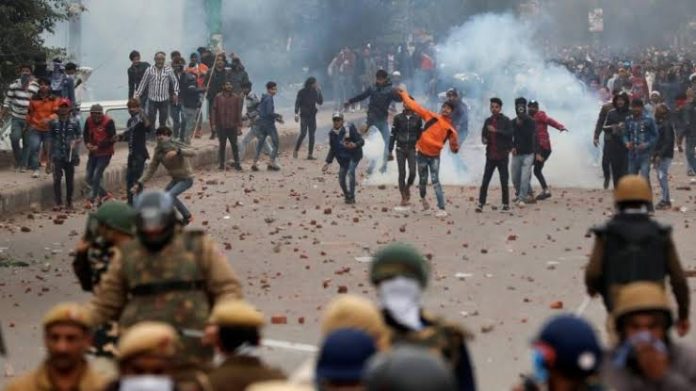 The National Capital of the country was in throes of unprecedented violence as Muslim anti-CAA protesters ran amok, indulging in violent skirmishes with pro-CAA supporters and law enforcement officials, especially in northeast Delhi.

The total breakdown of the law and order was evident by the fact that several policemen suffered injuries, with one head constable of Delhi police and one IB Constable losing their lives and a DCP being severely injured. The situation exacerbated as religious places of worship were targeted by the sparring sides. According to several reports, a mosque in Delhi’s Ashok Nagar was vandalised by a mob, a video of which was doing the rounds on the Internet.

Even as the anti-CAA rioters continued to hold the city by ransom, assorted liberals, spearheaded by “journalist” Sagarika Ghose floated a crowdfunding measure to rebuild the mosque in Ashok Nagar, that was reportedly damaged during the riots. She suggested Delhi Chief Minister Arvind Kejriwal start a chief minister’s relief fund to rebuild the mosque in northeast Delhi, the epicentre of the violent riots.

Sagarika tweeted, “I would like to contribute to re-building of Ashok Ngr mosque & towards bereaved families, including of Constable Ratan Lal. CM @ArvindKejriwal pls start a chief minister’s relief fund to rebuild NE Delhi @AamAadmiParty #DelhiRiots2020. Let’s do it, Dilli. Let’s rebuild, restore.”

Soon after Sagarika appealed the Delhi CM to institute a relief fund to rebuild the mosque, assorted liberals descended on her timeline, extending their support to the idea.

Actor Swara Bhasker, who has been instigating Muslims against the CAA, supported the initiative mooted by Sagarika and responded with “Me Too” on her tweet.

Me too! Pls RT Tweeple. https://t.co/GLByyMhzy5

Indian Express journalist Harneet Singh too rallied behind Sagarika and backed her proposal to renovate the mosque.

Please include me too in this… https://t.co/5CvsV4pdBI

Businessman Zafar Sareshwala too extended his support saying he would like to participate in the noble cause.

I too would like to participate in this noble cause https://t.co/dvXIVddof1

Quoting Sagarika’s tweet, washed-up actress Amyra Dastur said “Yes PLEASE! Would love to contribute to this! What a beautiful initiative.”

Yes PLEASE! Would love to contribute to this! What a beautiful initiative ???????? https://t.co/k0PbHu4rja

However, there were some netizens who were not enthused with the idea of crowdfunding reconstruction of the mosque. Taking a leaf out of liberals’ book, they suggested that instead of a mosque, a school or perhaps a hospital, which has a far more utilitarian value than a religious place, should be constructed instead.

One of the Twitter users did not mince words in expressing his disapproval with Sagarika’s idea of funding the rebuilding of mosques. The user sardonically added that since many mosques have been destroyed, there are enough empty plots for the construction of schools or hospitals.

Idea: now that many mosques have been destroyed, we have empty plots of land which can be used for construction of schools or hospitals https://t.co/XVv9Edh8V2

Another user echoed similar sentiments asking Sagarika why not build a school or hospital at the site of the destroyed mosque as there are enough mosques already.

Why not a School or Hospital ? Enough mosques toh hain . https://t.co/WJbfPfDwXe

It is pertinent to mention that before causing grave damages to public property in Delhi during the riots, the Muslim anti-CAA rioters had blocked one of the busiest arterial roads of the National Capital in their bid to prompt the government into revoking the Citizenship Amendment Act, causing huge losses to businesses in the area. The anti-CAA rioters have damaged scores on public and private property in the last two months worth hundreds of crores, but nobody came forward with a proposal for crowdfunding for those loses.