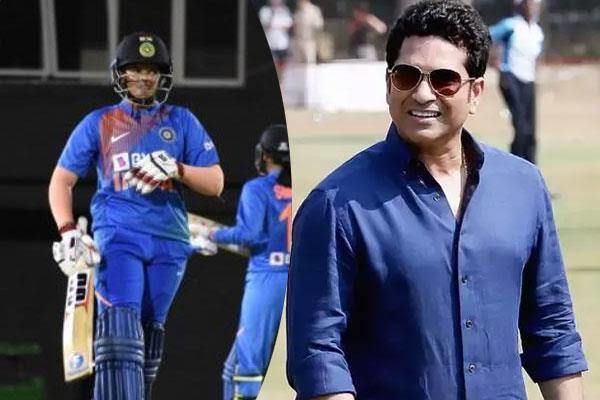 Melbourne: India opener Shafali Verma made it a point to watch her idol Sachin Tendulkar play in his last Ranji match at Lahli more than six years ago and the 16-year-old has now got the appreciation from the cricket icon himself for being there at his farewell domestic match.

Replying to Shafali, Tendulkar wrote on Twitter: “It was nice meeting you too, Shafali. Hearing from you on how you had travelled all the way to Lahli to see my last Ranji Game & now seeing you play for India is amazing. Keep chasing your dreams because dreams do come true. Enjoy the game and always give your best.”

Shafali, who is here as part of the Indian team for the women’s T20 tri-series, met Tendulkar recently. She posted a picture with him on her Twitter handle. Tendulkar was here for the Bushfire charity match which was played Sunday.

“The reason I took up this game was because of Sachin sir. My whole family has not just idolised but literally worshipped him. Today is a special day for me that I got to meet my childhood hero. It was a dream come true for me,” Shafali had captioned herpicture with Sachin. .

Tendulkar also said he felt good to wield the willow once again on a cricket pitch when he went out to bat during the charity match to raise funds for the Australian Bushfire victims.

Tendulkar batted for one over during the innings break of the charity match as he faced Australia women’s team all-rounder Ellyse Perry. The Indian legend was the coach of Ricky Ponting XI in the match.