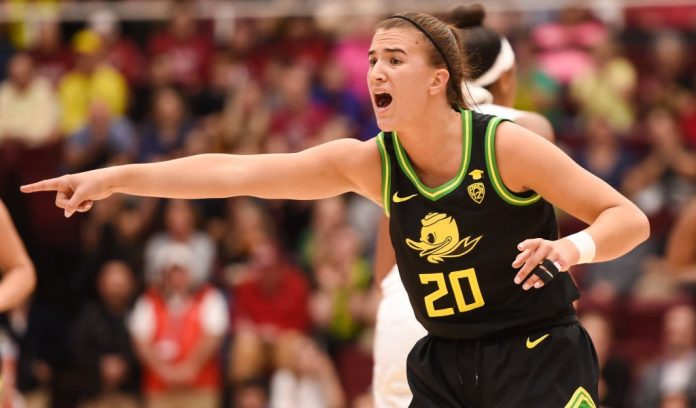 On Monday morning, thousands gathered at Staples Center in Los Angeles to pay their respects to Kobe and Gianna Bryant one more time at the celebration of life for the Laker legend and his daughter, who died last month along with seven others in a tragic helicopter crash.

Basketball stars, past and present, were on hand for the memorial service, with luminaries like Michael Jordan and Shaquille O’Neal speaking of their love for Kobe and telling stories to the assembled masses. The women’s game was also well represented, with Geno Auriemma, Diana Taurasi, and Sabrina Ionescu all appearing on stage to offer some remarks on Kobe and Gigi, and the impact both had on them and the women’s game at large.

Ionescu gave a powerful speech, discussing her relationship with Kobe and Gianna, as well as issuing a call to action to those in attendance to continue Bryant’s legacy moving forward by being as strong advocates of women’s hoops as he had become.

After delivering that speech, Ionescu flew back up the coast of California to Palo Alto, where her Oregon Ducks team had a game against Stanford on Monday night. Ionescu entered the game just nine rebounds shy of 1,000 for her career and the chance to be the first player in D-1 history to have 2,000 points, 1,000 assists, and 1,000 rebounds in their career. Late in the third quarter, Ionescu hauled in that 1,000th rebound, fittingly making history on the day when the basketball world celebrated the life of her mentor and idol.

As Ionescu finishes off her incredible collegiate career this season, with an eye on the WNBA for this summer’s draft — and almost assuredly going to New York — she looks to continue to advance the women’s game to new heights and popularity, which as she mentioned in her speech, is something Kobe was striving to do as well.