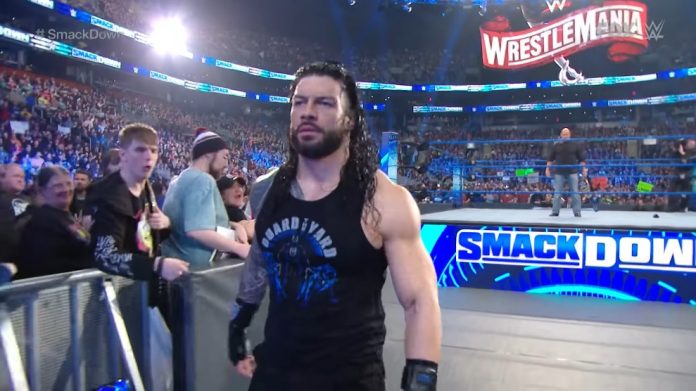 The spread of COVID-19 has already drastically changed this year’s WrestleMania, causing it to be moved from a stadium to the empty Performance Center and to be pre-taped rather than broadcast live, and now concerns about the virus have led to a major change to the card. According to a new report by Ryan Satin of Pro Wrestling Sheet and WWE Backstage, Roman Reigns has pulled out his match with Goldberg for the Universal Championship.

Reigns reportedly told WWE he isn’t comfortable performing on shows during the current pandemic because he’s immunocompromised from dealing with leukemia twice in his life, most recently from late 2018 to early 2019. Someone else will challenge Goldberg for the Universal Championship at WrestleMania.

Reigns isn’t the only WWE Superstar who won’t be wrestling for a while because of coronavirus concerns. Rey Mysterio and Dana Brooke were reported earlier this week to be in quarantine, which led to Brooke being pulled from the elimination match for the Smackdown Women’s Championship.

Reigns also isn’t the only immunocompromised person on the WWE roster. Brie Bella has expressed concerns about her husband, Daniel Bryan, who has an autoimmune disease. Bella says that Bryan plans to go into quarantine away from his family after he’s done taping WWE shows in Florida.

This news of Reigns pulling out of Mania comes on the same day that Variety published a piece in which Stephanie McMahon talks about WWE’s guidelines to protect talent and crew from coronavirus. These measures include everyone’s temperature being taken when they enter the set, anyone who’s “been out of the country” or “been in contact with anybody who’s been out of the country” is not allowed in the PC, and only “essential personnel” can attend the tapings at the Performance Center, with no extra people hanging out in catering like there would be at a typical WWE event.

But as thorough as WWE’s precautions might be, they clearly aren’t enough to put the entire roster at ease, and pro wrestling matches are still clearly not social distancing.

Brazilian President Jair Bolsonaro does this while seeking hydroxychloroquine from India