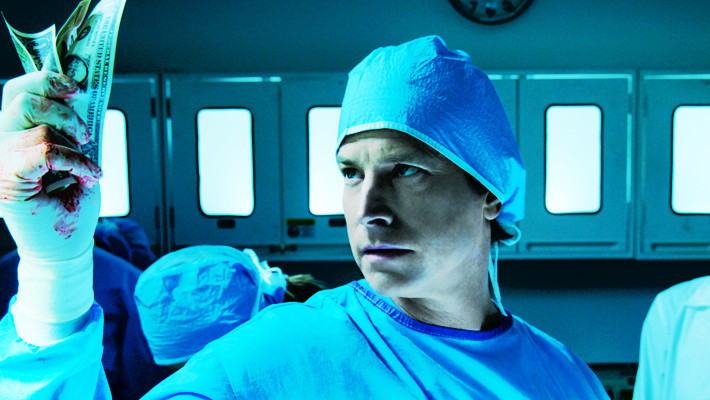 Here’s a fun challenge that doesn’t involve dipping your balls in soy sauce or lighting yourself on fire with an iPhone charger: go to Rob Huebel’s IMDB page and see if you can think of one essential TV comedy from the last 15 or so years that he hasn’t appeared in. You’ll realize that it’s difficult. (Okay, Community, but getting slapped by Chevy Chase basically counts.) You’ll also realize that Huebel’s penchant for making an impact in those appearances (such as his turn as a price gauging tent salesman in Parks and Rec) is also quite impressive.

Despite all that, however, it’s probably fair to say that aside from his work on Human Giant, Huebel’s signature role is as Owen Maestro on Adult Swim’s cult-favorite Childrens Hospital. And now, Maestro, Lola Spratt (Erinn Hayes), and a smattering of others (in some well-sprinkled guest spots) are back with Medical Police, a Netflix-situated spin-off (which is streaming now) that puts Maestro and Spratt in the middle of a comedy minefield and a race against the clock to save lives. Sound like your kind of thing? Good! But before you split, do take the time to see what Huebel had to say about books for messed up kids, death by beignets, and whatever trauma Nic Cage brought to his door in our latest entry in the Uproxx 20 series.

1. You walk into a bar. What do you order from the bartender?

Lately, scotch on the rocks but I may have a problem.

Killer Mike of Run the Jewels is a good mix of crazy, rapper-lifestyle (strippers) and also cool political/inspiring stuff.

3. What’s currently waiting for you on your DVR or in your streaming queue?

I’m just going to New Orleans and eating everything until my chest explodes. Might take an hour.

5. What websites do you visit on a regular basis?

6. What’s the most frequently played song on your mobile device?

7. If you could go back and give your 18-year-old self one piece of advice what would it be?

Fucking vote. It’s your only voice. For reals.

8. What’s the last thing you Googled?

I Google-translated something into Portuguese so I could respond to a kid asking a question about Medical Police on Insta. He thinks we film the show there.

Dogs. But cats are delicious (shoutout to Alf).

11. What book are you most likely to give as a gift?

“Blowing the Bloody Doors Off” by Michael Caine. It’s his memoir and I bought it to read onstage/in-character but then realized I couldn’t do him because I don’t do impressions and Steve Coogan does that in his The Trip movies so that would be lame. So it’s just on my table waiting to be “gifted.” Also “The Giving Tree” by Shel Silverstein if it’s a kid’s birthday party and the kid seems kinda fucked up.

12. What’s the nicest thing anyone has ever done for you?

My wife gave me a night all alone in a hotel room for a Christmas gift to watch Clemson play football and burp and fart and sleep by myself. I almost cried. And they won! And I farted!

14. You have an entire day to do whatever you want. What would you do?

15. What movie can you not resist watching if it’s on?

16. The sports team or teams you’re most passionate about?

17. Where did you eat the best meal of your life?

French Laundry (Napa Valley). I took my wife back when she was my girlfriend to be like, “Let’s get fucking real.”

18. The last movie you saw in a theater?

Uncut Gems. And Knives Out (I don’t mess around).

19. Who was your first celebrity crush?

20. What would you cook if Nic Cage were coming to your house for dinner?

He’s not coming to back my house ever again! I have a child! I’m married! Please. We just want to be left alone.