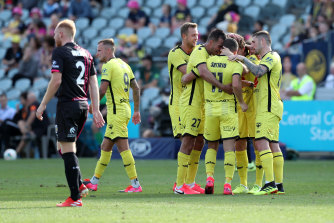 Wellington have continued their march towards the A-League finals with a 3-1 win over Central Coast on Sunday.

In front of 3773 fans at Central Coast Stadium, Phoenix claimed another three points and corrected their recent hiccups away from home against the struggling Mariners.

It continues a brilliant season for Wellington under first-year coach Ufuk Talay, with just two losses in their last 15 matches and 33 competition points from 19 games.

“For me, the boys go out there, they put their heart on their sleeve and they work hard when we don’t have the ball and try to play a certain brand of football that we want to play.

“Sometimes it works and sometimes it doesn’t. For me it’s the attitude and the application and I think the boys deserve where they are at the moment.”

In stark contrast, Alen Stajcic’s men have kept just one clean sheet this season, have conceded 18 goals in their past five games, and have lost each of their last eight matches.

The Mariners started with enthusiasm but once again lost their way early on.

In took just 18 minutes for Wellington teenager Liberato Cacace to celebrate his 50th A-League appearance by slotting the opening goal under Mark Birighitti.

“It’s a milestone for him, it’s nice for him to actually get a goal in his 50th game as well,” Talay said.

“For us, he’s a very integral part of the way we set up and the way we play and I’m very happy with the way he’s going.”

Gary Hooper made the most of some weak defending to score his third in four games 12 minutes later, and substitute Jaushua Sotirio polished off the win with an almost identical goal late in the second half.

A nice strike from Brazilian Jair in the 89th minute put the Mariners on the board and prevented Phoenix from claiming a third straight clean sheet.

Central Coast face Brisbane Roar at Suncorp Stadium on March 13 looking for a first win in two months since they defeated Melbourne Victory in Gosford.

Phoenix play Victory next at Sky Stadium on March 15.