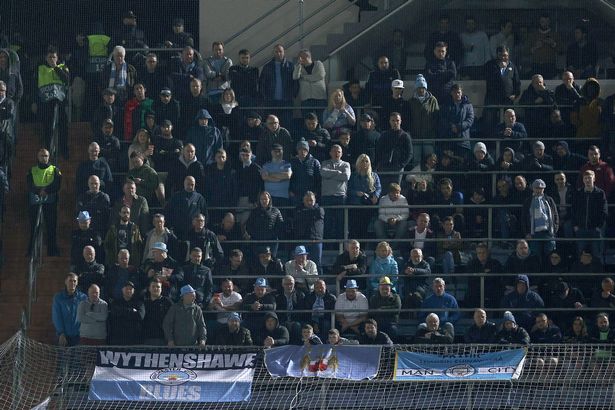 City fans had travelled to the Bernabeu in the hope of seeing their side take a lead back to the Etihad for the second leg in two week’s time.

But Ferdinand took a swipe at the lack of away fans around the 81,000 capacity stadium brutally claiming that there ‘weren’t many around’.

“When you speak to City fans, well, there aren’t that many around…” he said, even causing ex-City goalkeeper Joe Hart to burst out laughing and saying ‘wow’.

“@rioferdy5 killing city fans with one line on “when you see City fans.. and there isn’t many” once a red,” tweeted one fan.

“Rio having little dig at the city fans even joe hart hasn’t a reply to it,” a third social media user wrote.

“Ferdinand taking a cheap shot at City fans,” said another.

“Ferdinand took a big jab at city there,” claimed a fifth.

After the game, Ferdinand told BT Sport that he believed Kevin de Bruyne is the best midfielder in the world right now.

The Belgian scored a penalty to give City a 2-1 lead after Gabriel Jesus’ header cancelled out Isco’s opener for Real.

“I don’t think there’s anyone near him in terms of what he can do,” said Ferdinand.

“He does everything, in terms of his athleticism, running away from people, his pass appreciation. His decision making in the final third, 99 per cent of the time he gets it right.”

Pep Guardiola made the shock decision to set up his side in a 4-4-2 formation, with De Bruyne and Bernardo Silva deployed as strikers.

“In four years with Pep, he sometimes surprises,” De Bruyne said. “Sometimes players aren’t told until the game what we need to do. There were some good and some lesser moments.”