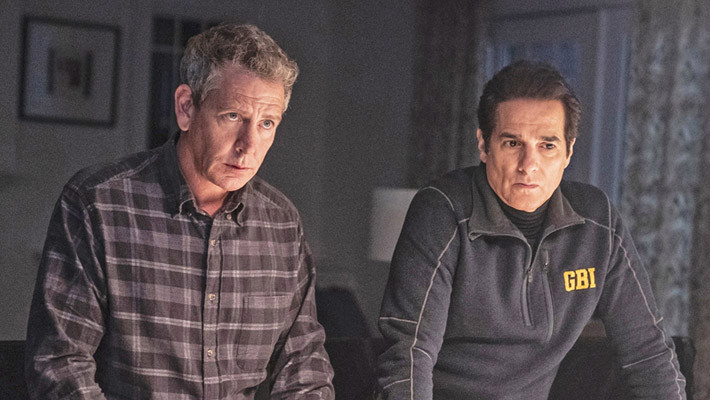 HBO’s The Outsider (an adaptation of the Stephen King novel) is turning out to be a hell of a slow burn as the drama series unfolds. The fourth installment, “Que Viene El Coco,” aired on Sunday night, and the show’s prompting plenty of questions, but this week, we need a break from thinking too seriously, so I’m ranking something very bizarre.

The Outsider‘s murder mystery ties in those supernatural touches so famous to the works of King. We’ve witnessed the frustrations of detective Ralph Anderson after his big fail in arresting Terry Maitland, only to discover baffling details about the murder of Frankie Peterson. Ralph’s been puzzling over contradictory evidence tying Terry to two places at once. And obviously, Terry can’t defend his innocence after being shot and killed, but I think everyone’s accepted by now that he likely wasn’t guilty. Meanwhile, King favorite Holly Gibney has been hacking away at a doppelganger theory, and all of this is going nowhere fast. (It should be noted that screenwriter Richard Price has made some curious changes from King’s source material, which we’ll discuss here.)

This week, Gibney uncovered two other murder cases where suspects appeared to be two places at once. No answers surfaced there yet, but the episode did end with hints at King’s take on the mythical El Cuco, a ghost-monster that is pretty much the bogeyman. If you type this episode’s title into Google translate, you’re gonna end up with “What’s up, coconut?” That’s not much help at all, so it’s safe to say that the TV show wants us to think about this Goya painting (which does flash onto the screen during Holly’s bathtub-bound research) that is literally titled, “Que Viene El Coco.” That’s the most straightforward this series will probably ever be, and this is all followup after Holly learns about a spirit called “the grief eater.” Maybe he’ll be tied to hoodie guy.

It’s all quite stressful. Again, it’s a slow burn, and to get through this, I think a diversion is in order. A lot of characters on this show are suffering from scratches. Maybe it’s time to take note of them all? Yes, let’s do that. And rank them from least to most mysterious.

This scratch is ranked lowest because, honestly, it’s the one being overplayed into oblivion. There’s a lot of lip service coupled with a lot of ambiguity, and I get that Terry’s plight directly ties to the central mystery, but I feel that we saw too much talk about this scratch before we actually saw the scratch happen. It’s the scratch that promised a lot of drama without much payoff. Glory insisted to Ralph that a cut is just a cut, but one of the Maitland daughters seemed to believe that this cut was worth mentioning to Ralph. However, Terry (at least the one who got arrested) never mentioned this cut, and we also never saw murder-Terry with a cut either. Maybe it was hidden, who knows? All we know is that Terry probably got scratched by Heath (an orderly or nurse at his father’s medical facility) when they both “slipped” in the hallway.

We’re not sure if it was truly a random encounter and accidental slip (the hallway was obviously freshly mopped) or if something nefarious was afoot. Maybe all of the above. Heath’s coworker said he wasn’t acting like himself that day and was super hostile, so this was probably “doppelganger” Heath? It’s frustrating and seems like it might lend itself to future plot holes. In other words, I’m not a huge fan of this scratch because it feels like overkill. We’re supposed to care a lot about it, and I somehow don’t.

Claude’s only trying to do his job and doesn’t know what to think about Ralph endlessly paying “friendly” visits to him. Makes sense. It’s never a good sign when a cop keeps visiting any type of borderline-illicit establishment. However, there’s some intrigue here, so it’s no wonder that Ralph’s curious. By now, we’ve been reminded a few times that murder-Terry went to the strip bar (I guess it’s the only one in town because everyone goes there) to change clothes when he got “a bloody nose.” At a loss for more clues, Ralph pores over the CCTV footage while looking for a “game-changer,” and he finally finds one. He becomes convinced that Terry scratched Claude, who previously hasn’t mentioned this to Ralph, and he seems pretty surprised when Ralph asks him about the interaction. However, neither Claude nor a Claude doppelganger went on to commit murder (that we know of). This lead is bound to go somewhere else, even if no games are changed, because Ralph’s gonna lose his mind if it doesn’t yield results.

The evidence of this scratch is so offbeat that it’s somewhat compelling. Actually, we’re not sure how this wound occurred. Heath had a one-breakfast stand (as revealed following sensual-ominous fried-egg eating) with a woman named Maria. Heath’s back was bleeding during sex, and it looks like she sure as hell came into contact with the blood. Or maybe she scratched him deeply enough to draw blood? That would be an interesting twist. Subsequently, both Maria and Heath ended up being convicted for murders in cases that bear startling similarities to Terry’s case. By now, the drill sounds familiar: forensic, eyewitness, and CCTV evidence ties all three of the defendants to two different geographical places on the days of the murders. All of this is entirely bonkers and reminiscent of the classic sex-is-bad horror trope that never seems to die.

It’s no wonder that Holly found herself discussing the case with a bartender, who made a seemingly wild suggestion that prompted Holly to declare, “You can’t catch murder, it’s not a virus.” Well, maybe murder is a bacterium? Anything is possible at this point.

Hear me out here. Believe it or not, I didn’t intend upon discussing the cruelest wedgie of all time again, but it’s chipping away at me because it didn’t happen in King’s book. For whatever reason, Richard Price decided that this wedgie communicates something about Jack’s character, and I’m intrigued to see how that plays out.

It bugs me so much that I’m counting a wedgie as a “scratch” simply so I can discuss it again, but in all fairness, you can’t possibly convince me that this act did not result in a flesh wound. Despite the overall lukewarm buzz so far for The Outsider, people have noticed this wedgie. It has been roundly called out and described as “atomic,” and I have to wonder what the intent was here. Jack Hoskins didn’t deliver this humiliation after receiving his scratch, so we can’t blame a doppelganger. Or a virus. We only know that Jack was angry because his vacation got cut short. I think we need some followup justification because, yes, this is mysterious.

Yes, we need to talk more about freaky Jack. Admittedly, this GIF makes it look like he’s enjoying his post-scratch experience, but let me assure you that this moment is followed by howling noises, although the visuals are obscured by the awful lighting choices of this show. This scratch, which turns into a severe-looking burn, went down in a barn where authorities uncovered a bunch of forensic evidence tied to Frankie’s murder. Also in the barn, Jack howled like crazy, and this appeared to be an extremely violent encounter, but in the book, King wrote the moment differently. In text form, it was as if Jack had only felt that someone had “caressed him with just his fingertips.” Richard Price changed things up for the small screen, probably to make things more dramatic. I’m not sure if that worked, but so far, the ominous nature of Jack’s behavior is working for the story. Aside from Holly, he’s the most intriguing character.

One more thing: in the book (unlike the above scene) Jack looks in the bathroom mirror, and then the reader witnesses evidence of some sort of otherworldly presence. This entity informs Jack that he’s suffering from cancer, and in order to be healed, he must obey commands. In the HBO series, we only see Jack (later on) muttering, “Whatever you need me to do.” Apparently, whatever it is that Jack is supposed to do does not include visiting a doctor, but it makes him love lamps. It’s the most mysterious scratch!